During the month of November, U.S. housing inventory rose 4 percent. However, in the nation’s largest and most expensive metros, inventory increased at a more rapid 9 percent. Seven of the 10 markets posting the largest year-over-year inventory increases are located on the West Coast, five of which are in California.

“The housing market is a Tale of Two Cities as the divergence widens between high-cost, large urban areas, and smaller, more affordable markets,” said Danielle Hale, chief economist for realtor.com. “Buyers in larger metros are seeing more homes on the market and listing prices decline, while those in smaller markets continued to see price increases.”

Nationally, the percentage of listings that saw price reductions increased to 22 percent in November, up from 19 percent a year ago. The increase is being driven by the nation’s largest markets. In fact, 40 of the 45 top markets saw an increase in price reductions. San Jose, Calif., topped the list with the share of price reductions growing by 16 percent, from 17 percent last year to 33 percent in November. It was followed by Indianapolis (+15 percent), Seattle (+12 percent), San Francisco (+9 percent) and San Diego (+9 percent).

The median U.S. listing price grew 9 percent year-over-year to $293,000 in November, down slightly from October, which is in line with the usual seasonal pattern, but higher than last year’s increase of 8 percent.

Of the 45 metros, 35 still saw year over year gains in their median listing price, however only 8 markets outpaced the national growth rate of 9 percent. This indicates that although prices are still increasing nationally, the gains are predominantly from smaller markets. Chattanooga, Tenn. (+17%), Spokane, Wash. (+15%), and Greensboro-High Point, N.C. (+14%) are some of the markets that posted the highest year-over-year median list price growth.

The steepest declines were felt in San Jose, Calif. and Austin, Texas, which were down 4 percent, or $41,000 and $15,000, respectively. Jacksonville, Fla., Nashville, Tenn., Houston, Tampa, Fla., Dallas, and San Francisco also saw declines.

Homes continued to sell at a relatively rapid pace of 71 days on average in November, five days faster than last year. 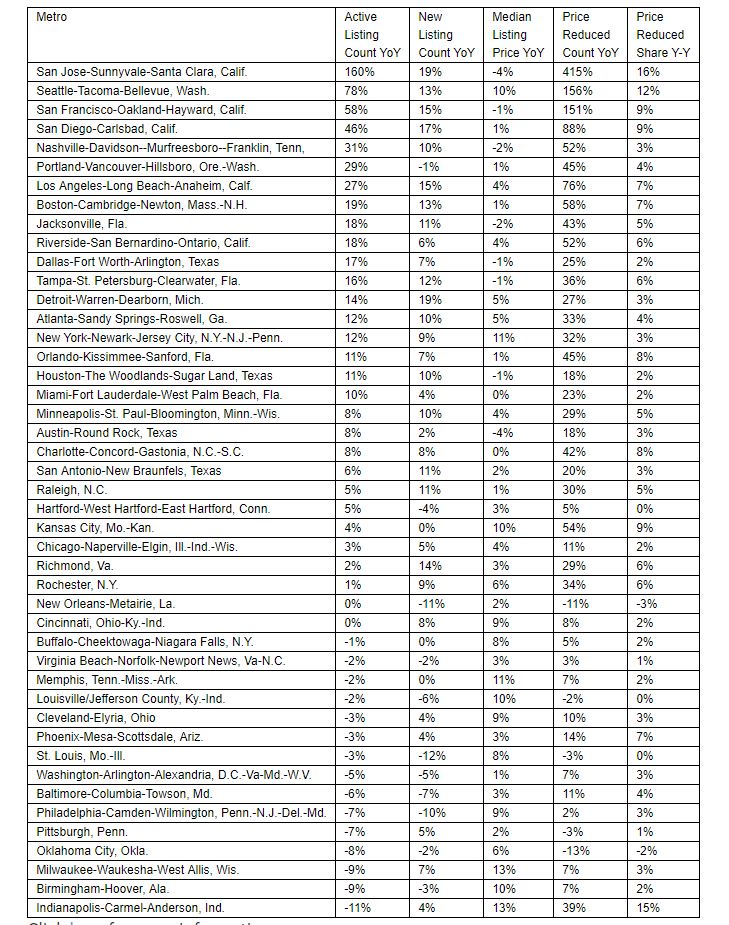 About realtor.com®
Realtor.com®, The Home of Home Search℠, offers an extensive inventory of for-sale and rental listings, and access to information, tools and professional expertise that help people move confidently through every step of their home journey. It pioneered the world of digital real estate 20 years ago, and today is the trusted resource for home buyers, sellers and dreamers by making all things home simple, efficient and enjoyable. Realtor.com® is operated by News Corp [Nasdaq: NWS, NWSA] [ASX: NWS, NWSLV] subsidiary Move, Inc. under a perpetual license from the National Association of REALTORS®. For more information, visit realtor.com®.