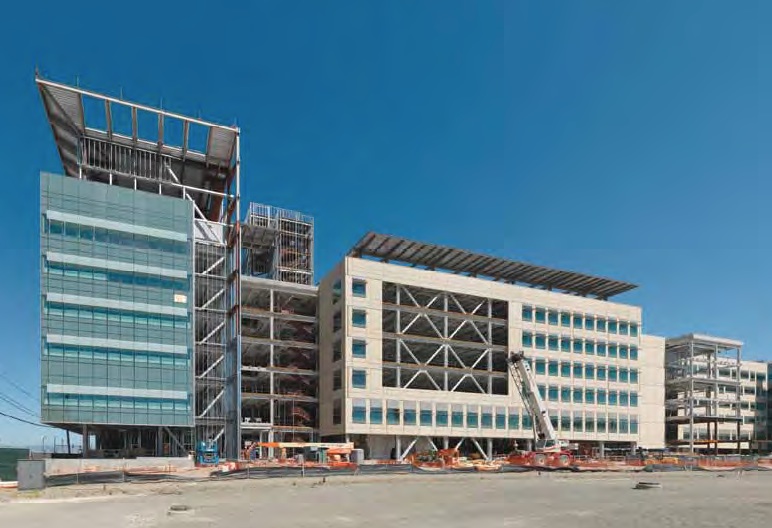 Integrated project delivery takes complex construction to the next level

[dropcap]D[/dropcap]rivers heading into San Francisco on Interstate 280 can’t help but notice the construction activity at Mission Bay. Huge cranes lumber over hulking buildings making workers in brightly colored hard-hats small in comparison. [pullquote_right] “You all win or all lose, so there are a lot of incentives for people to come together.” Atul Khanzode, director of construction technologies, DPR Construction[/pullquote_right]Much less obvious is the quiet revolution in the construction industry that is building Mission Bay’s heart: the $1.5 billion UCSF Medical Center, the 289-bed hospital complex for children, women and cancer patients set to open in 2015. The Medical Center is an anchor for the 43-acre University of California campus at Mission Bay and for the 303-acre Mission Bay redevelopment area where the city seeks to groom the life-science industry.

The construction revolution is called integrated project delivery, and it is an approach to align the interests of owners, architects, designers, contractors and major subcontractors to deliver complex projects smoothly and on time without cutting corners. The goal is to maximize an owner’s value by avoiding delays and cost overruns common to ambitious assignments.

“You have multiple companies—11 or 15—all signing the same contract. It’s called an ‘integrated form of agreement,’ and everyone is pooling their profits and risks together,” said Atul Khanzode, DPR director of construction technologies. The contractor has five large IPD-managed projects ongoing in the region, excluding the Mission Bay hospital.

“You are creating a situation where everyone is rooting for everyone to succeed,” Khanzode said. “You get rid of the zero-sum game, where your losses are my gains. You all win or all lose, so there are a lot of incentives for people to come together.”

IPD is an outgrowth of lean manufacturing ideas pioneered in the 1950s by automaker Toyota Motor Corp. It has been boosted by research at Stanford University and the University of California, Berkeley, and is electronically powered by Silicon Valley software.

As much as anything, IPD is about changing behavior. The common contract takes a lot of negotiation and, for subcontractors new to the concept, some persuasion. “What I did like about the process is that everybody has a piece of skin in the game,” said T.J. McClenahan, president of plumbing contractor J.W. McClenahan Co. The company is working with DPR on the $300 million Alta Bates Summit Medical Center Patient Care Pavilion in Oakland scheduled to open in 2014. The pavilion is to have 238 acute-care beds and involves a 12-party IPD team.

“Putting your profit pool at risk, where the owner would guarantee cost and overhead, was intriguing to us. You have an owner willing to step to the plate and work in a collaborative effort for the betterment of the project,” McClenahan said.

But while IPD spreads risk, it doesn’t eliminate it. If a project still runs over budget despite an IPD approach, the contractors must relinquish all of their profits before the owner picks up the tab. And it doesn’t work everywhere. Because the 878,000-square-foot UCSF Medical Center is a state project, the law requires competitive bidding. That meant individual contracts that aren’t quite pure IPD, even though the work follows IPD practices.

IPD relies heavily on previous transformations in the construction industry, including building information modeling, or BIM, which allows professionals to design and construct a project virtually using computers to reveal design flaws before a shovel of dirt is turned. It’s possible to do IPD without building information modeling, but it’s hard to achieve much, Khanzode said.

Even though software to allow BIM has been around for at least a decade—San Rafael-based vendor Autodesk Inc. can tout years of product development and use—it has not yet become the industry standard, according to Pike Research, a global clean-technology market research and consulting firm. “For those who are, or have been, using BIM tools and collaboration techniques for a longer period of time, BIM has proven to be remarkably successful in the quality of the results that it can produce,” said authors Tom Machinchick and Eric Bloom in the Pike report issued earlier this year. “As for building owners and financiers, BIM has driven costs down and made the estimation process more accurate.”

Yet in one other key aspect, integrated project delivery shoves technology aside in favor of direct human contact. For the Mission Bay medical center, more than 100 people from 19 companies came to the site 20 months before groundbreaking so that they could deal with one another efficiently and directly to design the building—of course using BIM—and chart the process of actual construction. Officially their offices are called the Integrated Center for Design and Construction. Informally, everyone calls it “the Big Room.”

“Instead of playing phone tag, you can walk over and talk to somebody and say, ‘This is what we were looking at. What are your thoughts on it?’” said Rick McClain, a partner and Healthcare Group leader for Redwood City Electric Inc., which is working on both the Alta Bates and Mission Bay projects.

The Big Room at Mission Bay started out as 17 connected construction trailers. It has grown to 43 to accommodate more and more people as companies come onboard to complete their work.

“If you have both cost and schedule predictability, those are ultimately savings of historic importance” for a building owner, said Jason Bredbury, regional design manager for construction firm Skanska USA Building Inc., whose current IPD projects include the Palo Alto Medical Foundation’s San Carlos Center. “The other thing that is important and sometimes overlooked is the ability of the collaborative team to design value into the project.”

One of the tenets of IPD is that you don’t reduce costs by reducing the scope or quality of the baseline project, he said. Rather, you figure out how to build it better within the budget. The first proponents were health care organizations because medical buildings are often complex, said George Hurley, project executive with DPR.

That complexity is compounded by California’s earthquakes and the Office of Statewide Health Planning and Development, which must grant multiple approvals. It’s a lengthy process, and it’s not unusual to start construction with state approvals pending. With all the front-end work involved in IPD, it is possible to resolve all issues beforehand and start construction with no deferred approvals hanging over the project.

IPD began largely as a West Coast phenomenon, but it has spread through Arizona, Texas, South Florida and up the mid-Atlantic, Hurley said. It’s also catching on in Europe.

Several influences accelerated its early adoption in California. In addition to being home to technology innovators, the state is a locus of related academic research. Stanford University has the collaboration between its civil engineering and computer science departments, the Center for Integrated Facilities Engineering. UC Berkeley, meanwhile, has both the Project Production Systems Laboratory and the Lean Construction Institute.

“It’s kind of a chicken-and-egg thing,” Bredbury said. “It was initially born of proximity to the Berkeley and Stanford departments. Now I think it is sort of a self-reinforcing thing. Projects in proximity to those institutions offer additional subject research, and the research moves the thinking forward. It amplifies itself.”

While the whole point of IPD is to discuss and eliminate risk, there is always a chance of finding surprises on the job site. But with IPD, the process is already in place to quickly deal with them in the Big Room. “The teaming around a discovery causes the solution to be much faster than if you were dealing with it in silos,” Hurley said. That takes leadership, which usually comes in the form of a core team made up of senior managers from each company, he said. They meet on a regular basis and set all the other timetables.

“If there is a dispute, the core group can escalate it to a senior management group, which is principals only,” Hurley said. On the Alta Bates project, that would be Eric Lamb, executive vice president at DPR; Bob Mitsch, vice president of facility planning and development for Sutter Health; and a top executive from architecture firm Deveney Group Ltd.

Nor is IPD a panacea. “It may not lend itself to a fast-track project where you are just going to blow and go, like tilt-ups,” said Redwood City Electric’s McClain. “But where there is a lot of detail, as in hospitals and labs, you are going to get the benefit of not having the change orders and requests for information that are associated with a traditional job.”