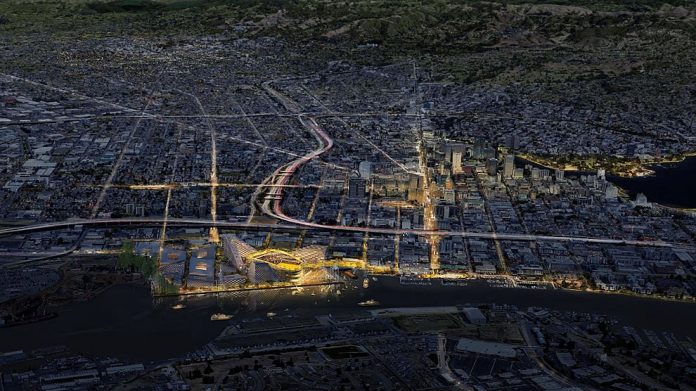 SAN FRANCISCO (May 29, 2019) — A proposal by the Oakland A’s to build a privately financed waterfront ballpark at Howard Terminal near Jack London Square would generate $7.3 billion in economic benefits over 10 years for Oakland and Alameda County and create more than 6,100 permanent jobs, according to an analysis by the Bay Area Council Economic Institute.

“The Oakland A’s plan represents a transformational investment for the city,” said Jeff Bellisario, Director of the Bay Area Council Economic Institute. “The economic benefits of a project this size will ripple throughout the Oakland community for many years.”

The analysis tallies the economic and jobs benefits from the ballpark and proposed development that would surround the stadium, including 3.3 million square feet of housing, 1.5 million square feet of commercial and office space, a hotel, a performance center and a variety of retail, cultural and civic uses. The $7.3 billion in economic benefits translates to $902 million a year. The ballpark alone would generate $3 billion of the overall economic benefits, largely from increased spending.

In addition to the ongoing benefits from a new waterfront ballpark and development, there would be considerable one-time jobs and economic impacts from construction that were not included in the analysis.

The analysis also does not include the economic and jobs benefits from a proposed gondola system to connect the ballpark with downtown Oakland. A separate Economic Institute analysis found that a gondola would generate $685 million in economic benefits and serve more than 1 million riders per year at full capacity.

The Bay Area Council Economic Institute is a public-private partnership of business, labor, government and higher education that works to foster a competitive economy in California and the San Francisco Bay Area, including San Francisco, Oakland and Silicon Valley. The Economic Institute produces authoritative analyses on economic policy issues affecting the region and the state, including infrastructure, globalization, energy, science and governance, and mobilizes California and Bay Area leaders around targeted policy initiatives. Learn more at www.bayareaeconomy.com.