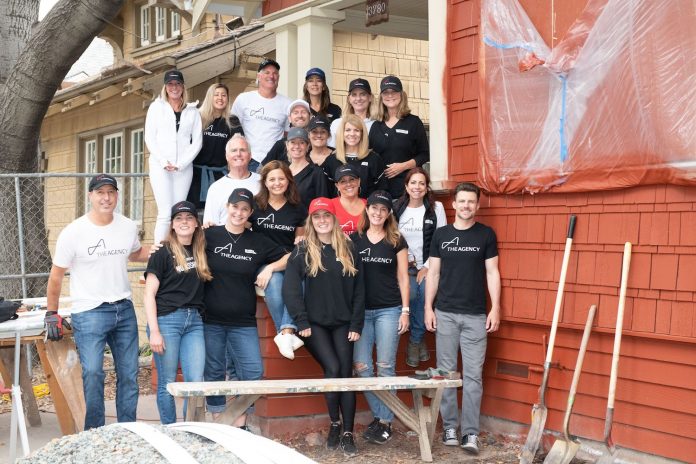 Oakland is home to thousands of people experiencing homelessness, but thanks to the efforts of The Agency and a recent Build Day with Giveback Homes, two families have found places to call their own. Twenty-two staff and agents from The Agency’s Northern California offices, including The Agency’s President, Rainy Hake Austin, teamed up with Habitat For Humanity earlier this month to transform two neglected properties into affordable housing and help community members in need find stability and unlock their full potential through first-time homeownership.

Located on Manila Avenue and originally owned by the adjacent hospital, the homes had sat vacant for over a decade. To the delight of many neighbors, Kaiser generously donated the residences to Habitat For Humanity East Bay/Silicon Valley to be repaired, renovated, and given to families earning low and moderate incomes along with deed restrictions that protect the long-term affordability.

Volunteers from The Agency eagerly tackled the improvements, installing flooring, putting in a French drain, caulking windows, and setting up an air purifier gifted by Delos. In the spirit of making the most of underutilized resources, they also repurposed bricks from a chimney to create a walkway. With a combined 176 hours of service, the team helped complete one of the two residences, where a couple plans to raise their 12-year-old son. Construction on the other home will wrap in August.

California wrestles with a severe lack of affordable housing, particularly in the Bay Area. In Oakland, the median price for a single-family home is $775,000, which means someone making minimum wage would need to work four full-time jobs just to cover their mortgage. This generates a host of other issues ranging from overcrowding and rental instability to unsafe living conditions. The Agency partners with Giveback Homes on philanthropic efforts to help alleviate these stresses on society and create more resilient communities.