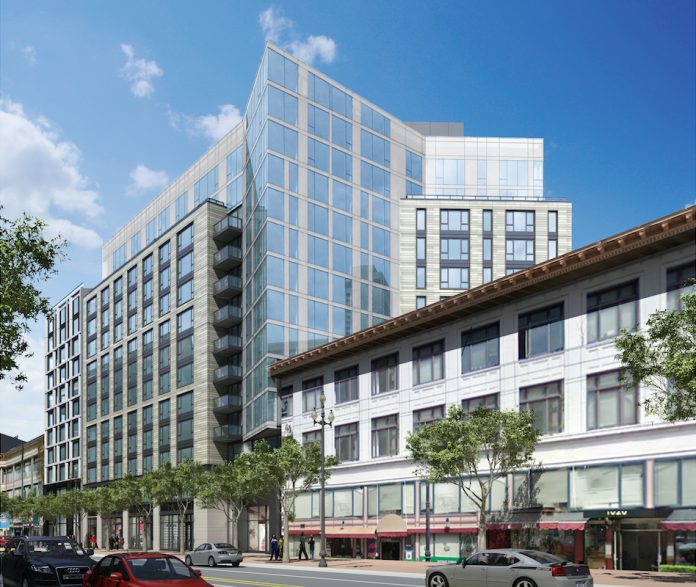 (EDITOR’S NOTE: The development cost of this project is expected to be in excess of $100 million, according to sources familiar with the development details.)

San Francisco, CA – October 7, 2019 – Olympic Residential Group (Olympic) and Tidewater Capital (Tidewater) will break ground today on a 13-story residential mixed-use development at 1028 Market Street in San Francisco, California, consisting of 193 for-rent apartment homes and approximately 6,000 square feet of ground-floor retail. The development is ideally located in the city’s rapidly evolving Mid-Market corridor and is a short walk to Downtown San Francisco, Union Square, SoMa, and the Civic Center. The site was acquired by Olympic, in partnership with Tidewater Capital of San Francisco, in February 2019.

The development team will pursue LEED Silver certification for the Solomon Cordwell Buenz (SCB)-designed building. The 193 Class-A apartments are composed of a mix of studio, one-bedroom, two-bedroom, and three-bedroom units ranging in size from approximately 340 to 1,275 square feet. Complemented by modern and sophisticated interior design by IwamotoScott Architecture, the building’s amenities include a lobby lounge, club room, fully equipped fitness center, and a 5,000-square-foot roof deck with panoramic views of San Francisco, a fire pit, grill, and patio furniture. The development includes 26 below market rate units.

The Mid-Market neighborhood has experienced a transformation in recent years, with a surge in new businesses, hotels, and housing construction. Twitter, Zendesk, and Dolby are all headquartered in the area, with Uber, Square, and other tech companies taking up significant office space nearby. The Proper Hotel opened at 45 McCallister in 2017, and hotel company Yotel opened its first San Francisco location at 1095 Market in early 2019. Currently under construction nearby are Shorenstein’s 1066 Market, a 303-unit residential building with 4,400 square feet of retail; Group i’s 950 Market, with 242 residential units and a 232-room The Line Hotel; and the final phase of Trinity Place at 1177 Market, which will bring 502 residential units and a 55,000-square-foot Whole Foods (San Francisco’s largest) to the neighborhood.

Olympic was founded in 2012 by Dan Deibel, a Bay Area multifamily development veteran who was formerly the Managing Director of Palo Alto-based Urban Housing Group and has held executive construction and development positions at Sares-Regis Group.

“We are excited to bring much-needed housing to San Francisco, especially to such a burgeoning neighborhood with great access to BART, Muni, and bicycle lanes,” Deibel said. Deibel was instrumental in developing several Mission Bay buildings during his time at Urban Housing Group, including Venue, Strata, and Edgewater.

Capitalizing on the site’s central location and excellent transit access, the development does not include any vehicle parking spaces and will provide 124 secure bike storage spaces for residents. Approximately 5,200 square feet of the retail will be along Market Street including the potential for a 2,500- to 3,000-square-foot restaurant. There will be an additional 800 square feet of neighborhood-serving retail along Golden Gate Avenue. The site was formerly the home of The Hall, a popular food hall, bar, and community space that Tidewater operated from 2015 to 2017.

“This neighborhood has a rich history and an array of unique San Francisco institutions, from the Golden Gate Theatre to Aunt Charlie’s Lounge,” said Olympic’s Development Director Adam Tetenbaum. Tetenbaum also serves on the Board of Directors for the Tenderloin Museum and the Tenderloin Community Benefits District, two nearby non-profit organizations. “We look forward to joining the long list of exciting new businesses and residents that have come to the neighborhood in recent years.”

The general contractor is Build Group Inc. of San Francisco. Completion is expected in late 2021.

Founded in 2013, Tidewater Capital is a San Francisco-based real estate investor, developer and operator with expertise across office, residential, retail, hotel and industrial asset classes. The firm is exclusively focused on the Bay Area and manages a portfolio of approximately $500 million in assets. Tidewater’s investment philosophy is grounded in creating value for all stakeholders and generating positive impact in the communities in which it works.