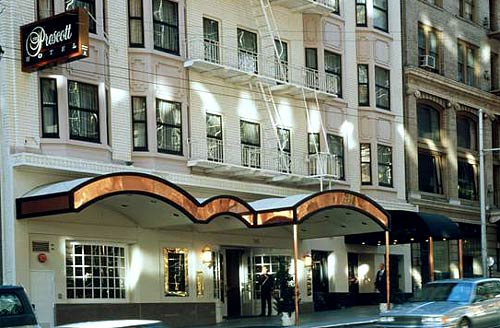 BETHESDA, Md.-Pebblebrook Hotel Trust (NYSE:PEB) (the “Company”) today announced that it has acquired the Prescott Hotel for $49.0 million. The 160-room hotel is located in the heart of Union Square in San Francisco, California. The property will continue to be managed by Kimpton Hotels & Restaurants (“Kimpton”).

“We’re excited about our acquisition of the Prescott Hotel and our opportunity to further expand our already strong presence in the highly desirable San Francisco market,” said Jon Bortz, Chairman and Chief Executive Officer of Pebblebrook Hotel Trust. “Just one block west of Union Square, this hotel, which represents our sixth hotel investment in San Francisco, is attractively located in the city’s world-renowned shopping and entertainment district. The property is central to San Francisco’s primary business demand drivers, including the Financial District, the Moscone Convention Center and the Union Square submarket, which has historically outperformed all other submarkets within San Francisco due to its well-balanced, diversified mix of leisure, corporate, group and convention demand.”

In 2013, the Prescott Hotel operated at 88 percent occupancy, with an average daily rate (“ADR”) of $206 and room revenue per available room (“RevPAR”) of $181. During the next 12 months, the Company currently forecasts that the hotel will generate earnings before interest, taxes, depreciation and amortization (“EBITDA”) of $3.2 to $3.8 million and net operating income after capital reserves (“NOI”) of $2.7 to $3.3 million.

The Company plans to undertake a comprehensive renovation and repositioning of the hotel sometime between 2015 and 2016, including all guest rooms, bathrooms and public areas. The property’s design will be overseen by Dawson Design Associates, the same design team that helped reposition the Company’s Hotel Zetta and that is helping reposition the Company’s Radisson Hotel Fisherman’s Wharf, both of which are also located in San Francisco, California. The full scope and timing of the renovation are not yet fully defined, but concept and design work will commence shortly.

“We are thrilled with the opportunity to creatively reposition the Prescott Hotel,” noted Mr. Bortz. “We believe a renovated and repositioned product will be positively received in the vibrant Union Square market and the comprehensive nature of the repositioning will bring a new and unique guest experience to San Francisco – stay tuned.”

“We’re pleased with the opportunity to expand our very successful relationship with Kimpton Hotels & Restaurants,” continued Mr. Bortz. “Their strong track record, market knowledge and extensive experience in operating high-quality boutique properties such as the Prescott Hotel gives us immense confidence in the future for this property.”

“We are delighted to be furthering our relationship with Pebblebrook Hotel Trust,” said Kimpton’s CEO and President, Mike Depatie. “Our successful relationship continues to grow, and we look forward to further collaborative successes.”

The acquisition of the Prescott Hotel brings the total number of properties in the Company’s portfolio to 30 and marks the Company’s sixth investment in San Francisco, California.

About Kimpton Hotels & Restaurants
San Francisco-based Kimpton Hotels & Restaurants is the leading collection of boutique hotels and restaurants in the United States and the acknowledged industry pioneer that first introduced the boutique hotel concept to America. In 1981, Bill Kimpton founded the company that today is renowned for making travelers feel genuinely cared for while away from home through thoughtful perks and amenities, distinctive design that tells a story and inspires a sense of fun at each hotel and a sincerely personal style of guest service. Out to help people live full, balanced lives, Kimpton aims to inspire with touches like yoga mats in every room, complimentary coffee and tea to start the day, hosted evening Wine Hour, in-room fitness programming and complimentary bike rentals. The award-winning restaurants and bars are led by talented chefs and bartenders that offer guests a chance to dine like a local. Kimpton also leads the hospitality industry in eco-friendly practices that span all hotels and restaurants, and is consistently ranked as one of the top companies in the Market Metrix Hospitality Index, Upper Upscale Segment, for Customer Satisfaction. The company is highly-regarded for its innovative employee culture and benefits and has been named a Fortune magazine “Best Place to Work” five times since 2009. Kimpton is continuously growing and currently operates 61 hotels and nearly 70 restaurants, bars and lounges in 26 cities. For more information, visit www.KimptonHotels.com and www.KimptonRestaurants.com.