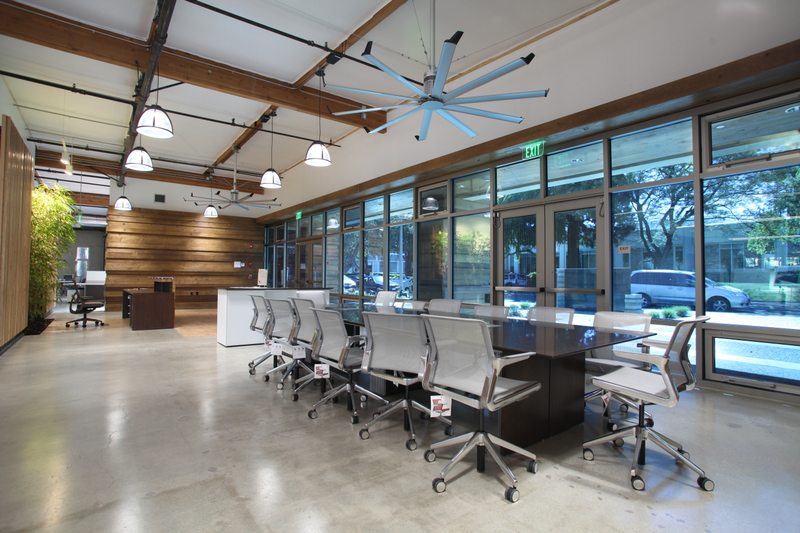 As a template of sustainable achievement, a R&D building in Sunnyvale gets a new life

[dropcap]I[/dropcap]nside and out, the concrete tilt-up building at 435 Indio Way in Sunnyvale bears no resemblance to the 1970s vintage R&D structure that it once was. The 32,000-square-foot building had stood empty since 2006 along a U-shaped street lined with laboratories and warehouses. Sonora-based Sharp Development gutted it but saved the materials to re-create the building, which rises from the site like some sort of edificial phoenix.

“Over 93 percent of the material that was demolished from the old building was repurposed into this project,” said Kevin Bates, president of Sharp Development. Slate was removed from the exterior walls and converted into seating walls in the outdoor patio. Concrete trench material from the slab was used to form the sides of a monument sign outside. Sections of wood roof beams cut out for the skylights were used for the lobby floor, benches and towel racks in the showers.

The recycled material is just one of the many elements that make this building a showcase of workplace sustainability. It also is being touted as a net-zero structure, meaning it generates as much energy through renewable sources as it consumes.

Sharp also set out to show this type of construction could be affordable, even profitable. “The cash flow is significantly better than if we did a standard renovation,” Bates said. “We don’t have a power bill. We’ve driven operating expenses down.”

[quote]“The cash flow is significantly better than if we did a standard renovation.” Kevin Bates, Sharp Development[/quote]

Bates said this uber energy-reducing renovation added $56 per square foot in value to the building compared to a typical rehabilitation. That added value exceeds any additional expense by $8 per square foot, he said.

Inside, large fans keep the air circulating steadily while operable windows let in outdoor breezes. Skylights help maximize daylight harvesting. From the outside, the single-story building features a sleek shell, textured brown columns and large glass-panel entryways. The roof is laden with solar panels, and the windows use Milpitas-based View’s dynamic glass solution that transitions from clear to tinted depending on the sun’s angle to eliminate glare and heat while maintaining outdoor views and a comfortable indoor temperature.

The building has an open floor plan, and the exposed beams, ducts and pipes enhance the openness and airy quality of the space.

Certainly, the project’s level of sophistication posed some design and engineering challenges. With all the concrete used in the building, there were acoustical issues. Part of the solution was installing wood-picket walls that absorb sound but still appear aesthetically pleasing.

Another challenge was harmonizing the technology that controls the various mechanical elements from the windows to fans. For that, the team developed a management system integrating different applications. “Getting it all coordinated took a ton of engineering,” Bates said.

Now that the challenges have been addressed, Bates said this level of sustainable renovation could be replicated fairly easily. In fact, he is involved in a similar effort right next door with a two-story, 34,000-square foot building.

People usually gravitate toward successful projects and try to duplicate them, said Jeff Arrillaga, a Cornish & Carey leasing broker for 435 Indio. Soon after completion it drew “a great amount of interest” from prospective tenants, brokers and developers, he said. The project “created something that really resonated with tenants in the marketplace,” Arrillaga added. “A lot of it has to do with the hiring of engineers. It’s how you create an environment that engineers want to work in.”

Indeed, today’s generation of highly skilled employees expects “a certain level of environmental authenticity,” said Randy Howder, a principal and workplace strategist at global design firm Gensler. “If a company shows it is responsible to the environment, it shows how responsible it is in treating its employees.”

As of early February, 435 Indio was unoccupied, but lease negotiations were under way with a prospective high-tech tenant. Bates would not reveal what rent the space was potentially fetching. Even now that it’s off the market, multiple developers are still intrigued by the building while other prospective tenants have lined up in case the current lease negotiation falls through, he said.

While big Silicon Valley companies have been designing many of the same sustainability and productivity strategies into their offices, 435 Indio shows it can be done at a price that makes sense on a smaller scale. This tells small and mid-sized companies that “they can compete and grow their business with an inspiring workplace that’s healthy and socially responsible,” said Ken, president and CEO of Hillhouse.