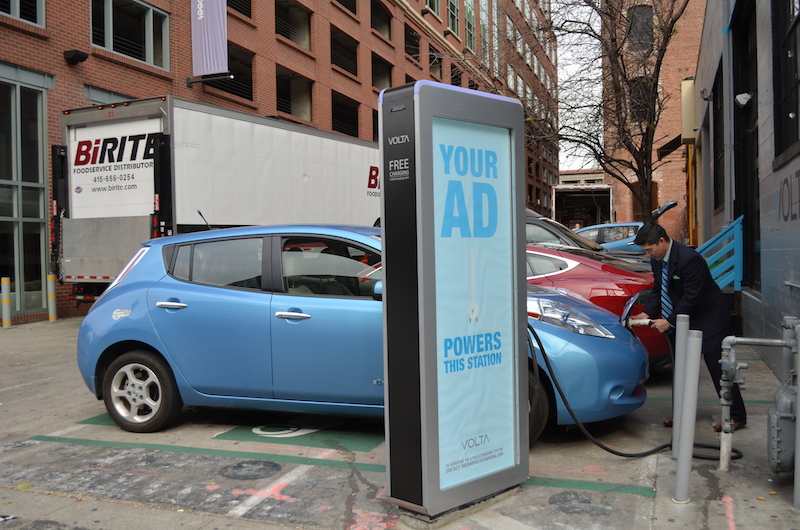 San Francisco-based start-up is poised to change the way cars are charged at retail locations.

[dropcap]V[/dropcap]olta Industries may soon bring its free-to-use charging stations for electric cars to a mall near you.

In January the startup moved its headquarters to San Francisco from Hawaii, where it launched in 2010 and now operates 22 charging stations at shopping centers and other locations on the island of Oahu.

Stoked with $2.5 million from angel investors and venture capital institutions in Hawaii and California, Volta is aiming for a major expansion in the Bay Area and other electric vehicle hotspots on the mainland. By the end of this summer, Volta co-founder Scott Mercer said, the company expects to have 100 of its electric charging stations up and running, up from the 30 now operating in San Francisco, Los Angeles, San Diego and Phoenix.

Finding locations with high visibility and an upscale clientele is key. “We want to move quickly… there’s a bit of a real estate land grab here,” said Mercer. “It’s just about going after the best properties in California and making sure that we lock them down. That’s important to the business right now.”

[quote]“It’s rare that I see one available, and that’s a good thing,” Fred Paine, general manager at Oahu’s Pearlridge Center[/quote]

In the Bay Area, General Growth operates Eastridge Mall in San Jose and San Francisco’s Stonestown Galleria Mall. General Growth would not comment for publication about the potential addition charging stations at its Northern California properties.

Volta has also installed electric vehicle charging centers at Whole Foods Market stores in Hawaii and Southern California. “Overall, we see the EV charging stations getting a lot of use, and an additional benefit to our customers is that they are free to use,” said Whole Foods Market spokeswoman Hilary Maler in an email. “The feedback we have received is that our customers love having them.”

What sets Volta apart from other companies that power up vehicles? It doesn’t charge motorists to top off their car batteries. And, other than minimal costs associated with installation, property owners don’t pay anything, either. Installing each station costs Volta between $20,000 and $40,000, depending on the location.

Volta covers the cost of electricity and maintenance for the charging units.

“All of our revenue comes out of the advertising side of the business,” Mercer explained.

This year, the company expects to bring in about $2 million to $3 million in revenue, but is not yet profitable and is seeking Series A venture funding.

Starting in 2012, Hawaii law began requiring public places with 100 or more parking spaces to have at least one electric vehicle charging station. “EV drivers quickly learn the whereabouts of free stations and seek them out,” according to a 2012 guidebook prepared by non-profit Plug In America for the state of Hawaii. “They also frequently reward site hosts by shopping at their businesses and suggested that fellow drivers do the same.”

Volta selects its charging station locations based on traffic and wants only highly visible space.

“We don’t have a charging network that’s in the back of the corner of some library,” Mercer said. “We have stations that are front and center in really good locations, and they’re getting used 8 or 10 or 12 hours a day.”

Volta prices its 35 million network views from its 65 stations at an average CPM (cost per thousand) of $2.75 and signs companies to advertising deals lasting about one year. Ad rates vary, depending on how many people are likely to see the station, Mercer said.

In Hawaii corporate sponsors include banks, insurance companies, solar firms, health care businesses and financial services companies. Mercer said the sponsor network for the new stations on the mainland would not be announced until those locations officially open.

The units are popular at Oahu’s Pearlridge Center, a busy, 1.4 million square foot mall about the size of Westfield Valley Fair. It started out with two Volta charging stations in 2012 and now has five, all located in premium parking spots right at the mall’s entry doors. The center, owned by Glimcher Realty Trust, is considering adding more Volta charging units. 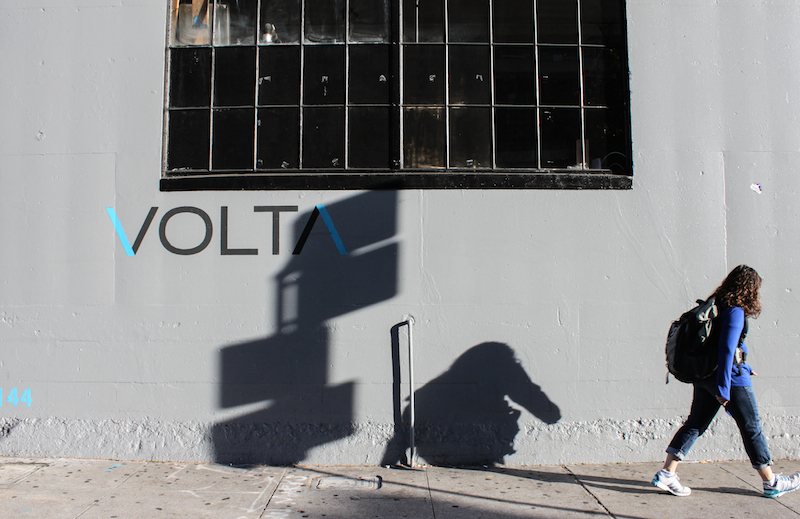