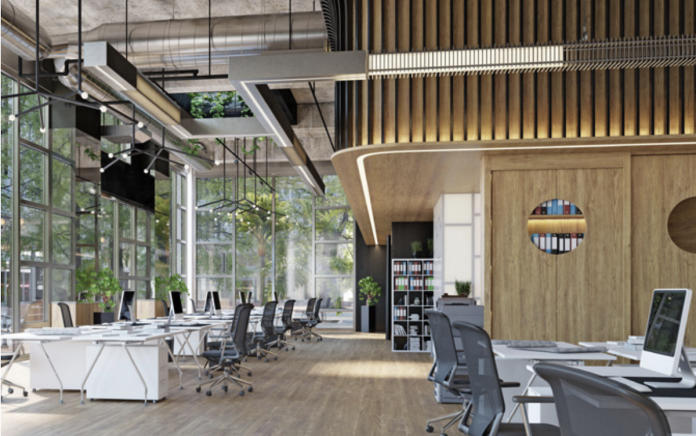 Throughout the course of the COVID-19 pandemic, work environments have undergone drastic changes as many began working from home. Like many areas of the office sector during this time, flexible office space took a significant hit. However, a recent report from CBRE, which analyzed this year’s outlook on the sector, shows that the sector could begin seeing new demand as employers shift office locations to accommodate new styles of working.

“Flexible office space is actually proven to be very resilient despite being challenged on so many levels during the pandemic,” said Julie Whelan, CBRE’s global head of occupier thought leadership. “Provider data along with our own market intelligence is actually telling us that this niche sector is really waking up from what we would describe as a temporary slumber to emerge stronger and more sophisticated than ever.”

According to the report, the flex sector – or office space leased for shorter than traditional terms – saw a significant slow down during the pandemic. Looking at 49 markets in North America, CBRE found that flex-space providers decreased square footage nationwide by nine percent to just over 80 million square feet. At the same time, the sector also saw a decrease in its overall share of office space, from two percent at the end of 2020 to 1.75 percent the following year.

However, many markets are continuing to see new flex options become available, particularly in suburban markets. Of all markets surveyed, 15 recorded a net expansion of their flex square footage by the third quarter of 2021, 28 saw a decrease and six saw no change. Suburban Maryland and Houston saw the largest expansions, reporting a 5.9 percent increase 5.2 percent increase, respectively.

While many suburban markets saw the most rapid growth, several West Coast markets continue to lead the charge as the largest flex space markets. The Greater Los Angeles area, for instance, is the fourth-largest flex space market, with 4.7 million square feet of flexible work space. At two percent, the region also was ranked 10th in terms of market penetration, or the share of flex space in the larger office market.

The eighth largest flex space market is San Francisco, with 2.7 million square feet of flexible work space. It also maintains the second-highest level of penetration, with flex-office space representing a 3.2 percent share of the city’s total office market. However, at the same time, the market also saw a significant decrease – approximately 959,000 square feet – in flex space during the pandemic, the third-greatest net loss of flex space.

The flexible-office sector in the Puget Sound region, including Seattle, Bellevue and Tacoma, also saw a decline in flexible office space. With a decrease of 624,000 square feet of flex space, the region saw the fourth-highest decrease of all markets surveyed. Despite this, the Puget Sound remains the 12th largest flex space market, with two million square feet of flex space, or approximately 1.8 percent of the overall office market.

“When you look at the size of the flex market being under two percent nationally, with the most penetrated markets still being under four percent, and you look at the type of growth small, medium and large companies are willing to put into flex, that is going to be quite the tail wind for a lot of these flex providers to make sure they have the right amount of flex space in the right place at the right time and that is certainly the challenge they have ahead of them,” Whelan said.

38 percent of large enterprise occupiers surveyed by CBRE report that they are using flex space to test alternative workspace models. Moving forward, enterprise users are expected to be a major consumer of flex office space across the board. WeWork, for instance, reported that nearly half, or about 2,300, of its customers are enterprise users. Additionally, IWG reported 2 million new customers in 2021, 81 percent of which were Fortune 500 companies.

The flex sector is expected to continue seeing new levels of growth in the coming years as more large companies continue to explore new workplace layouts. In a survey of 185 U.S.-based companies, CBRE found that more than half are expected to add more flex space by 2023.

“We actually expect in 2022 that flexible office space will be back in growth mode, given the economic expansion we’re in, subsequent job growth underway and most importantly, the historic shift underway which will absolutely promote growth in the sector,” Whelan said.