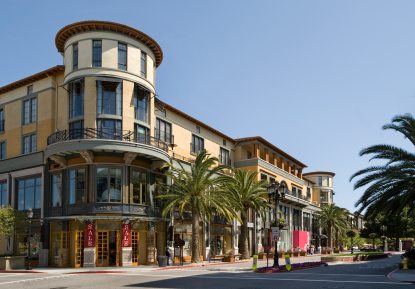 Washington, D.C.-based Republic Urban Properties has secured more than $8 million in financing to forward the development of its Meridian apartment complex at 1400 W. San Carlos St. in San Jose. The total cost of the project is an estimated $60 million.

The development is to consist of 218 apartments over 14,000 square feet of retail on 3.5 acres. Construction is expected to start in July. 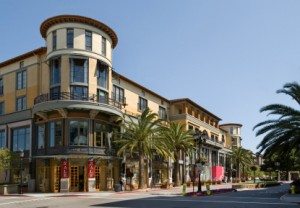 New York City-based Pembrook Capital Management LLC has extended an $8.34 million first mortgage, structured as a bridge loan, to cover the acquisition of 2.4 acres for the apartment portion of the development and to complete the assemblage of the 3.6-acre site.

Michael Van Every, a senior vice president and managing partner for Republic Urban in San Jose, said the project’s location is exceptional and should allow it to draw residents from rapidly growing nearby companies including Apple Inc. and Google Inc. “It’s ideally situated between downtown San Jose and Santana Row (pictured),” he said.

Silicon Valley is the top-ranked apartment market in the country this year, according to a forecast for 2012 from Marcus & Millichap Real Estate Services. Apartment vacancy is projected to fall below 3 percent this year for the first time since the dot-com boom. Rents are expected to rise almost 7.5 percent to nearly $1,550 a month.

Neil Bo, a principal and managing director of investor relations for Pembrook, said it is the company’s first San Jose foray. The lender is drawn by the region’s low apartment vacancy rates and job creation. Silicon Valley will lead California this year in job growth, with employers adding 28,000 jobs on top of 26,000 positions created in 2011, Marcus & Millichap predicts. “This project is in an infill location, which we like to be involved with as it creates a nature barrier to entry for future competing projects,” Bow said.

Republic Urban is now talking with Bank of the West to try to secure construction lending. The developer believes it will take not quite two years for the project to be built. “The main renters will be young professionals who work near where the project is located,” Van Every said. The complex is planned to have a linear park, a swimming pool and a community room. It is located in the city’s gentrifying Midtown district immediately north of Willow Glen, an older, upscale single-family San Jose neighborhood with a popular commercial corridor of shops and restaurants.

That $250 million development features buildings as tall as 14 stories and is planned for 800 residential units and up to 30,000 square feet of retail. The first phase is planned to be 200 homes. The developer hopes to start construction next year. The development is located next to a planned light-rail station.

Pembrook would like to finance other projects in San Jose or San Francisco, Bo said. The company considers office, apartments and anchored and un-anchored shopping centers situated in infill locations. It invests in existing properties, recapitalizations or new development. Most of its loans are written at a 75 percent loan-to-value ratio.