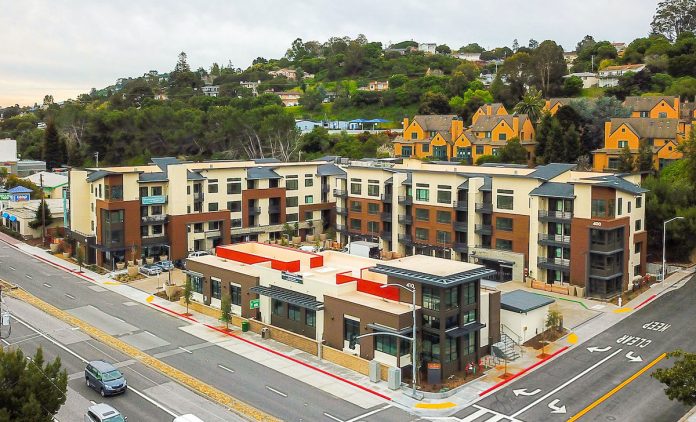 (EDITOR’S NOTE: According to public records filed with the county, the property sold for $4,470,000 on November 22nd, 2019. The buyer was an entity associated with the Kim F. Hong Trust.)

Sares Regis Group of Northern California (SRGNC) has closed escrow on a fully leased retail center at The Ashton, a new luxury condominium community in Belmont. Developed by SRGNC affiliate Regis Homes Bay Area, The Ashton has sold out of its 74 residences. The one-story, approximately 4,900-square-foot retail center is currently leased to Bank of America, Row House, and Apizza.

“We’re grateful that we have been able to enliven El Camino Real with the addition of new retail and housing,” says Jeff Smith, Senior Vice President of Residential Development at SRGNC. “As we hand off this retail center, we’re confident that these businesses will thrive and become a true amenity to the existing neighborhood and the new residents and guests of The Ashton.”

The Ashton broke ground in late 2016, began selling homes in late 2018, and has since sold all of its 74 homes across two four-story residential buildings. The transit-friendly property is located in the City Center neighborhood of Belmont at the prominent corner of Davey Glen Road and El Camino Real and is near highway 101 and within walking distance of the Belmont Caltrain station.

Sares Regis Group of Northern California and its affiliates, Regis Homes Bay Area and Regis Contractors Bay Area, are regional companies based in San Mateo, California. As leading developers and managers of commercial and residential real estate in the western United States, the companies have more than 6.5 million square feet of commercial properties valued at $500 million and over 2,800 residential units under development.  Since its inception, the company has acquired or developed approximately 46 million square feet of commercial properties and 20,000 multifamily and residential housing units.

ABOUT TRICON CAPITAL GROUP INC.
Tricon is a principal investor and asset manager focused on the residential real estate industry in North America with approximately $5.6 billion of assets under management. Tricon invests in a portfolio of single-family rental homes, for-sale housing assets and purpose-built rental apartments, and manages third-party capital in connection with its investments. Our business objective is to invest for investment income and capital appreciation through our principal investment business and to earn fee income through our Private Funds and Advisory business. Since its inception in 1988, Tricon has invested in real estate and development projects valued at approximately $20 billion.