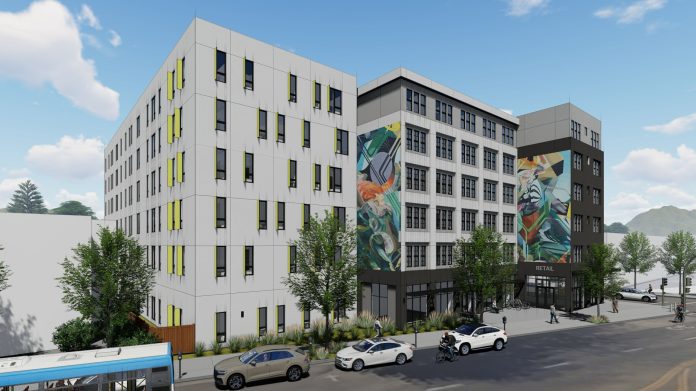 Oakland-based Riaz Capital has filed a preliminary development application with the City of Berkeley for a new multi-family development project located at 3030 Telegraph Avenue, according to information provided by the City’s Planning Department.

Although the development cost for the project has still not been finalized, the development team is hoping to kick off construction in the near term. “We are hopeful that we could potentially start our development sometime in 2024 and have an 18-month time period from start to finish,” says Lisa Vilhauer, vice president of design and entitlement for Riza Capital.

This location has several things going for it, but its strong location is certainly a feature that will be appealing to prospective tenants. “We are close to several amenities in the area that our residents could enjoy. These would include being near BART, a Whole Foods grocery store and having a direct shot to UC Berkeley through Telegraph Avenue,” said Vilhauer.

The proposed land uses for the property would be to construct a six-story development with a total of 113,190 gross square feet. The multi-family portion of the project would include 174 units that would take up five stories of the building. The plans also call for 1,920 square feet of ground-floor commercial or retail space.

Riaz is working with Left Coast Architecture to design and develop the project.

There are existing structures on the site that need to be demolished to make room for the new development. One part of this is a medical office building of around 10,000 square feet. There are also two multi-family residential buildings located at 2330 and 2334-2336 Webster Street. The multifamily buildings have a total of four units, which have been vacant since 2004.

The property presently features surface parking of approximately 6,500 square feet. The new project would eliminate this feature and not provide any on-site parking once completed.

Another thing that the new development would eliminate is open space. As proposed, the project would require 34,800 square feet of private open space, according to zoning requirements. However, the proposal from Riaz Capital includes an open space of only 5,025 square feet. The development would be eligible for an open space reduction through a use permit by the City of Berkley Municipal Code 23.204.050.D.3, according to the filed documents. This regulation allows a smaller open space allocation in place of ground-floor retail and by providing additional residential units in close proximity to public transportation routes along Telegraph Avenue.