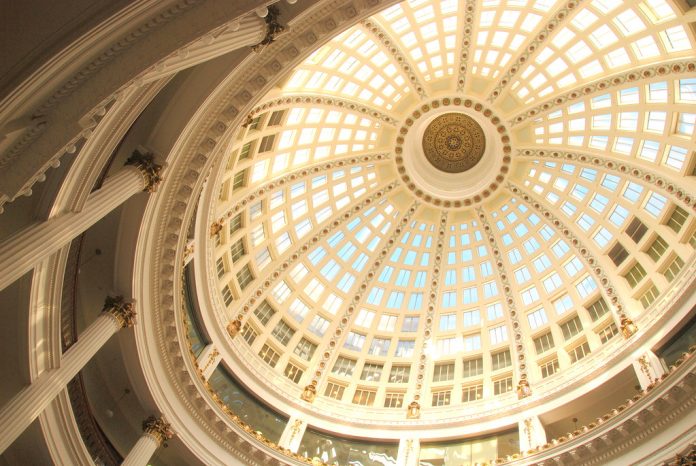 (EDITOR’S NOTE: According to public records, the 340,000-square-foot property located at 300 Frank H. Ogawa Plaza in Oakland sold for $72 million, or just around $211 per square foot. The seller was an entity associated California Capital & Investment Group, led by Phil Tagami. The sales details were first reported by the San Jose Mercury News. The San Francisco office of CBRE helped broker the deal. The people who worked on the transaction included Kyle Kovac and Mike Taquino, both executive vice presidents with the firm.)

OAKLAND/SAN FRANCISCO (Jan. 24, 2022) – Rubicon Point Partners (“Rubicon”), a woman and minority-owned real estate company specializing in transformative investments, announced its recent acquisition of the iconic Rotunda Building in downtown Oakland from Rotunda Partners II, who have owned the building since 1999 and will continue as a minority owner. Featuring some of the Bay Area’s best examples of Beaux-Arts architecture, the building also features a four-story parking garage.

Rubicon plans to roll out its “Work From Here” program and put in place a sustainability plan to reduce the building’s carbon footprint.

The “Work From Here” program focuses on creating workspaces that are amenitized in ways not available at home, emphasizing employee health and wellness while enabling employers to better accommodate a hybrid workforce. Rubicon plans to introduce a state-of-the-art fitness facility, upgraded common areas, hybrid digital conferencing and collaboration infrastructure.

“We are honored and humbled to be the caretakers of the historic and beautiful Rotunda. We look forward to implementing an improvement plan that will honor its history but also modernize it to allow for a new generation of companies to thrive,” said Ani Vartanian, Rubicon’s co-managing partner. “We are especially excited to work with key stakeholders to activate Frank Ogawa Plaza and integrate it with the building’s indoor space. This indoor-outdoor environment is rare in urban settings like downtown Oakland.”

Situated at Frank Ogawa Plaza across from City Hall in Downtown Oakland, the property was built in 1912 and originally designed by Bay Area architect Charles Dickey, who fitted a dramatic elliptical glass dome in the interior atrium. At the time, the dome was said to be the largest of its kind. He was also known for developing a diverse architectural style, fusing elements of Hawaiian and Beaux-Arts design. Dickey’s most recognizable California creations, the Oakland Rotunda Building and Claremont Hotel, proudly sit on the National Register of Historic Places.

In the early 2000s, prior ownership of the Rotunda reinforced its structure with a full seismic retrofit following the 1989 Loma Prieta Earthquake, transforming it into one of the safest historic spaces in Downtown Oakland. “We selected Rubicon because of their track record in transforming historic assets and are confident that they will be great custodians of this Oakland jewel,” said Phil Tagami, one of the managing partners at Rotunda Partners II.

Rubicon purchased the eight-story property through the Rubicon First Ascent Fund, seeing an opportunity to simultaneously preserve an Oakland treasure while reducing its environmental impact. The firm has been busily transforming similar historic spaces from California to Washington for the past decade such as 450 Shotwell, the Storek building, 1125 Mission Street and Masin Block.

Rubicon plans to continue offering the building to be used as an event space for galas and events that benefit the City and are essential to the success of the people of Oakland.

“Being good environmental stewards is important to us at Rubicon. In addition to modernizing the Rotunda, we plan to reduce the building’s carbon footprint in the process. We hope the Rotunda Building will serve as a blueprint for how historic spaces can remain sustainable for future generations,” said Razmig Boladian, Rubicon’s co-managing partner. “Our playbook at the Rotunda Building involves investments in the building systems and the deployment of our technology stack, including machine learning utility management systems. All of these serve to increase efficiency while reducing the building’s carbon footprint.”