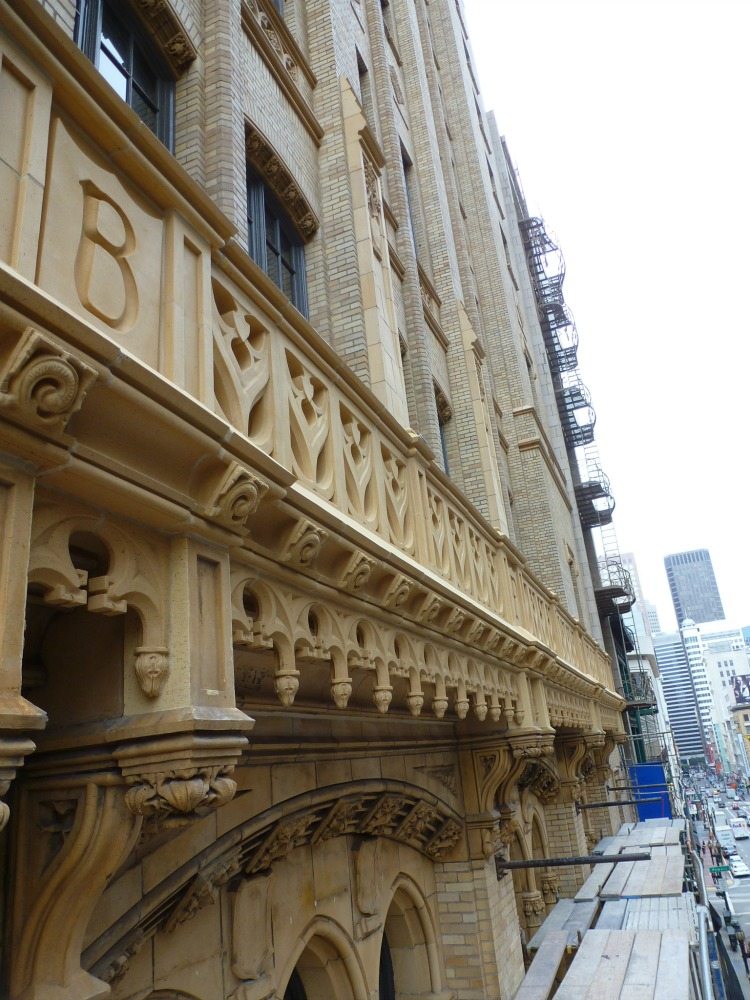 SAN FRANCISCO-The new leader of the San Francisco Elks Lodge is on a mission of revival for his quiet philanthropic organization using as a springboard a long-awaited renovation to the façade of his club’s historic Union Square building.

[contextly_sidebar id=”26961befddbdb07a136fa3e0383a17c0″]Nasir Shakour, a 40-something Midwesterner of Syrian and African-American heritage, hopes to use a bit of his lodge’s architectural history to renew a symbolic greeting to the city. On June 23, the lodge, with 889 members, celebrated the unveiling of a reconstructed third-story balcony and terra-cotta balustrade at its 450 Post St. address.

The $450,000 restoration renews glamour and beauty to the 15-story, Spanish Gothic-style building. The balcony extends to the outdoors the Grand Ballroom and more intimate Lodge Room with its massive wooden bar. Outside, it grants views of Union Square and city life up and down Post Street.

The reformed balustrade also brands the club to passersby in a way conceived by the building’s designers but for an unknown reason never incorporated into the original structure. Four terra-cotta shields integrated into the balustrade now bear the initials B, P, O and E to signify the “Benevolent and Protective Order of Elks.” While the shields were built with the original balcony, they were never emblazoned with letters, despite the architectural drawings stipulating that it be so.

“The building now has a very clear identity, and everyone who walks by will know it is an Elks lodge,” said David Wessel of San Francisco’s Architectural Resources Group. Wessel led the Elks’ project through the city’s oversight process; ARG also performed as the project’s general contractor.

Founded in the 1870s, San Francisco’s is the nation’s oldest, continually active Elks lodge. Commissioned by the Elks club and completed in 1925, the steel-frame building is eligible for individual listing on the National and California historic registers and is considered an integral part of downtown’s Kearny-Market-Mason-Sutter Conservation District, according to city records. At one time, it served as housing for the lodge’s single, unmarried male members.

The conservation of its intricate and florid balustrade—the vertical face of the balcony—stitches another bit of original ornamentation onto the city’s urban fabric. It also integrates the building more seamlessly into a line of historic buildings constructed near the same time on this section of Post, Wessel said. The terra cotta, or baked clay, pieces to replace the cracked or missing ones on the balustrade are from clay mined in Sacramento. While it’s not clear if this is the original source, the colors match well.

The Kensington Park Hotel, Farallon restaurant, Light Opera Gallery and Post Street Theatre have been the building’s most public face. But all are tenants of the Elks.

Inside, with a warren of uses, the building has the familiar feel of an older structure. The Elks occupy the third story with soaring, dark-wood coffered ceilings throughout. They also have basement-level pool table rooms and a gymnasium with a modest exercise room, four-lane indoor exercise pool, sauna, and locker rooms. The Elks and the hotel share two handball courts.

Shakour has been a member of the San Francisco Elks Lodge for a decade. He originally joined after a friend suggested he might like the pool. Existing members must sponsor someone who wants to join the club, and there is also an initiation ceremony. Members elected Shakour the lodge’s “exalted ruler,” its the top leadership post, and he began serving April 1. The position is voluntary though “it feels like a full job,” he said. In his daily life, Shakour is a beta-product manager for Milpitas internet-security startup FireEye Inc.