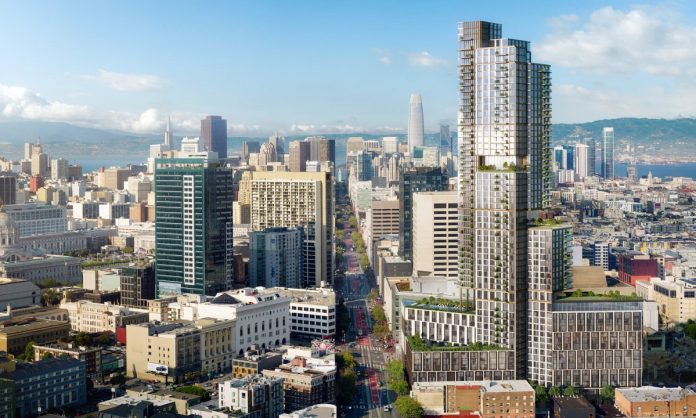 A plan to bring hundreds of apartments to San Francisco’s Hayes Valley neighborhood that was originally approved in 2020 just won permission to get even bigger. The San Francisco Planning Commission unanimously approved on Jan. 19 a modified design for the residential tower slated to be built at 10 South Van Ness Ave., which would increase the proposed number of units from 966 to 1,112.

“The project is substantially the same,” said Jim Abrams, attorney for the project sponsor. “There’s a five percent increase in the unit count [and] there are some changes to the massing and the design of the tower.”

The developer is Crescent Heights with the design being done by Kohn Pedersen Fox Associates. The modified project totals approximately 939,570 square feet, which includes 18,947 square feet of retail and service space. The 1,012 dwelling units comprises 374 studios, 501 one-bedroom and 137 two-bedroom units. Other differences include additional parking stalls, increased residential space by about 12,000 square feet and a decrease of retail space by about 10,000 square feet.

Originally, the project was approved in June 2020 with plans for 21 three-bedroom apartments, which were eliminated completely in the new project proposal. Eliminating all of the three-bedroom apartments in the modified plan was one of the main topics of discussion for the planning commission. Members of the board weren’t pleased with the loss in spite of overall supporting the project changes.

Commissioner Kathrin Moore asked why the project proposal includes the reduction of three-bedroom units to zero. Abrams pointed out that in the area where the tower is proposed, two- and three-bedroom units aren’t being rented as much as the studio and one-bedrooms.

“The abandonment of larger family units is a concern,” Moore said. “Partially so because we had all set a common goal in all buildings to support a mix of large family-oriented units and the smaller ones, which is the one-bedroom and studios. We are pretty much abandoning the three-bedroom units.”

However, Moore also noted that she was on the board in 2020 when the project was initially approved, and she pointed out that the new proposal is for the most part not substantially different from the previous proposal. She and other commissioners also noted their general approval of the project despite their disappointment related to the mix of residential units.

“The project sponsor is endeavoring to construct this project and build this project but it needs this extension to close a loan that’s expected to close in February,” Abrams said.

The commissioners overall didn’t have an issue with the extension request in this specific case, but several highlighted their concerns over the possibility of the project ultimately not getting completed. Commissioner Theresa Imperial was one of several to voice her desire to see this project built instead of falling by the wayside.