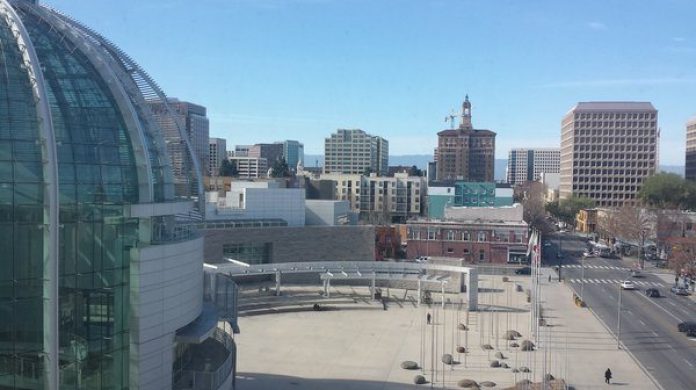 San Jose planning officials have decided to delay City Council consideration of a 25-story downtown mixed-use tower to give extra environmental review to the project.

[contextly_sidebar id=”isLgGaSuhlPXjVCKsFeVc6XyO9IBRSeW”]It’s the third attempt to build a high-rise by The Core Companies, a San Jose-based developer of affordable and market-rate residential and mixed-use projects, according to Chris Neale, the company’s executive vice president. Unsuccessful attempts to do so occurred in the early 1990s and 2007, Neale said. He said this project is the first in San Jose to incorporate older brick structures into a new development. Neale wouldn’t comment on cost estimates of construction.

The buildings—the Red Front Surplus building at 455 S. First St. and Herrold College building at 465 S. First St.—were both built in the early 20th century and have been designated a Structure of Merit and City Landmark, respectively. The latter site was home to an engineering school founded by Charles David Herrold, credited with creating the first radio broadcast from that location in 1909.

The Core Companies has its offices located in one of the historic structures, which had to be largely rebuilt after the 1989 Loma Prieta earthquake. Only the façades of the original structures remain.

Tracy Tam, city planner and project manager, said the supplemental EIR for the project should take three to four months. Retail occupants of the ground-floor space are likely to be service-oriented businesses like barber or flower shops, as well as a possible art gallery, she said. There will also be an exhibit about the history of the old structures.

Neale said under the best of circumstances, his company hopes to get approval for the Gateway Tower project by the third quarter, start construction next spring and have it completed by April 2019.

“We’ve had a number of meetings with people in the SoFA district, so have laid much of the groundwork,” Neale said. “We want to embrace the neighborhood and incorporate it into the project. Many of the businesses there are enthusiastic about the project and can’t wait for it to be completed.”

“Gateway Tower is a great project, and we’re disappointed the city is requiring additional environmental analysis, which will delay it,” Knies said, noting it received support from Preservation Action Council of San Jose, a group advocating for protection of historical sites throughout the city. “Core has gone above and beyond to accommodate those two small buildings.”

He said since the project has gotten the stamp of approval from preservationists, it should have merited a mitigated negative declaration on its environmental impacts instead of a lengthier, more complex SEIR process.

“This will be a marquee project for the entire downtown area,” Knies said. “When approaching downtown from the south, this will be the building you notice. It’s a very urban project and well designed to incorporate the activity of the SoFA district. The Core Companies is a veteran developer here and it’s wonderful seeing them get into high-rise projects.”

In order to advance the dramatic revitalization of downtown San Jose that started in the 1980s, Knies said the commercial business district needs more of this kind of development.

“Downtown still needs more people, whether workers, visitors or residents,” he said. “It’s great to see more high-rise residential development proposals coming in this cycle, but we need to keep our foot on the gas pedal to get as many as we can.”

Neale said Gateway Towers will be a market-rate development with studios, one- and two-bedroom units with an average size of 900 square feet. He said his company, which has built affordable housing projects in the Bay Area’s largest city in the past, has none at present even in the planning stages because San Jose is lacking adequate funds to help build them.