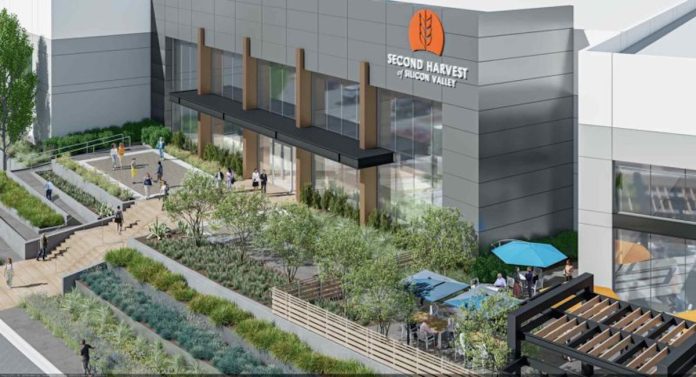 (EDITOR’S NOTE: According to public documents reviewed by The Registry, the property was acquired on May 2 for $37.2 million.)

After an extensive real estate search, Second Harvest of Silicon Valley has entered a contract with South Bay Development Co. to purchase a property in the Alviso area of North San Jose. The 10.4 acre site located at 4553 and 4653 North First Street will serve as the food bank’s new home, unifying most of its food handling operations, currently spread among three locations throughout San Jose. Plans for the new home also include an expanded volunteer center and offices for operations. The plan does not impact Second Harvest’s fourth location in San Carlos, which supports services in San Mateo County.

The COVID-19 crisis has dramatically increased the number of people who now rely on Second Harvest’s services. Since the pandemic hit, the organization has doubled the amount of food it supplies to the community, providing free groceries to nearly 500,000 people every month—twice the number it reached pre-pandemic. Given the economic devastation low-income households have experienced due to the pandemic combined with the incredibly high cost of living in Silicon Valley, the food bank is expecting a heightened level of food insecurity to continue for the foreseeable future.

To address the ongoing need in the community, Second Harvest has been working on long-term capacity planning, which includes the vision for a site in Santa Clara County that would allow the food bank to unify most of its food handling operations in the South Bay to improve its efficiency.

“While we have managed to meet the incredible need of our community through temporary operational shifts, the inefficiencies of working across three locations in San Jose are considerable and costly,” said Leslie Bacho, CEO of Second Harvest of Silicon Valley.

“Operating three warehouses in one city requires duplicative equipment, inventory and processes to manage. We have also been working with inadequate infrastructure to address the high level of need such as insufficient freezer, refrigeration and office space. Having a permanent location with increased capacity also allows us to flex when we are required to respond and support future emergencies and disasters.”

One of the largest food banks in the nation, Second Harvest works with over 300 partners in the community to distribute over 12 million pounds of nutritious groceries every month to families in Santa Clara and San Mateo counties. The majority of the food they provide is fresh produce, protein and dairy.

“For 47 years, Second Harvest has been the hub of the charitable food system in Silicon Valley and their work is vital in keeping food on our neighbor’s tables,” said San José Mayor Sam Liccardo. “During the pandemic, Second Harvest became a lifeline to thousands. We are grateful for their continued support and are excited to see their expansion in Alviso.”

Successfully executing Second Harvest’s mission relies on having strong and trustworthy ties to the community, and Alviso is one of the many neighborhoods Second Harvest has served for decades. It currently provides food to Redemption Jubilee Church, which operates a food pantry two days a week serving about 300-400 local households. Second Harvest also operates a free grocery distribution site at Our Lady Star of the Sea Parish one day a month that reaches about 150 local households.

“Second Harvest has a long-standing history of partnership and service in the communities they serve, including Alviso where they have worked with local organizations to distribute nutritious food to our residents for over three decades,” said San Jose Councilmember David Cohen. “I’m excited that the food bank is looking to become even more deeply rooted in our community by making their permanent home in Alviso.”

Food bank officials point out that while the new location will be an operational hub for distributing food to the community through its nonprofit partners across Santa Clara and San Mateo Counties, it won’t be providing food directly to individuals and families at this location. “In light of what people have seen in the media during the pandemic, we want the community to understand this is not going to be a location where our clients can come to get food or where neighbors would see long lines of cars.”

About Second Harvest of Silicon Valley

Founded in 1974, Second Harvest of Silicon Valley is one of the largest food banks in the nation and a trusted nonprofit leader in ending local hunger. The organization distributes nutritious groceries through a network of more than 300 partners at drive-thru and walk-up sites across Santa Clara and San Mateo counties. Due to the prohibitively expensive cost of living in Silicon Valley and the economic downturn caused by the COVID-19 pandemic, Second Harvest is now serving an average of 400,000 people every month, a 60% increase over pre-pandemic levels. Second Harvest also connects people to federal nutrition programs and other food resources, and advocates for anti-hunger policies on the local, state and national levels. To learn more about how Second Harvest is responding to the incredible amount of need in Silicon Valley, visit shfb.org.