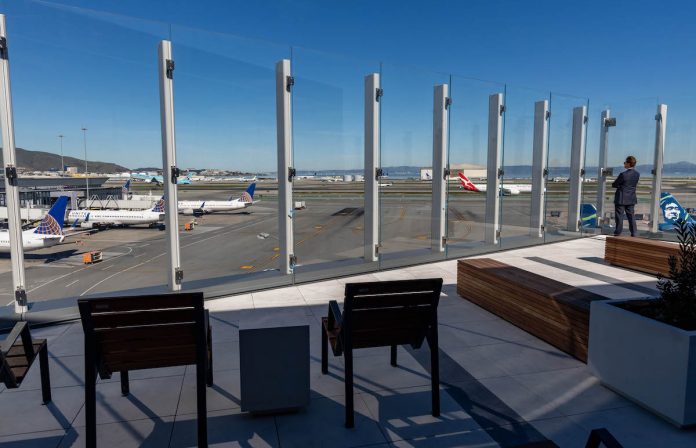 SAN FRANCISCO – The San Francisco International Airport (SFO) announced the opening of a new outdoor observation deck, the SkyTerrace, on Friday, February 14, 2020. Located pre-security in Terminal 2, the SkyTerrace is open to the general public and offers 180-degree views of the busiest section of SFO, where all four runways intersect.

“We are very excited to open an outdoor observation deck that everyone can enjoy,” said Airport Director Ivar C. Satero. “For many of us, coming to SFO with family to watch airplanes helped inspire our love for aviation. With the SkyTerrace, we hope to bring that same passion and excitement to new generations of families.”

The SkyTerrace will be open seven days a week from 7:00 am – 10:00 pm. Access is free. No ticket or boarding pass is required to access the SkyTerrace, but visitors will undergo a security check as they enter the space. Visitors may bring food and beverages to the area, but smoking is not permitted at any time. Later this year, a café will open in the vicinity of the observation deck.

The SkyTerrace includes an SFO Museum exhibit titled The 1954 San Francisco International Airport Terminal, which explores the history and architecture of the facility that previously existed in the area where the SkyTerrace is now located. Designed in the International Style, the seven-story building employed an innovative, dual-level layout that separated departures from arrivals, an approach that is now common at airports around the world. Dedicated roadways streamlined traffic to the terminal, and panoramic views of the airfield and San Francisco Bay were provided from multiple spectators’ terraces. The terminal building was dedicated on August 27, 1954, at the renamed San Francisco International Airport during a three-day open house and flight festival attended by nearly 600,000 visitors. This exhibition features a selection of objects and historic imagery from the first decade of operations at the 1954 International Terminal building. All material is from the collection of the SFO Museum.

The 1,460 square foot SkyTerrace is furnished with wooden chairs and benches situated among a creative display of drought-tolerant landscaping. Bird-safe glass panels provide wind protection, yet allow open views of the skies above.