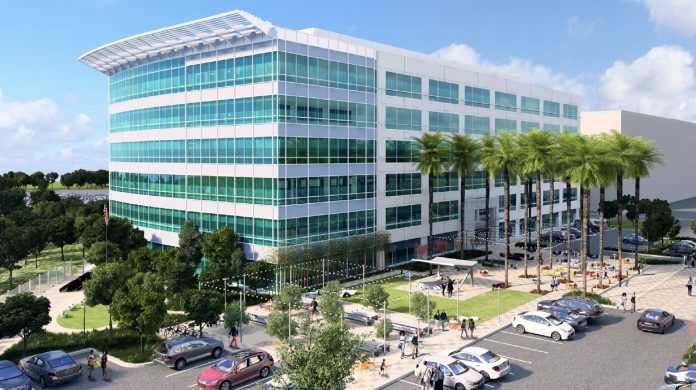 The future of the office may be unclear, but major investors are betting big on Bay Area assets. In a deal that recorded just yesterday, San Francisco-based Shorenstein has purchased two buildings and a parking lot in the America Center office complex in San Jose. Shorenstein paid $235 million for the properties according to sources familiar with the deal.

“The campus offers tenants the opportunity to expand and grow, the highest quality of construction, exceptional building ownership and management, as well as stunning panoramic views and state-of-the-art on-site features, such as View Dynamic Glass and NanaWall doors to allow for an open air lobby and Wifi throughout the campus,” states USAA’s website.

Since completion, USAA had been holding onto the asset. USAA also notes that zoning for a fifth building is approved and would allow for up to one million square feet of commercial space total. In all, the entire campus totals  about 30 acres. On-site amenities include “spa quality” onsite fitness centers, sports park, open space, and immediate access to bike and jogging trails.

JLL’s Capital Markets team advised the sellers in the deal. Shorenstein also obtained a loan of $179.3 million via Blackstone Mortgage Trust to aid in the acquisition of the asset. Shorenstein has been one of the largest investors in Bay Area assets over the years. In 2020, the company sold Santa Clara Towers for $195 million, or about $438 per square foot. The company also owns Jones Berkeley, a 170-unit residential community, 1400-1500 Seaport Boulevard, a 448,000 square foot office project in Redwood City, Calif., and more. Currently, the company has $8 billion total assets totaling 23 million square feet as part of its national portfolio.