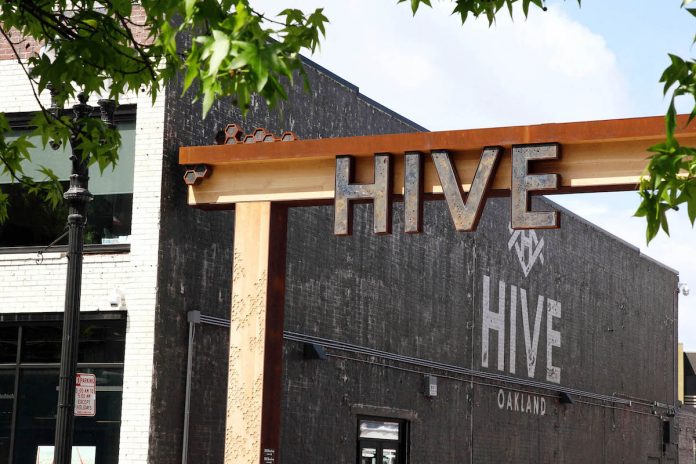 The City of Oakland has a new commercial development in the works, which earlier this year,  saw strides made. In late April, the city released the Draft Environmental Impact Report (EIR) for a two-building development, referred to as The Pigozzi Project.

The project, which will be located at 460 24th Street in Oakland’s Northgate-Waverly neighborhood just north of the city’s downtown core, is developed by locally-based Signature Development Group (SDG). Flynn Architecture is responsible for the design, and the landscape architect is The Guzzardo Partnership Inc.

The mixed-use development will add office, retail and arts spaces – almost 100,000 square feet in total – to the Uptown Oakland neighborhood across two sites. The first site (located at 444, 450 and 460 24th Street) will comprise 86,000 square feet of office and 11,980 square feet of retail. A pedestrian paseo connecting 24th and 25th Streets is also proposed, which is intended to provide space for local retail businesses and artist workspaces, the city’s EIR notes. The project will also provide 132 parking stalls and 23 bike parking stalls.

The existing site, roughly one acre, contains four garage structures of historical significance which are located within the boundary of the Garage District Area of Primary Importance (API). The development would require the demolition of one existing building addition and portions of four other existing buildings on the site.

A paseo lined with artist and craft stalls and public art would extend from 25th Street along the western edge of the project site, thereby connecting to an approximately 980 square foot dining courtyard adjacent to retail space fronting 24th Street.

At the second site of the project, the developer also proposes 580 square feet of remodeled shipping containers for artist workspaces and retail space, located at 2369 Valley Street.

The proposed two-parcel development is part of Phase II of The Hive, a mixed-use retail destination – also developed by SDG – that comprises 100,000 square feet of commercial and retail space and 104 apartments, according to the company’s website. The Hive “is a space for local businesses, social entrepreneurs and artists to converge.”

In 2014, SDG moved its headquarters to the mixed-use development and shares the block with sustainably-minded tenants like Numi Organic Tea, Impact HUB Oakland and Flynn Architecture.

The Pigozzi project is about half a mile from access to State Route 24, Interstate 580 and Interstate 80, which connects Oakland with San Francisco directly to the West across San Francisco Bay. The project is also just a few blocks from Lake Merritt, a popular social destination, as well as the Fox Theater and a nearby Whole Foods Market.

SDG’s recent proposed expansion of the Hive marks only the latest chapter for the company, which has several other assets that comprise its footprint in Oakland’s Uptown neighborhood, with 2022 having already proved to be a particularly active time.

In March 2022, SDG announced the opening of Kissel Uptown Oakland – located at 2455 Broadway, immediately adjacent to the most recent in-the-works project – which is a six-story building designed by BAR Architects. Kissel Uptown features a 168-key hotel, 74 apartment residences, meeting and conference space, indoor and outdoor bar areas, and a new locally-owned restaurant.

In Winter 2020, SDG announced the opening of Denizen, a 34-unit, four-story apartment development. Also designed by Flynn Architecture, Denizen has a unique L-shaped design meant to reflect the dynamic, intimate character of its surroundings and continue the entrepreneurial tradition of the former Hanzel Auto Body Works, according to SDG’s website.

Just north of the project site at 460 24th Street, the Pill Hill neighborhood has recently seen a residential development progress forward in the planning process. Earlier this month, the city published EIR for a proposed 220-unit multifamily project for which The Martin Group is the developer and BDE Architecture is the architect. The undertaking calls for the construction of a seven-story building with a floor area of approximately 222,823 square feet, including a ground floor parking garage.

Earlier this year, another mixed-use collaborative project – the proposal for which is put forth by California College of the Arts (CCA) – continued to take shape. Established in 1907 in Berkeley, ⁠CCA has experienced a number of location changes over the decades. In 1922, the school moved from Berkeley to the Treadwell Estate in Oakland, and in the mid-90s, it opened a second campus in San Francisco. Earlier this year, CCA closed its Oakland location and merged it with its San Francisco campus.

CCA is  currently onto the next chapter in its story and returning to its roots by proposing a reimagined campus at the Treadwell Estate at 5212 Broadway in Oakland. Through the joint efforts of San Francisco-based real estate developers Emerald Fund and Equity Community Builders, along with Seattle-based design firm Mithun, the proposed development is intended to increase affordable housing with close proximity to public transit and preserve the historic character of the site.