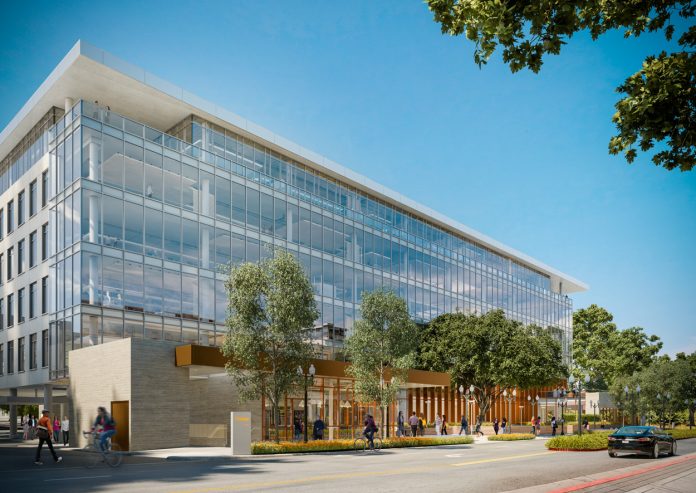 Splunk, which went public in 2012, announced the lease in a regulatory filing last week. The San Francisco-based company will lease the entire building located at 3090 Olsen Drive in San Jose, for 10 years and nine months, beginning upon completion of construction and improvements expected around September 1, 2016. Federal Realty is developing the property, which it calls 500 Santana Row.

Splunk will pay monthly net rent of $3.65 per square foot, or nearly $10.3 million for the first year, and is subject to annual increases of 3 percent. The lease includes two five-year renewal options and first options on two adjacent office buildings totaling an additional 500,000 square feet planned by Federal Realty at 700 and 900 Santana Row.

The move marks the second large urban office lease by the expanding company in a year. Last August Splunk leased a 213,000-square-foot building at 270 Brannan St. in San Francisco shortly after developer SKS Partners broke ground on the project. It is expected to move its employees from their current location in Cupertino to the Santana Row space. Splunk currently has approximately 1,400 employees, and expanded its headcount by 35 percent over the past year.

Federal Realty executives said the lease was validation of the developer’s strategy to attract high-tech tenants away from suburban campuses to a more diverse mixed-use environment. “Splunk is the exact type of tenant we were targeting,” said vice president Jan Sweetnam in an interview Friday. “It’s a validation of the location and the amenity base that it will offer their employees. They are not yet big enough to have their own campus, but at Santana Row they can really lever off our amenities.”

Those amenities include a bevy of building features including six shower rooms, outdoor recreation terraces, bike stalls, dedicated shuttles to the nearby Diridon Caltrain station in downtown San Jose and underground parking for 700 cars, all surrounded by Santana Row’s 645,000 square feet of retail space, 20 restaurants, 30,000 square-foot fitness club and the 213-room Hotel Valencia.

The Registry - February 7, 2023 0
By Kate Snyder The recent sale of a shopping center in San Jose shows the continued activity of the retail real estate market in the...