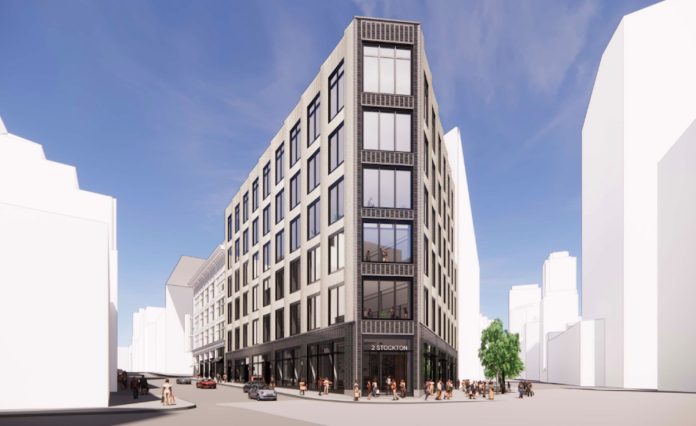 After having undergone two renovations since being built, the existing building at 2 Stockton Street in San Francisco is proposed to undergo its third renovation. The recent proposal comes from Strada Investment Group to expand the four-story retail building into a seven-story mixed-use asset.

According to the project proposal, the building will retain retail spaces at the basement, first, second and third levels. It will also expand the existing fourth level to align with the perimeter extents of the lower levels, creating a large office use floor. Along with that, the plans also seek to add two additional office floor levels to align with the lower massing and a smaller penthouse office level as a part of the seven floors.

The current building is 71,671 square feet, and the project is proposing that the total after the renovations will be 104,624 square feet. According to the proposal, the basement level will continue to be used for retail and building services and operations. The basement level will also support bicycle parking with a bicycle commuter facility that provides residents with clothing lockers and shower facilities. Additional bicycle parking is also proposed along both Stockton and Market Streets. Furthermore, there are plans for a new office entrance and lobby on Market Street, which is located on the eastern edge of the property.

Gensler is managing the design concept and construction of the project. According to the proposed plans, the smaller penthouse office level will include an outdoor terrace. The additional floor levels will be set back from the neighboring Phelan building which will allow for light to remain from the existing windows that line the lot.

Originally built in 1907, the building was used as a retail store known as Roos Bros.

However, in 1994, it was extensively remodeled to become the Virgin Megastore, a retail chain company. At this time, the building remains vacant.

“The period of significance is 1907 when the building was constructed. However, the property does not retain sufficient integrity to communicate its significance,” the proposal notes when addressing the historical evaluation. “The integrity of design, materials, and workmanship has been severely compromised after the 1937 and the 1990s remodels. The integrity of feeling and association has also been significantly diminished after the last department store vacated the building in the 1980s. Therefore, the property is not eligible for listing on the CRHR.”

While the proposal is pending approval, Strada currently has approval to convert four levels of the nearby 48 Stockton from retail to office on floors three through six. Formerly the site of a Barney’s Department Store, Strada Investment Group received approval to redevelop the building in April of last year. According to project plans, the renovation project will encompass 37,402 square feet of the total building.

Strada Investment Group is also working on many other office building projects such as Roseville Innovation Park, Waters Technology Park and Center Point Business Park. According to the company’s website, the firm targets metropolitan areas where the local economy has a concentration of industries with a growth outlook. The company also identifies specific submarkets and property types that are especially attractive to those industry users.