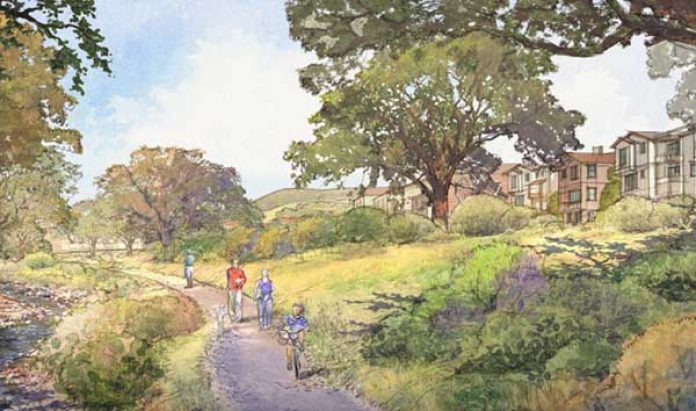 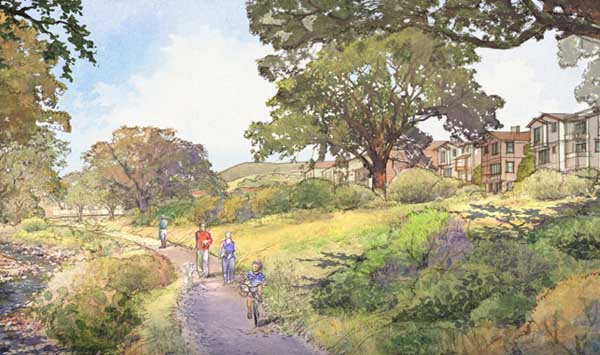 Irvine-based SunCal is reviving a mixed-use development project in Oakland that has been in limbo for the past several years.

The large-scale real estate developer has filed plans to build a 935-unit residential community at the former Oak Knoll Naval Hospital. The housing mix would break down as 134 apartments, 433 townhomes and 368 single-family dwellings.

“This is one of the most significant properties in the Bay Area,” SunCal spokesman Joe Aguirre said. “The entire Bay Area is a world-class place to live and work, and there continues to be a need for new, quality housing throughout the area. We are always seeking new opportunities in leading markets throughout the country, and the Bay Area is a very desirable market that holds much potential for well-planned growth.”

The Oak Knoll project could break ground in 2017, Aguirre said. Its total cost hasn’t been determined yet.

The latest proposal is similar to the previous one that involved New York-based financial services firm Lehman Brothers. The original effort called for 960 homes, 82,000 square feet of commercial/retail space and 50 acres of open areas, but it stalled when Lehman collapsed in 2008 at the start of the global recession.

SunCal, in partnership with Lehman, first bought the 167-acre Oak Knoll property in 2005 for about $100 million. In May 2014, the developer acquired the site from the Lehman estate for $76 million.

“We’re excited to resume our involvement with this very special site, and we look forward to again working toward making this a new community that all of Oakland can be proud of,” SunCal Executive Vice President Frank Faye said in a news release last year announcing the company’s takeover of the site from Lehman.

“It’s encouraging” that SunCal is resurrecting the project, said Darien Louie, the executive director of the Oakland-based East Bay Economic Development Alliance, a public/private partnership that supports business, capital and job growth in the region. “That is a fantastic location.” 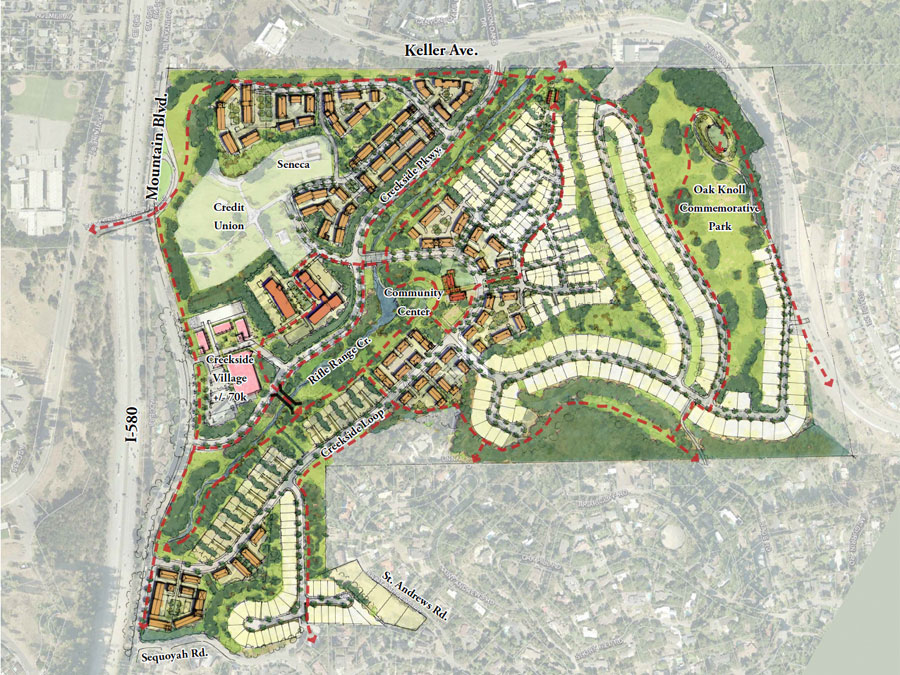 Louie noted that the site is just off Interstate 580, easily accessible and centrally located for those going to and from work in East Oakland, up north toward Richmond and down south toward Hayward. “It’s a nice commute,” she said.

The project would also help address “a high migration” of people to the East Bay—particularly Alameda County, she said. “There’s such a need for housing in the area.”

The renewed venture at Oak Knoll continues SunCal’s affinity for existing or former military sites. The company has also proposed 3,150 housing units and 777,000 square feet of office/industrial space for the inner inland area of the former Concord Naval Weapons Station. SunCal is competing against Oakland-based Catellus and Miami-based Lennar Corp. for development rights there.

In Dublin, SunCal is constructing new buildings and infrastructure for the U.S. Army Reserve’s Camp Parks training base in exchange for land to be developed into a community with at least 1,600 homes, up to 200,000 square feet of commercial/industrial space and an elementary school.

At Alameda Point, the site of a former naval air station, a SunCal proposal would have built thousands of homes, a sports complex, a ferry terminal, parks and schools, but the development fell through in 2010.

Other SunCal projects in the Bay Area are SeaCliff Estates, a community of 149 single-family residences in Richmond, and a proposed mixed-use town center in Rohnert Park.

“SunCal has been a land developer for more than 80 years, and during that time, we have worked on a wide variety of projects, including military base and defense-related site conversions,” Aguirre said. “The former defense sites we have elected to pursue offer tremendous opportunities to create new mixed-use developments that will become a valuable asset and an improvement to the general community, and they can bring public amenities such as parks, open space, trails and other features that everyone can benefit from.”