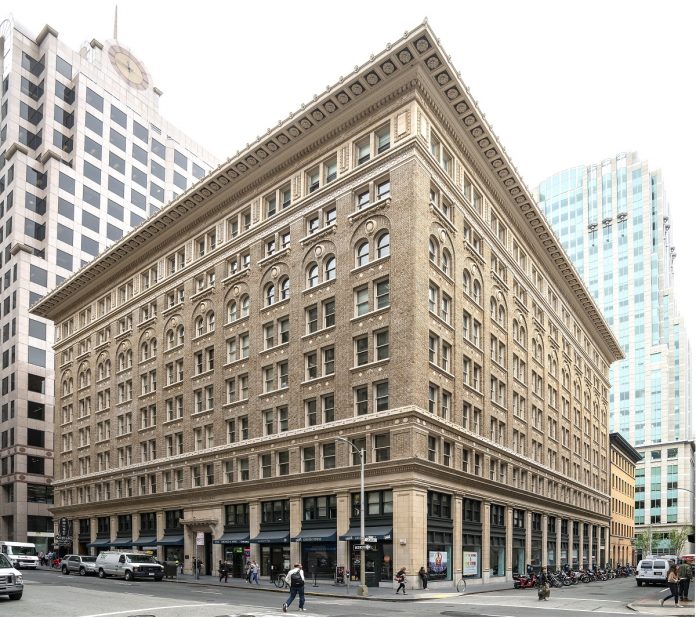 San Francisco-based Swift Real Estate Partners has acquired the 100,183 square foot 55 New Montgomery Street office building, formerly known as the Sharon Building, in San Francisco for $64.25 million, or just over $641 per square foot, according to multiple sources that track the sale of office buildings in the city.

“We are very pleased and excited to own an iconic building in San Francisco like 55 New Montgomery. Our investment represents only the third owner of a building that is over 100 years old. Our plan is to upgrade all of the systems in the building and the building interiors, as well. We believe that our investment is a good value proposition,” says Christopher Peatross, president and chief executive office of Swift.

Swift worked with the San Francisco office of CBRE on the sale and to obtain a five-year, non-recourse, full-term interest only acquisition and renovation financing in the amount of $71.5 million. Mike Walker, Brad Zampa, Megan Woodring and Taylor Shepard were part of CBRE’s San Francisco team that worked with the buyer.

CBRE also represented the seller in the transaction, a family trust. Mark Geisreiter and Jon Hunt were both involved in the sale with the previous owners. CBRE declined to comment when contacted for the sale.

The property was put on the market in September of this year. At that time, it had a total of 76 tenants and a current occupancy of 91.7 percent. There was a diverse group of companies in the building that included finance, real estate, law, non-profit and technology companies. Swift will have the option of keeping the current tenants in the building and re-leasing the property to new tenants.

“This is an exceptionally well located and historically significant building in the heart of San Francisco,” said Mike Walker, senior vice president of CBRE in a statement. “With Swift Real Estate Partners as the sponsor, it was a highly competitive financing process. We received multiple proposals from life companies, banks and debt funds. Ultimately, we structured a custom-tailored financing solution that will allow Swift the flexibility to realize the highest and best use of the building.”

The Sharon Building is located between Market and Mission Streets, directly across the street from the iconic Palace hotel, half a block from BART and two blocks from the new Salesforce Tower.

The Sharon Building is a 100,183-square foot office building in the heart of San Francisco’s South Financial District on the corner of New Montgomery and Jessie Streets. San Francisco’s South Financial District continues to show strong market fundamentals, due to strong tenant demand as evidenced by significant pre-leasing in development and steady increases in rents, up 3.4 percent year-to-date, a new historical high, according to a document from CBRE. San Francisco currently has the lowest CBD office vacancy rate in the nation at 4.7 percent.