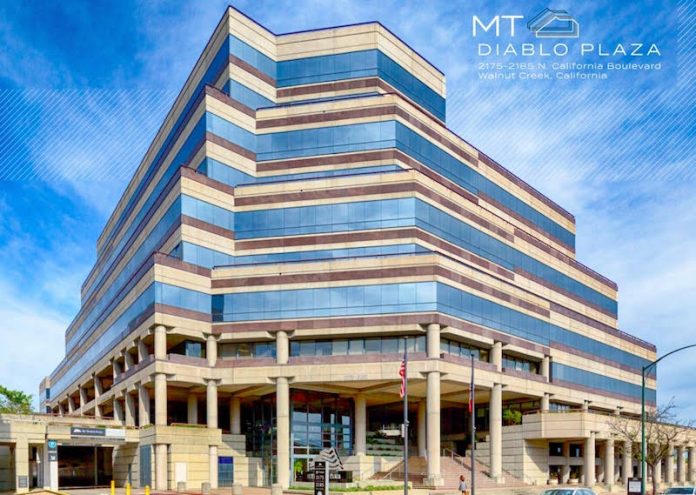 San Francisco-based Swift Real Estate Partners has acquired the 325,000 square foot Mount Diablo Plaza office building in Walnut Creek for $117 million or $360 per square foot, according to sources familiar with the sale of the property.

This property will be placed into the Swift Real Estate Fund II. While this will represent the first time that the real estate investor has acquired an office building in Walnut Creek, Swift owns and manages nearly 3 million square feet of office and flex space in the East Bay. “We feel good about the overall office market and were attracted to the urban-suburban nature of the location. The region has a very strong employment base and is expanding rapidly with new apartment developments featuring ground floor retail. The property is on BART and a brief walk to downtown Walnut Creek, which makes it attractive for current and future tenants,” says David Copeland, an asset manager with Swift who worked on the transaction.

There will be a chance for the new owner to add some value to the property going forward. The property is currently around 89 percent leased. A good portion of the tenants in the property will be coming up for renewal with the next couple of years and in-place rents are below market.

Mount Diablo Plaza is located at 2175 and 2185 North California Blvd. The two-building complex was developed in 1984. The seller of the property was New York City-based Deutsche Bank. They had acquired the property in April of 2005 for $91 million, as stated in public records. The seller was represented in the transaction by the San Francisco office of Newmark Knight Frank. The listing agent on the sale was Steve Golubchik, a vice chairman of the company.

Swift is planning to invest additional capital beyond the purchase price to make additional improvements to the property. This will include upgrades to the electrical and mechanical systems in the property to allow it to run more efficiently. The new owner will also renovate the plaza portion of the property to activate a large outdoor area and create an amenity for the tenants.