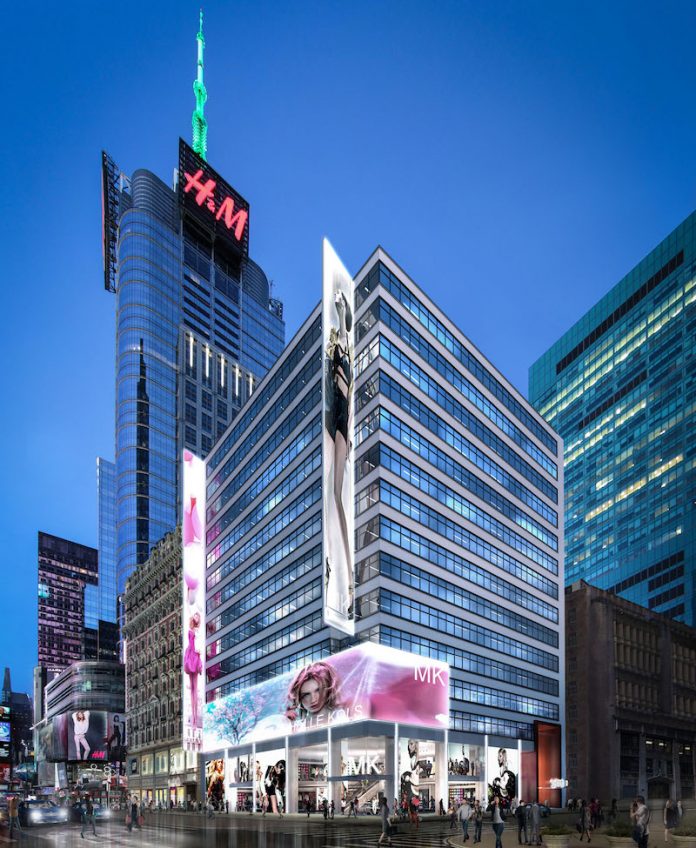 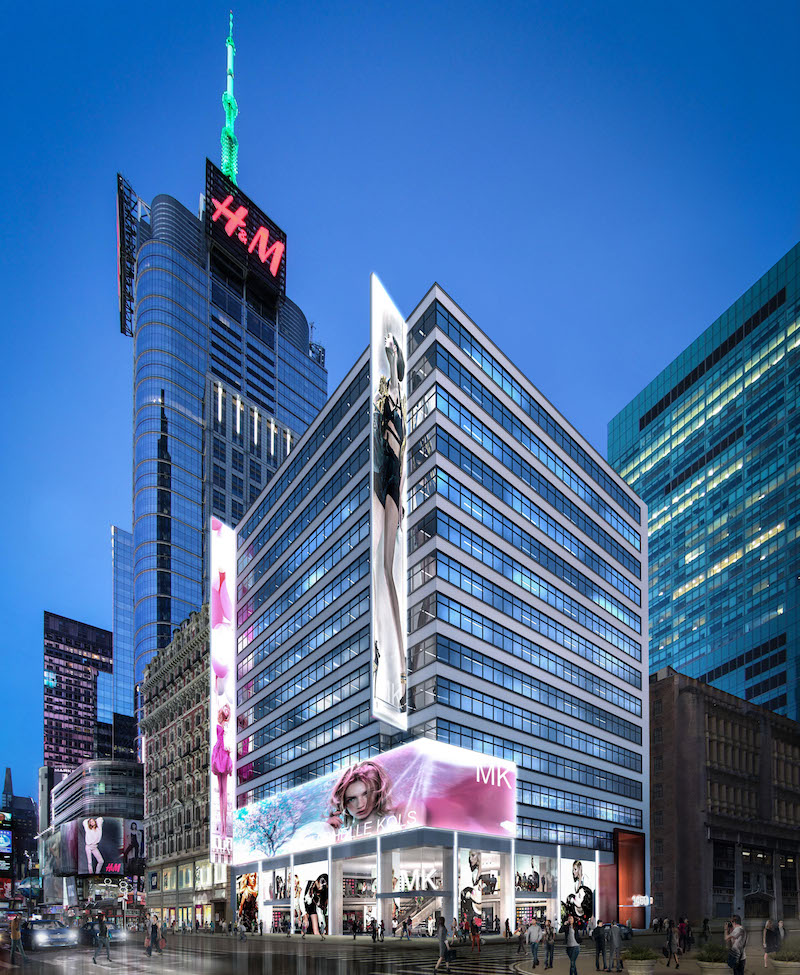 New York, NY (October 25, 2016) – The Swig Company and Himmel + Meringoff, joint owners of 8 Times Square, today announced the successful closing of a $200 million refinancing for the property. 8 Times Square is a 16-story mixed-use office and retail building previously known as 1460 Broadway. The 10-year, fixed-rate loan was provided by Citigroup.

“The successful refinance of 8 Times Square caps an eventful and fulfilling 18 months in which Himmel + Meringoff and The Swig Company have worked together to execute a plan to renovate, re-tenant, rebrand and reposition the building for the next 20 years in this market,” said Ken Perry, CEO of The Swig Company. “I want to thank our partners and the entire team for their dedication, professionalism and continued engagement on this project,” he added.

8 Times Square sits at the intersection of 41st Street and Broadway. The building is 100 percent leased. The office portion is fully occupied by co-working giant WeWork, which signed a long-term lease in March 2015. Sports apparel retailer Foot Locker leases the three–story retail portion of the building, which is scheduled to open as the chain’s Times Square megastore in time for the 2016 holiday season. The Foot Locker lease was named the Most Significant Retail Deal of the Year in 2015 by the Real Estate Board of New York (REBNY).

“From the outset our partnership has shared a strategic vision for how to reposition this building, taking advantage of imminent large block vacancy and creating a new and exciting look and feel for 8 Times Square,” said Stephen J. Meringoff, Co-Managing Partner, Himmel + Meringoff. “Today, as home to one of WeWork’s largest locations in New York City — and the site of Foot Locker’s upcoming midtown mega-center too – 8 Times Square is the fresh new face on Broadway, reborn as the physical confluence of Herald Square and Times Square whose borders we have effectively redrawn with our artful renovations, rebranding and re-tenanting strategy.”

The transformation of the 215,000 square foot building was made possible when Skadden Arps, the tenant who previously occupied 100 percent of the building’s office space, vacated the premises on March 31st 2015. On that very day, WeWork signed a 19-year lease for all but the second and third floors. The final touches of the expansive renovation, which has included LED signage, a remodeled, luxurious lobby and common areas, new elevator cabs, all new building systems and 24-hour security, will be completed in December 2016.

“We are very pleased with the advantageous refinancing for 8 Times Square which provides us with financial flexibility at very attractive terms,” commented Leslie Wohlman Himmel, Co-Managing Partner, Himmel + Meringoff. “Along with the property’s new, heightened allure for business and retail tenants, the strength of response we’ve received from the lending community is welcome acknowledgement of the success of our partnership’s strategy.”

The Swig Company was one of the original developers of 1460 Broadway when the property was built in 1951 and has maintained a majority ownership position ever since. The company formed a partnership with Himmel + Meringoff in August 2014 to acquire the interest of Swig Company’s prior partner. Himmel + Meringoff became operating partner and oversaw the renovation and leasing campaign. As part of that campaign, the building was officially rebranded as ‘8 Times Square’.

About The Swig Company
The Swig Company, LLC is a privately-owned, San Francisco-based real estate operator with an 80 year history of investment, development, partnership and management of commercial real estate properties in major US markets. Founded by Benjamin H. Swig in 1936, The Swig Company is guided by a long-term investment perspective that has proven adept at stewarding investors safely through multiple market cycles. The company’s vertically-integrated operational platform, which includes investment, asset and property management, and leasing expertise, uses flexibility, generational thinking and sensitivity to sustainable practices to stay at the forefront of emerging trends in the commercial real estate industry. For more information, visit: www.swigco.com.

About Himmel + Meringoff
New York City-based Himmel + Meringoff Properties (www.hmprop.com) operate one of the largest privately owned portfolios in Manhattan. The company’s long-term investment strategy is based on successfully identifying and evaluating well-located but under-performing properties, and structuring complex transactions that are often highly customized to meet the disposition objectives of the property’s owners. H + M’s approach to acquisitions includes joint ventures, net leases with options to buy and partial sale-leasebacks. The company has a 35-year track record of financial success in creating value through repositioning, renovating, re-tenanting and adaptive reuse using strategic capital infusion and vertically integrated in-house management.