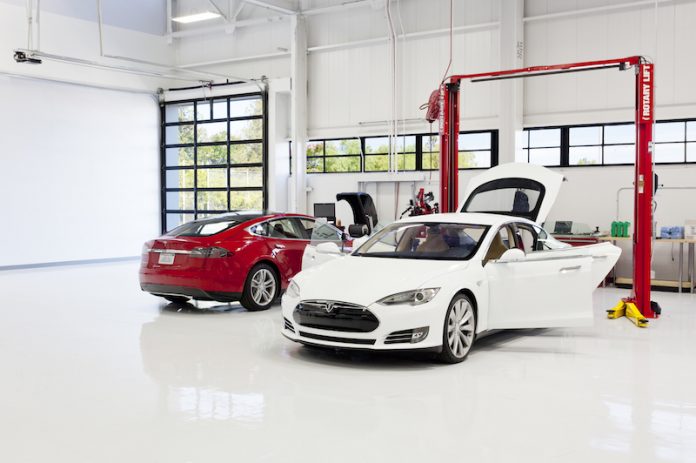 An application has been filed with the City of Redwood City on behalf of Tesla to build a sales and service center at 515 Veterans Blvd. The electric car maker is planning to redevelop the nearly 23,000 square foot property located on the corner of the Veterans Blvd. and Whipple Ave. to house a sales office, a warehouse and a service center/repair garage. The property also has an adjacent parking lot, which will remain.

The building today is home to Crunch Redwood City, which occupies nearly 18,000 square feet of the property, and Chef Peking, a Chinese restaurant. The owner of the property is a private family office, and it is represented in this transaction by Brett Weber of Colliers International. Colliers had not returned a call prior to the publishing of this story. The architect working with Tesla is Alameda-based MBH Architects.

At the moment, the project is in very early stages of development. The city has just recently received the project plans and is in the process of reviewing the project for CEQA determination. When contacted, the city planner in charge of the project was unable to provide additional detail on the application.

Tesla has recently launched its most affordable vehicle, the Tesla 3, which it started delivering to customers in July of 2017. As it ramps up production of vehicles, the service and sales centers will likely follow suit. Tesla CEO, Elon Musk, has also recently announced expansion plans for its charging station network, commonly known as the Tesla Supercharger network. While there are no indications in the early plans of a Supercharger station for this location, however the drawing of the project and parking lot has 110 car ports.

The project does provide a description of the building’s intent and use, and it states, “Tesla Motors, Inc. operates an electric automobile repair/service + sales center. Servicing an electric automobile is different from servicing a gas-powered car. Tesla’s vehicles have no internal combustion engine. This vehicle is exclusively electric and is not hybrid. Accordingly, there is no exhaust system, no fuel tanks, no liquid fuel usage, no new or used motor oil, no noise from the vehicle, and not emissions like hydrocarbon and carbon monoxide that are emitted from an automobile powered by an internal combustion engine. Instead of an engine, an electric motor powers Tesla’s vehicles. Electric motors require little to no maintenance.”