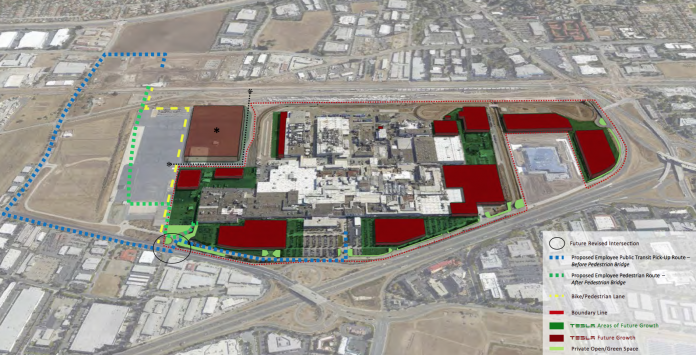 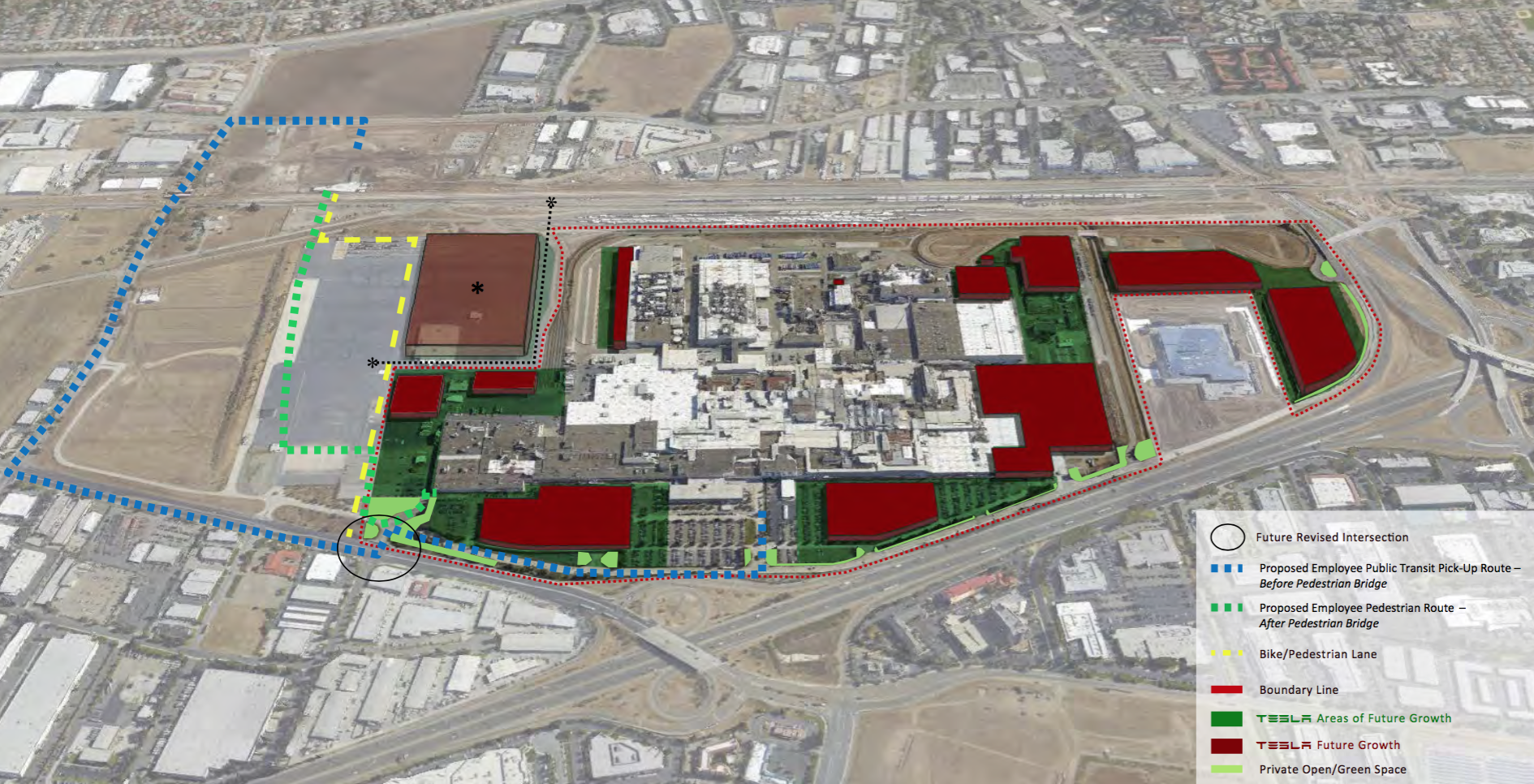 On October 13, the Fremont Planning Commission will review Tesla’s Master Plan for a potential factory expansion at 45500 Fremont Boulevard. The planning staff report recommends approval of the Plan, and that it be exempt from further environmental review as it aligns with development specifications outlined in the Warm Springs-South Fremont Community Plan Area, which already has a completed environmental impact report. Following a decision by the Planning Commission, the Master Plan will go before the City Council as well, though a date has not been scheduled.

Conversations between Tesla and Fremont officials have been ongoing and the Master Plan was created at the City’s urging to ensure that the company’s development vision and goals are in line with Warm Springs-South Fremont Community Plan. The factory also falls within the General Plan’s Innovation Center, an 850-acre planned development district bordered by Mission Boulevard, Auto Mall Parkway, Interstates 880 and 680.

[contextly_sidebar id=”7xcPjZyhldZBC2neswRPwVAAVny8JzAQ”]“A Master Plan is required for any land use greater than 5 acres in the Warm Springs-South Fremont Community Plan Area,” explained Joel Pullen, Fremont senior planner. “So as we know, Tesla is much larger than that — a couple hundred plus acres — so this is sort of planning out the macro-level expectations for future growth on this site. They would go through a planning process for any individual buildings they want to develop. These would be reviewed by the City for compliance and zoning.”

Tesla’s approximately 250-acre factory site recently increased by 25 acres following a purchase of a nearby parcel from Lennar. Under current zoning the land can only be used for commercial development. Although the additional acreage will grant the company more room to grow in the future, the current master planned expansion framework focuses on the core factory land.

“We’re very pleased to see the way that it’s evolving,” said Kelly Kline, Fremont economic development director. “The Master Plan does a great job of showing how they can grow but also shows how they can provide connectivity for pedestrians and cyclists and create links to BART. The Plan provides a mechanism to be more proactive knowing that Tesla has a number of long-term goals. It helps contemplate the full palate of what they might be planning.”

The City’s Warm Springs development planning process had originally identified the area in and around the factory for commercial purposes, with a focus on transit-accessible employment growth. As the Tesla property is predominantly used for advanced manufacturing, the goal is for areas closest to the factory to mirror the use, whereas other areas in the greater Innovation Center may shift towards office and R&D.

Tesla’s long-term goals include building about 4.6 million square feet of auto manufacturing space broken down throughout about 12 structures on the property, potentially more than doubling the existing space. The increased development is part of the company’s plan to proliferate electric vehicles worldwide and comes in light of moves to begin production of mass-market electric vehicles such as the Model 3, in addition to existing luxury lines. The Master Plan exemplifies Tesla’s commitment to California but the build-out timeline has not yet been specified and will likely be many years in the making. Company sources indicate that the factory expansion is unrelated to 3500 Deer Creek Road in Palo Alto, where the company has its headquarters.

With the new Warm Springs BART Station getting ready to open this year, providing connections to the Station for Tesla’s more than 6,000 factory employees is a key aspect of the Plan. The proposed expansion provides a framework for an additional 3,100 employees and a corresponding increase in transportation modes including a public transportation shuttle route, pedestrian infrastructure and bicycle pathways.

“We are pleased to work with the City of Fremont on a plan that reaffirms our commitment to California and to eventually maximize the potential of our Fremont factory site,” stated a Tesla spokesperson. “California continues to be the epicenter of Tesla’s manufacturing capabilities and we are proud to be the State’s largest manufacturing employer.”