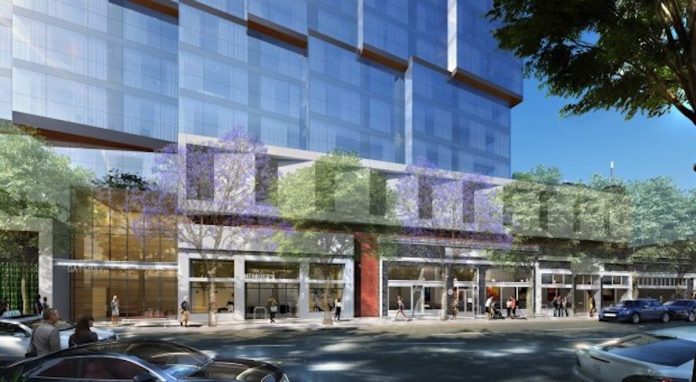 (EDITOR’S NOTE: According to the Mercury News, The Core Companies acquired three parcels of land for $18.2 million for the development of the project. The acquisition was fully financed through a loan from Santa Clara County.)

San Jose, CA – Today, the Core Companies announced it has acquired the land located at 470 South Market Street in San Jose to begin development on the 300 unit Gateway Towers project. Gateway Towers will be the first of its kind in the South Bay: a 100% affordable tower providing critically needed homes targeting a broad spectrum of income levels.

earning 30% to 120% Area Median Income (AMI). Through the 2016 Measure A Affordable Housing Bond, the project will receive a $64 million loan from Santa Clara County to assist in constructing the 300 rent-restricted units.

Gateway Towers is centrally located in the SoFa district with schools, services, and public transit nearby. The project will feature several amenities including a gym, community room, garden, and on-site resident services.

Following the acquisition of the site, Core Companies will work to secure necessary permits and the remainder of the financing through tax credits and bonds through the State of California.

About The Core Companies

Established in 1989, The Core Companies is a vertically-integrated real estate development and construction firm. Core’s mission is to create vibrant new home communities at all levels of affordability in transit-, job- and recreation-friendly locations throughout the San Francisco Bay Area, with a focus on enhancing the quality of life for our residents and continuing to play a positive role in the fabric of the neighborhoods we create. In addition to developing and constructing its own projects, Core also offers third-party pre-development, development management and construction services.

About the County of Santa Clara, California

The County of Santa Clara government serves a diverse, multi-cultural population of 1.9 million residents in Santa Clara County, California, making it more populous than 14 states in the U.S. The County provides essential services to its residents, including public health protection, environmental stewardship, medical services through the County of Santa Clara Health System, child and adult protection services, homelessness prevention and solutions, roads, park services, libraries, emergency response to disasters, protection of minority communities and those under threat, access to a fair criminal justice system, and many other public benefits.