[dropcap]I[/dropcap]n January of 2017, The Registry in partnership with Wendel Rosen Black & Dean, LLP conducted a commercial real estate industry survey with the hopes of capturing the sentiment and mood of the industry across the Bay Area region. As strong believers that group wisdom can often be a good harbinger of things to come, we surveyed our readers through an online poll measuring their perspectives on the market drivers, the health of the industry and insight in order to gain an understanding of what the year ahead may bring to the industry and the impact it will have on the region. One hundred and eighty-three responded to the survey offering their views on a variety of market conditions and what may lie ahead for local real estate professionals. The responders represent a broad slice of the industry including brokers, bankers, developers, architects, urban planners, property owners and managers, land use lawyers and analysts. Many have worked in the Bay Area for multiple decades and have witnessed cycles and booms that have shaped the region.

While the overall feedback shows a fair amount of optimism about the coming year and the market’s performance, some of the responses, along with a number of recent industry reports that corroborated this view, offered insight into a less sanguine view of the future. Given that the current cycle is in its seventh year of expansion, some signs of a contraction may be starting to show. This, along with present political uncertainty, has led to a pause in excitement over the industry conditions. Roughly 43 percent of respondents think that market fundamentals will not continue to improve over the next 12 to 18 months compared to nearly 38 percent who anticipate some degree of improvement. Another 19 percent fell in the middle, indicating a not-so-definitive stance on what to expect in the coming year. 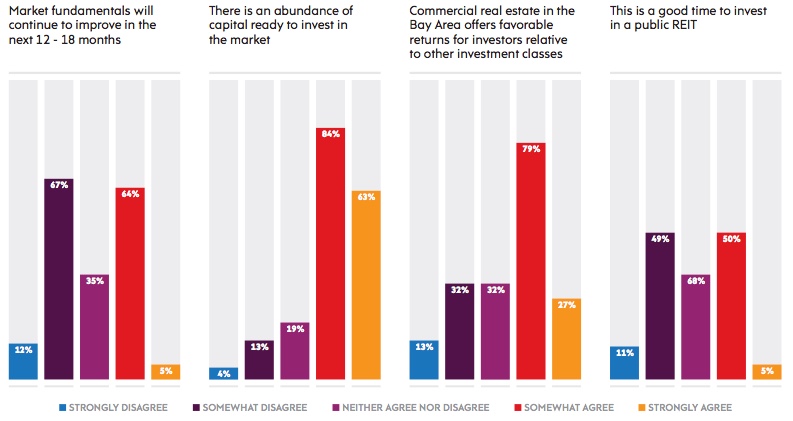 Since Bay Area remains on the nation’s short list of target investment gateway markets, maintaining its attractiveness to both foreign and domestic investors, the vast majority of those who responded are in agreement that there is an abundance of capital ready for investment in the market. This sentiment was confirmed just recently by Colliers International in its Market Report & Forecast 2016-2017, which placed Silicon Valley as one of the most attractive markets for real estate investment in 2016 despite a 34-percent decrease in capital distributed between 2015 and 2016. Although average price per square foot for Valley real estate saw a bit of a decline towards the end of 2016, investors did not seem deterred and remained confident in the strength of the local market, if the assets met their investing criteria. The Registry’s readers also have faith, with 58 percent in agreement that the region’s commercial real estate offers favorable returns for investors relative to other investment classes.

In Oakland, 2017 will prove to be an active year with a plethora of residential and some office moving towards delivery. Todd Williams, land use real estate attorney at Oakland-based Wendel Rosen, Black & Dean LLP, thinks that despite the market likely moving past its peak, investors are currently bullish on Oakland residential and that we’ll continue to see good opportunities for investment in that market. In terms of office, Williams explained that high construction costs and anticipated rents had been holding some projects back, but now that rents have moved high enough, Oakland’s desirability has gotten a boost, adding justification to move forward with projects waiting in the pipeline, which in turn will help to further stimulate job growth, act as a catalyst for retail and increase public safety.

“The past couple of years Oakland has had an entitlement boom but not necessarily a construction boom,” said Williams. “In 2017 that will start to change as several projects break ground. This will give the capital market confidence that investing in Oakland is a sound strategy.”

For promising investment opportunities in the coming months, apartment and mixed-use properties are high on people’s radar, accounting for the bulk of responses, with 47 percent advocating to hold apartment assets, while acquisitions and holds are encouraged for mixed-use properties. Investor sentiments lean a bit more in favor of industrial product than office due to the increasing demand for e-commerce and the of supply of industrial facilities that cannot meet demand; most responders felt that acquiring industrial and disposition of office may be the way to go at this point in time.

While e-commerce has been a definite driver of industrial in many parts of the East Bay, especially along the Interstate 880 corridor, Oakland’s industrial sector has been invigorated by interest in cannabis enterprises seeking to locate in the city.

“With Prop 64 passing in California, legalizing recreational cannabis use, Oakland is attempting to put an encouraging framework in place by making industrial centers open to cannabis operations,” Williams offered. “Cannabis businesses created a bit of a rush to snap up properties.”

Still, a majority of those participating in the survey don’t expect to see substantial changes in overall commercial real estate investment for the Bay Area over the next 12 to 18 months. While it’s inconclusive if they see investment activity increasing, decreasing or remaining the same, most agree that the activity will not oscillate too far, predicting a 5 to 10 percent band of up or down movement in either direction. That speaks to the stability to the market overall. 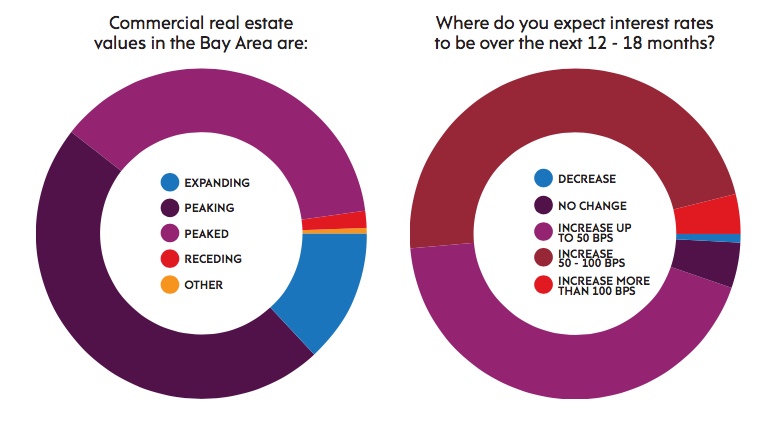 Based on the data, respondents generally seem to feel that the market is stable with limited volatility coming in the future. With interest rates on the rise and property values holding steady, those surveyed were confident in betting on an increase in cap rates over the next year and a half, with some variation based on product type.

In keeping with San Francisco’s status as a gateway market, 68 percent of surveyed readers placed foreign direct investment as one of the primary drivers of commercial real estate investment. Fifty-three percent see domestic direct investment and 50 percent local and foreign joint ventures driving the investment decisions. JLL’s Investment Outlook report cites German and Asian capital as leading office acquisitions nationwide, making it safe to assume that they will be keenly interested in the Bay Area, as well.

Interest rate hikes are strongly anticipated for the coming year. 97 percent of the responders see them increasing in 2017, with nearly 90 percent estimating that growth up to 100 basis points. In addition to raising cap rates, increased interest rates also portend an increase in inflationary pressure as well as a tightening of monetary policy on the part of the Fed.

Job growth, another key economic indicator of the region’s health, is expected to continue steady growth in 2017, though more modestly. For the Bay Area this could mean sharing some employment wealth with other burgeoning regional tech sectors, such as Seattle, Austin, Denver and Phoenix. Thirty-nine-percent of those surveyed think job growth will be on par with 2016 and another 38 percent anticipate a slight increase over last year.

Survey participants expressed most concern about increasing interest rates, construction costs, the state of the national economy, local aversion to development and an unpredictable black swan event. While some respondents were notably pessimistic about what’s ahead, possibly prompted by national instability and uncertainty coming from the White House, many reported continued excitement about the region’s strong fundamentals and promising activity such as apartment deliveries in Oakland, expansion of the biotech industry and new economic opportunities arising out of policies driven by the Washington administration.