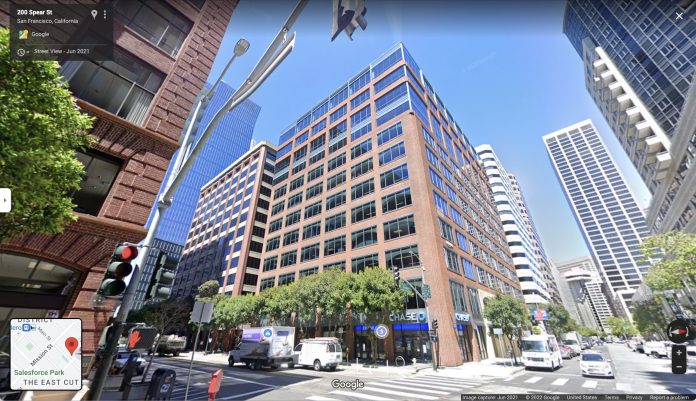 It may become more difficult to get excited about the state of commercial real estate in San Francisco when employers signal that return-to-work policies will exclude physical spaces in the future. The State Bar of California, an organization whose primary function is to license, regulate and discipline attorneys in the state, has decided to take up an exploratory initiative to sell its headquarters property in San Francisco located at 180 Howard Street. Its Board will convene later this month and engage with brokerage firm Cushman & Wakefield in exploring this option, along with possibly acquiring a new property as well as just leasing space in a building owned by a third party, according to a Board of Trustees agenda document prepared for its meeting on May 19th.

180 Howard has been in the organization’s ownership since 1995, when it purchased the nearly 200,000 square-foot building for $22.5 million, according to published reports. While it may be difficult to determine what this property may fetch in today’s market, just a conservative estimate of $600 per square foot would yield $120 million for the organization. According to some estimates, the size of the property may help, since it is not a very large asset, however its plug-and-play readiness will be another consideration for future owners, as well as what they would like to accomplish with this property.

The motivation behind the sale, according to published reports, comes from the organization’s evolving circumstances associated with the consequence of the global COVID-19 pandemic. The employees are now working in a hybrid model, which allows the workers to operate from their homes part of the time during the week. This has changed the way the space is utilized and reduced the need for offices that the agency needed prior to the pandemic. At the same time, the cost of operating the property has placed a burden on the agency along with available space in the building, which has proven difficult to lease during its ownership of the asset.

180 Howard is located in San Francisco’s SoMa neighborhood, which represents approximately 11.2 million square feet of Class A office space, out of a total of 60 million square feet in San Francisco, according to a recent, first quarter of 2022 market research report by brokerage firm Newmark. It is the only neighborhood in the city that has any commercial office construction activity at the moment. An additional 908,624 square feet is under development there, which will be added to the city’s office inventory in the near future. Total vacancy in SoMa is the second highest at 19.9 percent (the highest is in the North Waterfront/Jackson Square neighborhood, which sits at 25.4 percent). SoMa also holds the second-highest availability rate of 32.1 percent (North Waterfront/Jackson Square tops it at 34.7 percent), which is not an enviable distinction for the neighborhood.

In related SoMa news and how the changing environment of return-to-work is affecting enterprises big and small, Splunk has placed its headquarters building located at 270 Brannan Street on the market for lease. The space, which is comparable in size at 182,262 rentable square feet, is now available for lease on a direct basis. Splunk’s building is in the same submarket of San Francisco, although the building is much newer and certainly plug-and-play ready.

The State Bar of California stipulated that Cushman & Wakefield will look to gain a fee of 0.3 percent of the sale price of 180 Howard. If a new property is purchased, it will pay the brokerage firm $250,000 in a transaction where each party pays its own broker. Finally, if the agency leases another space, it will not pay Cushman & Wakefield any fee for this service, since the building owner will cover the costs associated with the tenant’s broker.