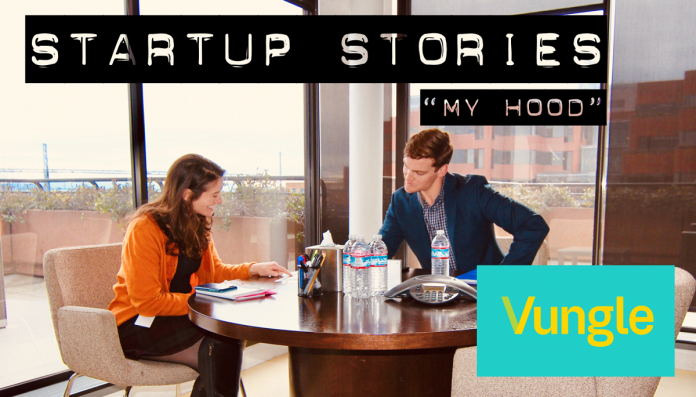 This series profiles innovative companies and The Bay Area neighborhoods they call home.

Vungle is the trusted guide for growth and engagement, transforming how people discover and experience apps. Vungle is an advertisement platform that helps publishers monetize their app through innovative in-app experiences and advertisers reach, acquire, and retain high-value users worldwide. Vungle has over 250 employees with seven global offices, including its headquarters in San Francisco, California in the North Waterfront neighborhood.

Vice President of People, Stephanie Douglass, shares her thoughts on why the company moved to the North Waterfront neighborhood and why it’s important to Vungle’s growth.

Seymour. For a little context, tell me how Vungle came to be here at Levi’s Plaza in the North Waterfront.

Douglass. We moved to our new HQ in October of 2018. Previously, our HQ was on Clara Street between 5th and 4th streets in the SOMA neighborhood. SOMA is a great neighborhood with a lot of start-ups, but after being there for several years, we outgrew the space and needed to find a new home.

We looked at a lot of neighborhoods and I mean a lot of neighborhoods! I think I’ve been through just about every building in the city. We spent about 18 months looking at different properties, and as we were about to agree to terms on a space in the Financial District, this office space became available. Our CEO, Rick and I toured the space and surrounding areas — we instantly knew this was the home for Vungle HQ. We knew that the commute would be a bit harder for some and it’s more space than we needed, but as we were admiring the views, we looked at each other and said, “We have to move here!”

We really believe that moving here will change our people’s lives. Moving into a neighborhood that is this beautiful and rich in local history is a very different experience to what we had previously. It became incredibly important to us to give this experience to our people. Our team works extremely hard and spent many years in close proximity to others, that it was time to give back to them after achieving so much success.

Moving to the North Waterfront neighborhood was a very conscious decision. There was some risk moving this far out of the Downtown/SOMA area, but we felt it was far outweighed by our people having a beautiful everyday work-life.

Seymour. With attraction and retention of talent one of the single most important factors to a company’s success in such a competitive environment as The Bay Area, how did you mitigate the risk associated with this new location?

Douglass. For those living in the City, it wasn’t a huge change. For those coming from Marin, it was a major improvement on their commute. We believed that once we highlighted how efficient getting to the office with the Levi’s shuttle that takes employees to/from BART, the East Bay employees would be fine with the change. Being further from South Bay on/off ramps and Caltrain was a change for our South Bay team, however, we felt strongly that the improvement upon work and neighborhood environment was so drastic that the benefits would far outweigh the extra commute time. While we already provide commuter benefits to all employees, we increased these to support our team because of our new location.

Seymour. Here on the table I can see you have a copy of your “new hire neighborhood intro packet.” When you were relocating your existing staff from your previous office, was there an educational component involved prior to the move?

Douglass. We made the move announcement at a company happy hour that we held at Pier 23 — A welcome to the neighborhood happy hour! Many people were not familiar with the area, so we provided a “New Neighborhood” pack that includes an introduction video, maps with places and things to do in the area, commuter information and fun facts. This is something we still provide to all new hires.

Seymour. There must be a sense of satisfaction for someone that was so heavily involved in the office selection process over so long to receive that feedback affirming you made the right choice.

Douglass. It’s huge! People are just so happy here. In our old space, we were all working towards attaining success and here, it really feels like we made it.

Seymour. If you were the mayor of Jackson Square / North Waterfront, how would you pitch the neighborhood to companies that were essentially you 12 months ago, looking at different areas of the city for that next step in the journey?

Douglass. I’d pitch this neighborhood as a place where you will have an environment of wellbeing. I’m a big believer in the power of natural light and the lack of high rises means that you are rarely in the shade of another building. You and your people are going to be happy, safe, and healthy here being surrounded by water and nature. There is access to tons of great little parks, running trails, and stairs.

Jack Seymour is a leasing associate at Transwestern’s San Francisco office, Jack’s primary role is to serve as a real estate advisor on major projects working alongside the established office leasing team of Jeff Moeller, Peter Conte and Zac Monsees. He is also responsible for developing relationships with and serving the needs of local and/or national prospective clients as well as providing diverse marketing support for leasing services.