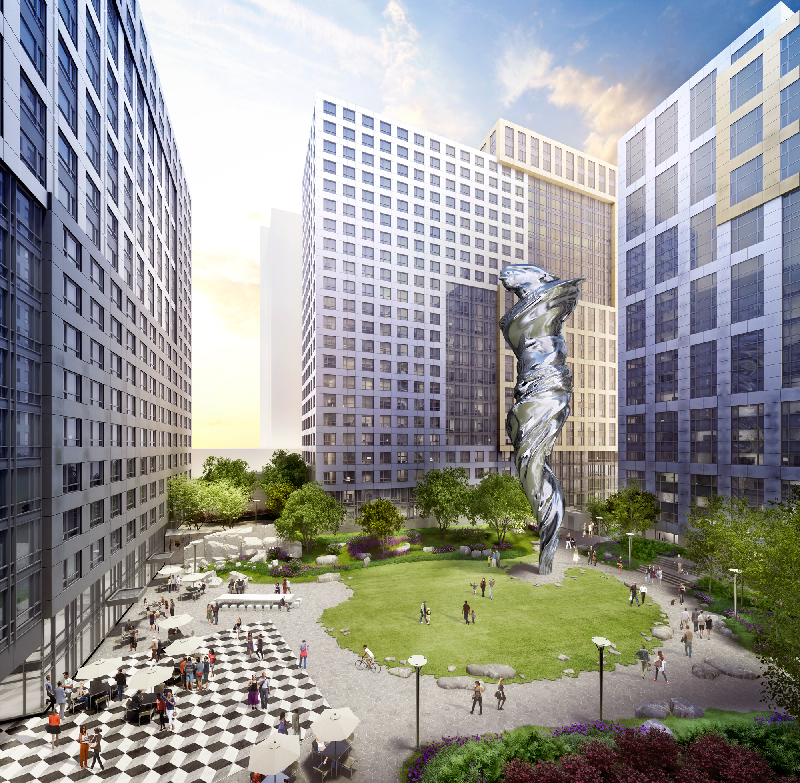 SAN FRANCISCO–Trinity Properties, one of San Francisco’s leading residential real estate developers and a pioneer in the revitalization of the Mid-Market area, celebrated the public opening of Piazza Angelo, a one-acre public piazza honoring developer and donor Angelo Sangiacomo and located in the heart of Trinity Place, a 1,900-unit apartment complex on 8th Street between Market and Mission streets. The piazza will serve as the permanent home of a singular collection of sculptural art designed by renowned artist Lawrence Argent, including the spectacular 92-foot stainless steel sculpture Venus, which is only slightly shorter than the Statue of Liberty (111.5 feet from heel to crown).

The ceremony, which took place on Thursday, May 18, was attended by Yvonne Sangiacomo, the Sangiacomo family, San Francisco Mayor Ed Lee, former mayor Willie Brown, artist Lawrence Argent, designing architect Bernardo Fort-Brescia, and more than 300 friends and dignitaries. The ceremony was capped off by legendary singer Frankie Avalon serenading Yvonne Sangiacomo and the audience with a performance that included his 1959 classic hit single, “Venus.”

Trinity Place — located in the heart of San Francisco’s burgeoning Mid-Market district, home to tech innovators Twitter, Square, Dolby Labs and Uber — is the vision of San Francisco real estate developer Angelo Sangiacomo, who purchased the 4.5-acre site in 1977, began construction of Trinity Place in 2007, and welcomed the first residents in 2010. Sangiacomo, who passed away in December 2015 at the age of 91, was an early catalyst of the dramatic changes in the Mid-Market area. He created the piazza and its art collection as a lasting gift to his beloved San Francisco.

The centerpiece of the piazza is the astonishing Venus, Argent’s modern interpretation of the Venus de Milo. Graceful and expressive, the statue is made of 2,500 stainless steel panels welded together by skilled artisans using a highly specialized technique that renders all seams undetectable.

Other pieces at Trinity Place include a modern interpretation of The Three Graces set among scattered stones meant to evoke images of treasures slowly unearthed; a 20-seat Carrara marble table carved from a single 23-foot slab where people can gather for lunch or to meet friends; seven-foot glass bollards weighing 10,000 pounds each with illuminated hollow centers showcasing sculptures within the glass; a nine-foot white marble dove; bronze gates patterned to replicate the street map of ancient Genoa; and an intricately designed mosaic path through the piazza, connecting Market Street to Mission Street.

“It’s very exciting and very moving to see Angelo’s vision come to fruition at Trinity Place nearly 40 years after he purchased the site,” said Walter Schmidt, CEO of Trinity Properties. “Angelo loved San Francisco and knew that the Mid-Market area had the potential to return to the grandeur of its heyday. This was his final project, and a very personal one. It’s a great honor to bring Piazza Angelo and Trinity Place to life.”

For more information, following is a link to the Trinity Place press kit:
https://www.dropbox.com/sh/k31z59wbvc395q2/AACKEnYcfkaqdQ19E-rMoztra?dl=0