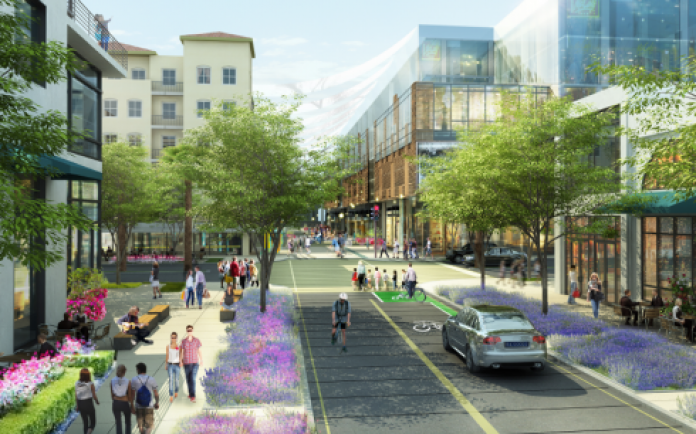 San Jose-based Republic Urban Properties LLC is planning an approximately $200 million mixed-use development that would replace surface parking on the east side of the BART station.

Gateway at Millbrae Station, which would sit on about nine acres of BART-owned land, is expected to include 150,000 square feet of office space, up to 45,000 square feet of retail space and as many as 350 market-rate apartments along with a 110-room extended-stay hotel, likely under a Hilton or Marriott flag, said Michael R. Van Every, president and CEO of Republic Urban. The company is working with BART on a replacement parking strategy based on a transit study that is under way.

“We want to make it a destination for BART riders, for residents, for employees and then, of course, for the greater surrounding communities,” Van Every said. “We’d like to take the next step and say how can we not just serve commuters, but how can we serve the greater region and Millbrae itself by redefining what we consider a gateway location.”

City approvals are pending, but Republic Urban, which is part of the Republic Family of Companies with offices in Washington, D.C. and Reston, Va., looks to break ground on the project by late 2015. The build-out should take five to seven years, Van Every said.

The project would be part of BART’s overall plan to create more transit-oriented developments around its stations to increase ridership and boost revenue, said Ellen Smith, a project manager at BART.

“The goal is to have higher ridership as a result of having uses surrounding the station that would bring more riders to us than the parking spaces do,” Smith said.

Because the Millbrae station also is a Caltrain station and includes a SamTrans bus pickup and drop-off area, the three agencies are coordinating to ensure “all access modes are supported” by the new development, Smith said. The station also is slated to be a stop on the planned high-speed rail line.

Additionally, Serra Station Properties is proposing a mixed-use project on 3.5 acres west of the BART station. That development would include approximately 270,000 square feet of office space, 32,000 square feet of retail space and 500 residential units, according to a report from the City of Millbrae. Serra Station is led by Vincent Muzzi, who did not return a call for comment.

Both projects are being analyzed by the city as it works to update its Millbrae Station Area Specific Plan and supporting environmental impact report. The specific plan, adopted in 1998, aims to redefine a vision for an approximately 116-acre area around the Millbrae BART/Caltrain Station and was adopted to encourage sustainable smart growth around the transit station. Republic Urban’s and Serra Station’s projects fall within the specific plan area. The updates will include changes such as land-use density and height requirements, Kelly said. Hearings about the plans with the planning commission and city council are expected during the first quarter of 2015.