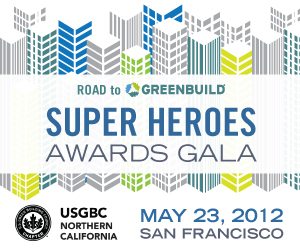 San Francisco, Calif. – (May 16, 2012) – The U.S. Green Building Council Northern California Chapter (USGBC-NCC) announced the finalists for its Green Building Super Heroes Awards, which will recognize organizations and individuals who are transforming the built environment towards a healthy, sustainable future. Rick Fedrizzi, President, CEO & Founding Chair of USGBC will join green building industry leaders at the sixth annual Super Heroes Awards Gala to recognize and celebrate the 2012 finalists and winners. The Super Heroes Awards Gala will take place on May 23 at Intercontinental Hotel in San Francisco, Calif.

The Super Heroes Awards Gala is the kickoff to the Road to Greenbuild, USGBC-NCC’s larger initiative to build excitement for Greenbuild, the world’s largest conference and expo dedicated to green building being held Nov. 14-16 in San Francisco.

The coveted Groundbreaker Award will recognize multiple Silicon Valley global brands who have partnered with USGBC-NCC on a visionary leadership initiative that will, over the next two years, underscore California’s green building leadership. This year’s nominees and the initiative itself will remain secret until the unveiling at the event.

“Through leadership, innovation, and sheer passion, this year’s Super Heroes are working to reshape our buildings and communities,” said Dan Geiger, Executive Director of USGBC-NCC. “While these Super Heroes are local to our community, their work has made deep, lasting impacts within the global green building realm, and we are eager to commend and celebrate their accomplishments.”

The David Gottfried Special Achievement Award will be given to Kevin Hydes, President and CEO of Integral Group, for his internationally recognized leadership, commitment and contributions to the green building industry. The award will be presented by David Gottfried, USGBC Founder and CEO of Regenerative Ventures.

The Outstanding Green Portfolio Award honors a company or organization whose real estate portfolio demonstrates exceptional leadership and innovation in the adoption of green building standards and practices. This year’s award finalists are The City and County of San Francisco, Google, Inc., and Hines.

The Outstanding Community Organization Award recognizes a non-profit organization that has demonstrated a profound impact on their community through their commitment to sustainability and social equity. This year’s award finalists are First Community Housing, Inc. and Urban Solutions.

USGBC-NCC is one of the largest in USGBC’s network of 79 chapters, serving as the local voice for USGBC’s mission of market transformation. The volunteer-supported organization educates, motivates, provides resources and advocates for industry transformation to build and maintain sustainable communities.

To attend to the Super Heroes Awards Gala, visit usgbc-ncc.org.

About USGBC-NCC
USGBC-NCC is one of the largest USGBC Chapters in the country, with 22,000 constituents, 10,000+ LEED credentialed professionals, and more than 5% of the world’s LEED certified square footage. The Chapter hosts more than 150+ annual events, workshops, and conferences with regional, national and international organizations, and is a leading voice in green building public policy. As the premier green building organization in the region, USGBC-NCC plays a pivotal role as a convener, mobilizer and educator in transforming the built environment. usgbc-ncc.org.

The Registry - February 9, 2023 0
Latest Luxury Senior Living Community to Open in 2024 in Bishop Ranch in a Continued Effort to Add Housing to San Ramon, Luxury Senior...