The retail market may be recovering in some part of the Bay Area, but one investor just pulled the plug on an investment it had in San Francisco’s Union Square. The Vanbarton Group, with corporate offices in both New York City and San Francisco, has sold the 12,281 square foot retail asset in San Francisco located at 39 Stockton Street for $11 million, according to multiple sources familiar with the transaction. The real estate investment firm had acquired the property for $27.5 million in early 2017, according to public records.

Vanbarton declined to comment when contacted for the story. The new owner of the property is The Sterling Organization, a private real estate equity firm based in West Palm Beach, Fla.

A factor in the sale of the property was that the loan on the property was about to mature. This was a $16 million first mortgage, which at the time of sale had a balance of $10 million, according to sources. The five-year floating-rate debt had been provided by Mesa West Capital. It was provided on behalf of the firm’s Mesa West Real Estate Income Fund IV.

When the seller had acquired the property, it was 100 percent leased to The Disney Store. The tenant made a decision last year to close this store. It was part of a financial decision made by Disney to shutter many of its stores nationally as the company shifted its focus to e-commerce and stated plans to open more than 100 Disney shops inside of Target Stores around the country.

Industry sources are expecting that it will be a long time before this retail sub market in San Francisco turns around. According to some estimates it may take anywhere in the range of five to 10 years. The direct vacancy for retail in the Union Square sub market is now as high as 45 percent with the shadow vacancy approaching the range of 65 percent, according to one source who declined to be named but had a financial interest in the market and was aware of the retail sector in San Francisco.

The Union Square sub market has seen many retail stores close over the last two years. Some examples of this have been Uniqlo, H&M, Marshalls, Gap, Forever 21 and Abercrombie & Fitch.

Vanbarton is known as a buyer of office, apartments, retail and hospitality assets for its separate account institutional clients. For now, the manager is taking a pause for investing more capital into the San Francisco Bay Area, according to sources familiar with the company’s activities. It now is pursuing some investment opportunities in Seattle, including the Eastside city of Bellevue. 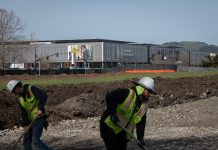 The Registry - February 9, 2023 0
Latest Luxury Senior Living Community to Open in 2024 in Bishop Ranch in a Continued Effort to Add Housing to San Ramon, Luxury Senior...