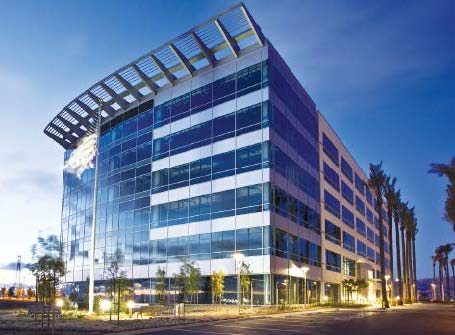 In a brief, well-attended and lively ceremony, Polycom Chief Executive Andy Miller and San Jose Mayor Chuck Reed christened the new workplace amidst a scrum of economic development and city-planning executives as well as a clearly elated crowd of Polycom employees.

The event marks a major milestone for the $1.5 billion, 20-year-old company, Miller said, and the new offices provide a platform for its expansion over the next two decades. The 235,000-square-foot building features a fully outfitted Executive Experience Center where visitors can see, touch, feel and live Polycom offerings.

“We plan to host 1,000 visitors a year at this Experience Center—an average of three a day,” Miller said. “It will set the pace for the next 20 years for innovative, collaborative technology where we think we are a worldwide leader. One hundred percent of the Fortune 100 [companies] have Polycom in their offices.”

Meanwhile, less than three miles away, Southern California’s Irvine Co. continues to expand its already significant multifamily footprint in the North San Jose region. The company has acquired two parcels in the district where it plans approximately 1,640 additional apartments.

The Wyse site’s North First Street location is immediately across the street from Irvine’s existing North Park Apartment Village, where the company has 2,750 units developed between 2001 and 2007. It is building another 1,750 apartments at its neighboring Crescent Village. About 200 of those are complete, and another 1,200 should be done by next spring. The remainder will be done in the second half of next year.

The Polycom headquarters is also less than 1.5 miles from the new San Francisco 49ers stadium being built in Santa Clara, and is across the Southbay Freeway from another Irvine Co. development, Santa Clara Gateway. That project is a large-scale office development where Irvine is constructing on a speculative basis not quite 450,000 square feet in three, five-story buildings. They are the first phase of more than 900,000 square feet ultimately planned.

Polycom sells sophisticated video-teleconferencing equipment for use in business, health care, education and other settings. Its technology allows users not only to see one another in real time with a great degree of fidelity but also to converse one-on-one as well as in larger conference locations. It also allows users to exchange documents and to contribute ideas on a shared electronic whiteboard. It is also interactive with mobile electronic devices.

“It is the same way you would use the telephone but through video,” said Robert Teed, the company’s vice president of workplace solutions globally and the mastermind behind the new headquarters. “You can share content. You can look at drawings. I have done building tours and potential leasing tours using Polycom equipment.”

The headquarters feature almost no private offices and instead embrace an open-plan environment where “every nook and cranny of the building is video capable,” he said. Despite his worldwide responsibilities, the technology allows him to do all of his work from San Jose, Teed said.

Polycom is a head-to-head competitor of Cisco Systems Inc., historically San Jose’s largest employer. Among its Bay Area-based customers are the Hewlett-Packard Co., Adobe Systems Inc. and Juniper Networks Inc., a Polycom spokesperson said. All three customer companies have offices within a short drive of the new Polycom digs. Polycom’s products also have been embraced by the federal government, including the U.S. Department of Energy, Department of Transportation, Department of the Interior and Department of Defense—including the Army, Navy and Air Force.

Polycom leased 6001 America Center Drive in mid-2011, allowing it to consolidate offices in Tracy, Pleasanton and San Jose into a single location. The company signed a 10-year contract with Legacy Partners for the North San Jose space. So far, Polycom has improved 178,000 square feet of the building and expects to grow into the full building as its annual revenue climbs to $5 billion, Teed said.

The location and property fit the company’s needs for a variety of reasons, Teed said. When it began looking, the selection of locations with enough space to accommodate its demands was limited. The company considered San Francisco but ultimately voted for San Jose because of “the depth and history of talent in Silicon Valley.” The company has initiated a shuttle service to ease the commute burden for the employees who live in Pleasanton.

At present 450 to 500 workers occupy the space, but the expectation is for that total to reach as high as 700, Teed said.

The company became aware of the location three years ago after he wound up occupying a seat next to a partner with Legacy on an airplane flight from New York City back to the Bay Area, Chief Executive Miller said. He praised San Jose officials for their work and responsiveness.

“We hope these 600 jobs are a down payment on many more,” Mayor Reed said. “We are proud that we export jobs to the rest of the country and the rest of the world, but our job is to get as many of them here as we can.

“People ask me, ‘What is the secret of Silicon Valley?’” Reed said. It is neither the infrastructure nor the educational opportunities. “It is the people from all over the world and their desire to work hard, and our focus on what we have in common.”