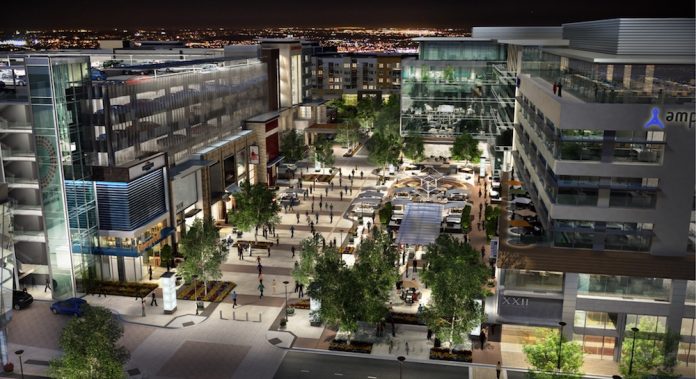 WeWork is moving fast to transform its business model as the company known for its shared workspace offering is looking to become a bigger player in the commercial office leasing space. According to several sources from the industry, WeWork Enterprise just subleased the entire available office component of The Village at San Antonio Station in Mountain View from LinkedIn. The two-building property totals just over 450,000 square feet, and WeWork is in talks with several technology companies to lease the space to them. According to the sources, Amazon and Facebook are potential tenants that WeWork is looking to bring to the property.

The Village at San Antonio Station is a mixed-use development in Mountain View that sits on the southeast side of San Antonio Road just north of El Camino Real. The project is part of a 56-acre development that includes residential buildings, retail, hospitality and office properties. The two, six-story buildings offer a total of 456,760 rentable square feet with a potential to expand to 556,000 square feet in the future. The entire development offers over 20 restaurants, a 330-unit Carmel the Village apartments and a 168-room Hyatt Centric Village Hotel and Conference Center. The complex also has an eight-screen cinema, as well as two 24-hour fitness centers.

680 additional residential units are under construction in the area, as well as over 300 units planned across California Ave.

The office component, which WeWork just took over, has one building with roughly 218,000 square feet and the other with approximately 239,000 square feet. The buildings feature 40,000 square-foot floor plates, and the buildings are lined with highly efficient View dynamic glass windows, according to the property’s brochure.

The proximity of the development to other corporate users offers some indication of the buildings’ overall opportunity. Google has a property just blocks away from the development, and the Stanford Research Park is just minutes to the north on El Camino Real.

According to sources, the deal closed on Friday, October 20th, 2017.

WeWork Enterprise is a distinct operating unit at WeWork that focuses on corporate end users and touts office solutions for teams of any size. The company says that using WeWork will provide its corporate customers convenience—no long-term leases—as well as significant operational cost savings. WeWork says its Enterprise service should cost tenants 25 percent less than a typical office lease. The company is looking to take on administrative expenses, office amenities, cleaning & maintenance, design & construction and rent expenses for their tenants. The service, called Custom Builds, offers to make this a possibility for “a handful of offices, a floor, or even a whole building.” Or, as in this case, two buildings in Mountain View.

WeWork has made significant inroads into the corporate real estate space, and this move signals the company’s readiness to take on much larger opportunities and potentially disrupt the office market as we know it today. The company just raised $4.4 billion from Softbank Vision Fund, which includes other investors. That investment includes $1.4 billion earmarked to help WeWork expand throughout China, Japan and Southeast Asia, as well as $3 billion in growth funding into WeWork’s parent company, according to a report from CNBC.

Other investors include real estate enterprises like Boston Properties, as well as San Francisco-based DivcoWest.