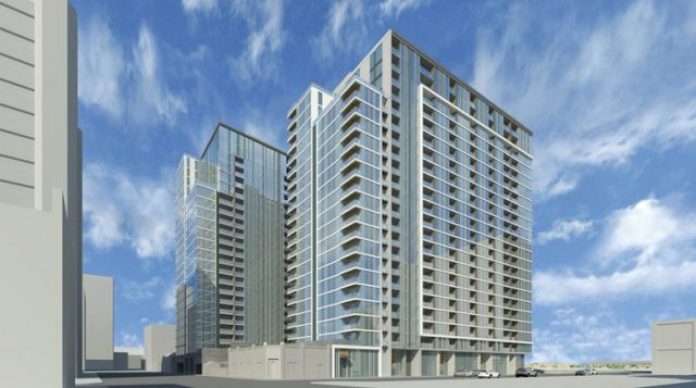 While the multifamily market across Northern California continues to hit its stride, some investors are looking to cash in on the investments they made years ago. China-based Z&L Properties has decided to place up for sale the fully-entitled apartment development site in downtown San Jose, The Pacific, located at 60 – 70 South Almaden Avenue. There is no pricing guidance available on the sale at this time.

The seller has owned the property since 2016. According to sources familiar with the property and public records reviewed by The Registry, Z&L acquired the site in April of that year for $39 million. The seller at the time was KT Urban, which in turn, purchased the site for $33.5 million earlier from Greyhound and had taken the site through the approval process.

Z&L has selected the San Jose office of CBRE to be the listing agent for the sale of the property. Those working on the transaction include Jefrey Henderson, executive vice president, and Jon Teel, first vice president.

“We are expecting that the main interest in the site would be apartment developers. The new owner would have the option of keeping the entitlements as they are or going through a new entitlement process for fewer units,” said Henderson.

The projection is that if the current entitlements are kept, the project could start development sometime toward the end of this year. The development would then take around 30 months to be completed from start to finish. There is an existing building on the site that Greyhound used as a bus terminal at one time.

As currently planned, the development is entitled for 708 units. This project is the second largest fully-entitled apartment development project in downtown San Jose, and all of the units would be developed as market-rate units. This is due to a law in the City of San Jose that provides a high-rise exemption in the downtown core that allows any high-rise that is started before 2028 to exclude any affordable units in the project.

The Pacific is a project that is planned for a total of 24 floors. The development will also have 20,000 square feet of retail space on a site that covers 1.63 acres. There is a total of 610 parking spaces factored into the project.

The site is located near several major commercial development projects and is close to many amenities. Some projects include the 840,000-square-foot Fifty South by JP DiNapoli, the 937,000-square-foot 200 Park project by Jay Paul Company and the 3.6-million-square-foot CityView Plaza Mega Campus also by Jay Paul. The Pacific site is also two blocks from the San Pedro Square Market and ½ mile from the San Jose State University campus.