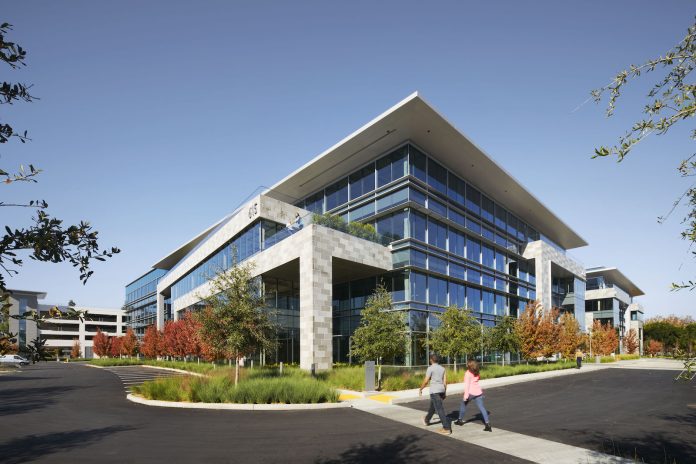 In a sign that interest in attractive, modern Class-A office space is still alive, Cupertino-based Apple has taken 382,484 square feet in Sunnyvale at Jay Paul’s Mathilda Commons. The technology stalwart has leased the entire property located at 625/655 North Mathilda Avenue, and it will expand its presence in this city in one of the most active technology office markets in the region.

Mathilda Commons is a new office property in Sunnyvale, and it is a highly amenitized campus that offers two four-story Class A office buildings, a 15,477 square-foot fitness center, a 9,704 square-foot rooftop terrace as well as a 4 story parking structure with an integrated transportation center, according to property’s website.

The buildings are designed to achieve LEED Platinum and Fitwel certification and feature ample outside areas, balconies and proximity to a number of amenities that are part of downtown Sunnyvale.

The property was marketed by Newmark’s Phil Mahoney, Mike Saign and Julia Szabo. Newmark would only confirm that the property was not available for lease anymore.

The leasing market across Silicon Valley has seen somewhat of a bounce over the last couple of quarters. According to a recent industry market report by Newmark, during the first quarter of 2022, Silicon Valley’s office market had a second consecutive quarter of positive net absorption, at 1,754,565 square feet. Similarly, gross absorption almost doubled quarter-over-quarter from 1,540,051 square feet to 3,049,779 square feet, stated the report.

Sunnyvale is one of the best office markets in Silicon Valley, according to Newmark’s report, offering 9.14 percent vacancy, compared to 15.7 percent across Silicon Valley. Overall, the city is the second-largest office market following only its larger neighbor, San Jose. Sunnyvale offers roughly 18 million square feet of office space, while San Jose is around 30 million square feet. Also, Sunnyvale is the second most desirable location—it boasts the second-highest average asking rent of $7.49, bested only by downtown Mountain View, which is at $9.29.

Developer Jay Paul Company is a privately held, opportunity-driven real estate firm based in San Francisco, based on the property’s website. The company was founded in 1975, and it concentrates on the acquisition, development and management of prime commercial properties throughout California. Jay Paul Company has delivered over eleven million square feet of institutional quality space with an additional six million square feet in its active development pipeline, the website states.