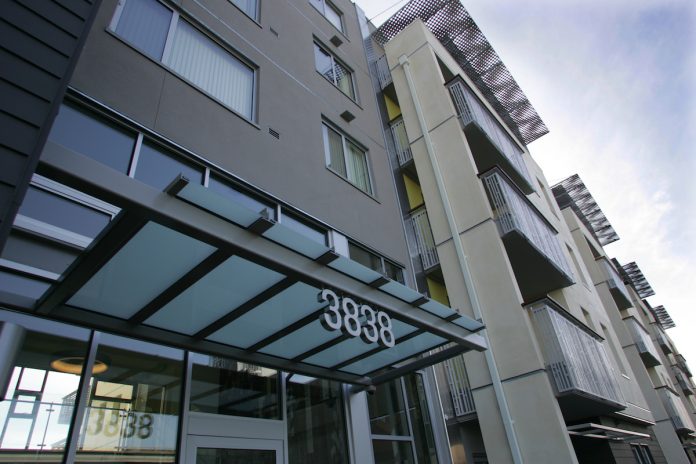 After 23 years of deliberation, the Mural affordable housing project had its grand opening March 21 where Oakland Mayor Libby Schaaf spoke at the formal ribbon cutting calling the project “an exercise of persistence.” Award-winning nonprofit developer BRIDGE Housing completed the 90-unit project after starting construction in 2013.

The $43.8 million residential building is the first transit-oriented project for the MacArthur Station. The development at 3838 Turquoise Way is a joint project between landowner BART and Bridge to provide housing to families at the cost of $460 to $1,134 per month. The housing is oriented to those families with annual incomes from $27,600 to $46,000, which represents 30 to 50 percent of the Bay Area median income. There were over 5,000 applicants when the application process began in July 2015, and now it is home to 89 low-income earning families.

[contextly_sidebar id=”s6qAOFMHdcrlNPTI3VuZ5OPDTkCoOVvh”]Mayor Schaaf addressed the public at the ribbon cutting stressing the timing and the need for housing across the region. “Here we finally are, and we could not have finished it a moment too soon because we are in the throes of an affordability crisis,” she said. Schaaf stressed the importance of building the project near MacArthur Station citing the connection between rental cost, transportation and access to jobs.

Originally proposed to the city in 1993, the 0.78-acre site is part of a larger 7.76-acre master plan that is expected to provide 675 new homes in five buildings with 20 percent of those homes at below market rates. The rest of the units will be at market rate, and all of the units will be mixed together sharing the same village space.

Housing advocate Walter Miles who is part of the BART Citizens Action Committee originally campaigned for 2,400 units, but the final number is now estimated at 135 units according to a Bridge press release. Multiple city officials speaking at the event mentioned Miles’ persistent 23-yearlong battle to get the project off the ground.

The apartment sizes range from studio, one-, two-, and three-bedrooms, and the building will include a large community room, kitchen, laundry facilities, two landscaped courtyards and a playground. About 5,000 square feet will be dedicated to community use in the form of biking and walking paths and 42,500 square feet of local commercial and retail.

The site will have an underground parking garage with 478-spaces for BART patrons and guests. District 7 BART Director Zakhary Mallett said that the “project is definitely an icon and represents movement forward. The community is moving toward a walkable, bikeable, livable-based community.” He explained that because of the city’s location near the station they were able to reduce parking by 50 percent.

The project completion comes as the Bay Area’s housing crisis escalates. President and CEO of BRIDGE Housing Corporation Cynthia Parker spoke at the event pointing out the difficulties of completing an affordable housing project in the Bay Area, “You can see that although it always takes a village in some places, and particularly sometimes with these kinds of conflict projects, [in some cases] it takes an entire metropolis.”