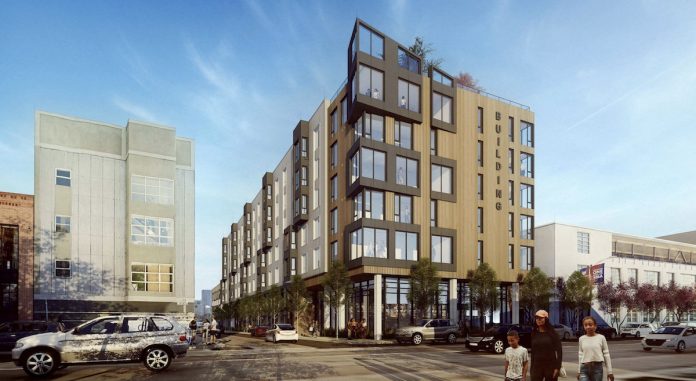 A 218-unit group home project planned for San Francisco’s SoMa neighborhood remains in review nearly a year after it was initially proposed by Carmel Partners. The San Francisco-based multifamily developer submitted an application to the City in May of 2021, and most recently in March, revealed new renderings for the project.

The development would be located at 925 Bryant Street and include the construction of a 127,467 square-foot building totaling seven stories and including ground floor retail space.

Renderings for the project by Bar Architects also show a number of amenities, including a 4,816 square-foot rooftop deck, a landscaped courtyard and a 1,070 square-foot basement. The project also includes shared kitchen, dining room and living room spaces.

According to project plans, the development responds to the surrounding area through the activation of the street level through pedestrian-friendly plantings and the use of glass for transparency at the ground-floor level. The project is also designed to mirror the industrial architecture style of other buildings throughout the SoMa neighborhood, with renderings showing a mix of structural concrete, metal and wood siding.

Currently, the project site is developed with a 13,000 square-foot warehouse building and a 7,000 square-foot surface parking lot. Should the project receive approval, onsite structures would be demolished to make way for the planned development. Construction is anticipated to last approximately 20 months once approved.

The development would be located just off Interstate 80, with other multifamily apartment buildings close by, including the Astella Apartments and The Slate Residences.

The development would also not be far from several other Carmel Partners-owned buildings. For instance, the property is a short drive to Carmel Partners’ 320-unit apartment community at 88 Howard Street. Also in San Francisco, the company owns Grosvenor Suites, a 205-unit building at 899 Pine Street.

As well as in San Francisco, Carmel Partners owns multifamily assets in Southern California, Seattle, Denver, Washington D.C., New York and Honolulu. Since its founding in 1996, the firm has bought and renovated or developed more than 43,000 apartment units with an estimated value of $13.5 billion.