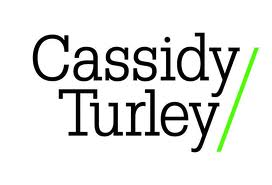 San Francisco, CA – May 3, 2012 – Cassidy Turley, a leading commercial real estate services provider in the U.S., is pleased to welcome two leading mortgage brokerage professionals, Terry Daly and Kurt Scheidt as Senior Vice Presidents/Partners. They will be located in the firm’s San Francisco office. Prior to joining Cassidy Turley, both professionals were Principals and co-founders of Kearny Capital Partners, a leading commercial mortgage brokerage firm based in San Francisco.

“Cassidy Turley is continuing to expand its capital markets group in San Francisco and across the nation by attracting some of the best talent in the industry – talented people like Terry Daly and Kurt Scheidt,” said Mike Kamm, CEO of the Northern California region of Cassidy Turley.

Greg Moss, Managing Partner of the firm’s San Francisco office, stated, “The addition of Terry and Kurt to our Capital Markets platform is a tremendous gain for our firm and instantly gives us a stronger presence in the financial arena in the Western United States.” He added, “Terry’s and Kurt’s experience and expertise will allow us to provide our investor clients with more integrated suite of capital market solutions.”

For many years, Mr. Daly has been responsible for the origination, analysis and placement of real estate capital throughout the United States. Prior to starting Kearny Capital Partners, he spent three years as Vice President in the Capital Markets Unit at Cohen Financial. Before joining Cohen Financial, Mr. Daly practiced real estate law at the firm of Hopkins & Carley. He received his Juris Doctorate from the University of California, Hastings College of the Law where he graduated cum laude. He completed his Bachelor of Arts degree at the University of California, Santa Barbara. Mr. Daly is currently the President and a board member of the San Francisco Chapter of NAIOP and is an active member of the Bay Area Mortgage Association and California Receivers Forum.

During his career, Mr. Scheidt has established himself as one of Northern California’s leading brokers of commercial real estate debt and equity. His emphasis has traditionally been arranging non-recourse, high leverage bridge debt, in addition to the traditional Life Company/CMBS markets. Mr. Scheidt began his real estate career in the 1980s as a loan officer at The Travelers in San Francisco where he was the top producer in the Western United States. He would later join The San Francisco office of George Smith/ Grubb and Ellis Financial Services. In the 1990s, along with his two partners, he formed Merriman Mortgage Partners, the mortgage brokerage arm of one of San Francisco’s oldest mortgage banking firms, E.S. Merriman and Sons. Upon the acquisition of E.S. Merriman and Sons by Cohen Financial, he joined Cohen where he became one of the leading producers in the company including Top Producer for the flagship San Francisco office. Mr. Scheidt is a graduate from the University of Southern California.

Mr. Daly and Mr. Scheidt have been involved in the recapitalization, acquisition, equity, refinancing, financing, or construction loan of countless assets comprised of an array of smaller to high profile commercial properties located throughout the United States. In total, while at Kearny Capital, Mr. Scheidt and Mr. Daly were involved in more than 150 transactions valued at over $2.5 billion in capital.

Mr. Daly stated, “We are excited to join such a respected market leader in Cassidy Turley and we look forward to working directly with all of our new team members in San Francisco and companywide. Strategically and competitively, this is a mutual win for all of us, and the extensive resources at our fingertips through the Cassidy Turley platform will enable us all to provide an elite level of financial service to our clients.”