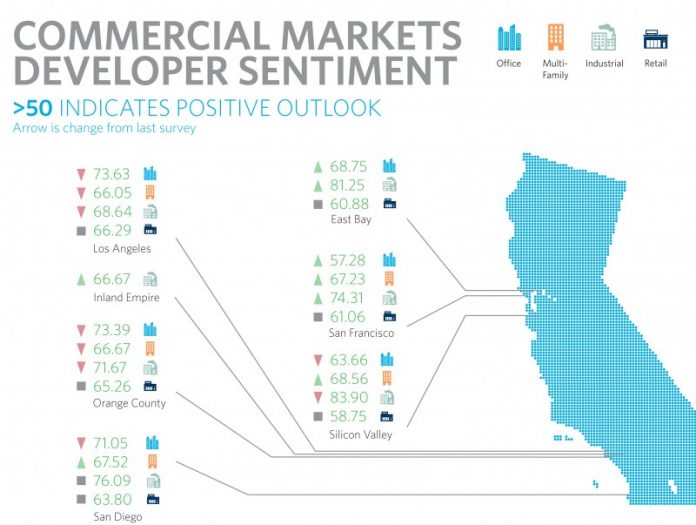 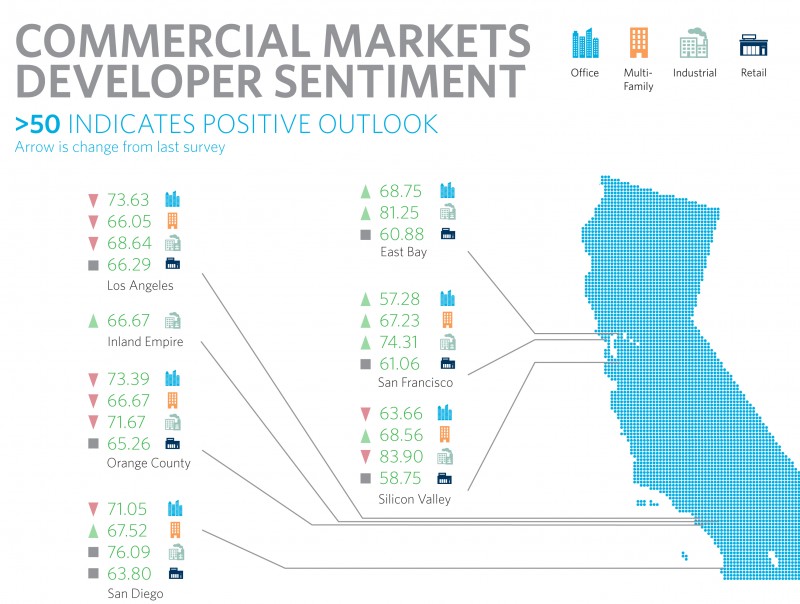 The Survey, taken by California’s commercial real estate industry leaders in December 2015, indicates “continued optimism with only a smattering of caution with respect to the continuation of the current run,” says Jerry Nickelsburg, adjunct professor of economics at UCLA Anderson School of Management and senior economist with the UCLA Anderson Forecast. “The favorable outlook is supported by job and income growth on the demand side and a lack of sufficient building on the supply side.” The results of the surveyed panelists signal a continuation of the growth of non-residential construction at or above previous peak levels.

Office Development Sentiment Positive with Southern California in Spotlight
The majority of office developers had a promising outlook on California’s coastal cities. However, while expectation is high, it is slightly lower than last year given the “general mood of investors that although the U.S. economy continues to grow, slower growth outside the U.S. and somewhat more volatile world financial markets dictate a bit of prudent caution,” according to the Survey. Technology companies seeking non-traditional office parks are still driving the majority of the demand, therefore “areas favored by these companies are experiencing robust markets,” the Survey adds.

Sentiment in the office space market remains highest in Southern California, likely due to the increased rate of job growth in the region and a tightening of office space supply. One in three of the Southern California panelists, including those from Los Angeles, Orange County and San Diego, began a new project during the previous 12 months, up significantly from less than one out of four surveyed in June 2015. Looking ahead, 42 percent of those surveyed in Southern California indicated that they would start one or more projects within the next 12 months.

Panelists were optimistic about the Bay Area, but not as much as Southern California. The San Francisco and Silicon Valley panelists view the current five percent growth rate of office-using employment in San Francisco and seven percent in Silicon Valley as unsustainable, therefore developers do not expect a dramatic improvement in an already very good market during the coming three years. This made the East Bay an attractive investment in the eyes of surveyed panelists, despite the area’s sluggish office-using employment growth.

Ecommerce Has Unlikely Impact on Retail Development
Retail development has surprisingly shown steady growth across all markets. While ecommerce continues to be a growing trend among consumers, the Survey’s positive sentiment suggests developers have realized the most successful retail centers are those that offer consumers enticing dining options, entertainment and a wide variety of merchandisers, many of which are now utilizing smaller retail space.

“Retail is moving from being a distribution outlet where you go to a store just to buy something to being an experience,” says Nickelsburg. “To create that experiential aspect of retail, you need to do more building.”

This evolution of brick-and-mortar shopping has sparked both new construction and significant redevelopment. There also has been an increase in retail development opportunities with robust growth in sub-markets and the increased placement of retail space in new mixed-use projects. Two-thirds of the Survey’s panelists stated that they were planning new retail construction in the coming 12 months, in addition to half of the panelists who stated they started at least one retail project in 2015.

Multi-family Construction to Hit 25-year High
Multi-family developer certainty has remained strong and consistent over the two years the survey has been conducted for this sector. All panels surveyed, with the exception of Los Angeles, anticipate tightening vacancy over the next three years. Los Angeles panelists expect the vacancy rate to increase over the next three years even as rental rates continue to rise. The building of new apartments in Los Angeles is therefore expected to ease some of the shortfall in housing units, even while higher rental rates permit lessors to tolerate somewhat higher vacancies. Consistent with this, the outlook for multi-family construction is for a 25-year high to be reached during the next three years.

Industrial Sector Grounded by Strong Fundamentals
There is also a strong outlook in the industrial markets for manufacturing and warehousing facilities that support exports to Asia and Mexico, and consumer goods imported from Asia. Seventy-five percent of both the Southern California and the Bay Area industrial developer panels are planning one or more new projects in 2016. This comes on the heels of 66 percent having started at least one new development project during the past 12 months.

About Allen Matkins
Allen Matkins, founded in 1977, is a California-based law firm with approximately 200 attorneys in four major metropolitan areas of California: Los Angeles, Orange County, San Diego and San Francisco. The firm’s areas of focus include real estate, construction, land use, environmental and natural resources; corporate and securities, real estate and commercial finance, bankruptcy, restructurings and creditors’ rights, joint ventures and tax; labor, employment and OSHA; and trials, litigation, risk management and alternative dispute resolution in all of these areas. Allen Matkins is located on the web at www.allenmatkins.com.

About UCLA Anderson School of Management
UCLA Anderson School of Management is among the leading business schools in the world, with faculty members globally renowned for their teaching excellence and research in advancing management thinking. Located in Los Angeles, gateway to the growing economies of Latin America and Asia and a city that personifies innovation in a diverse range of endeavors, UCLA Anderson’s MBA, Fully-Employed MBA, Executive MBA, Global Executive MBA for Asia Pacific, Global Executive MBA for the Americas, Master of Financial Engineering, doctoral and executive education programs embody the school’s Think In The Next ethos. Annually, some 1,800 students are trained to be global leaders seeking the business models and community solutions of tomorrow.