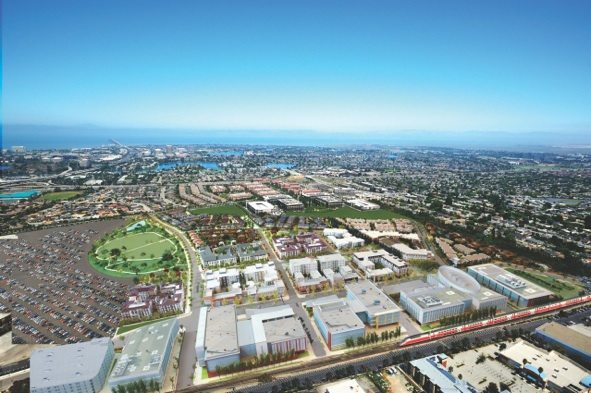 San Francisco’s Wilson Meany Sullivan has sold its first residential parcel in San Mateo’s Bay Meadows to TRI Pointe Homes. The Irvine-based homebuilder plans to complete its models by the beginning of next year and to begin sales perhaps as soon as September for the 63 town home subdivision in the 83-acre development.

Wilson Meany also is in contract with a second homebuilder for a neighboring site entitled for 93 town homes. That sale is expected to close in the next 30 days. Wilson Meany itself plans to begin construction on a 108-unit apartment complex at Bay Meadows for its own account by the end of this year. 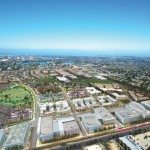 The property sales and vertical development starts mark a significant milestone for the mixed-use community after years in planning followed by the economic plunge of 2008 and 2009. During the downturn, the developer and its San Francisco financial partner Stockbridge Capital Group continued to pour millions of dollars into roads, sidewalks and other infrastructure. That bet now appears to be paying off.

Bay Meadows is slated to have at least 1,000 homes and apartments in 14 communities, up to 1.5 million square feet of offices and not quite 100,000 square feet of retail space. It also abuts a Caltrain station. Access to the commuter line that connects San Francisco to Silicon Valley via the Peninsula has proven a more crucial distinction in this real estate cycle than ever before, with commercial and residential property owners reporting price premiums for proximate sites and developments.

“We are very excited. Lots of good things are happening, and the timing seems right,” said WMS partner Janice Thacher. The developer anticipates breaking ground on a 12-acre community park later this month or early next and a 1.5-acre neighborhood park, she said.

The land sales come as the region’s housing market shows every sign of energetic recovery. Peninsula home values have risen 5 percent to 6 percent in the last month and a half alone, said Chris Foley, founder and principal of The Polaris Group, which tracks markets and advises developers statewide. “The market on the Peninsula is accelerating rapidly,” Foley said. “The fact that Wilson Meany has stayed true to their vision through the downturn shows a remarkable focus when a lot of other people threw up their hands.”

Wilson Meany declined to disclose a sales price as did TRI Pointe Homes. Foley said he was aware of the amount but not at liberty to release it. “It is a very strong number,” he said. “Otherwise WMS would not be a seller.”

Bay Meadows’ residential land values are enhanced by the “turnkey” nature of the development for homebuilders, Foley said. Because the community has been master planned, including architectural design, and entitlements are in place, homebuilders face less risk and potential headaches. TRI’s Amelia subdivision in Bay Meadows was designed by Irvine-based KTGY Architecture + Planning, which also has Oakland offices.

Polaris is marketing One Marina for The Pauls Corp., a 231-unit Redwood City town home development that went on the market in December. Buyer traffic has grown rapidly in the last two months “and the willingness to buy has gotten a lot firmer,” Foley said. People are motivated by low interest rates and the sense that the market’s bottom is behind them. So far, five homes have been sold and 21 put under contract, according to Polaris’ March development report on Silicon Valley and the Peninsula.

“Across all of the California markets where we do business—San Diego, Los Angeles, the Peninsula, San Francisco—we are seeing a large desire to buy,” Foley said.

Wilson Meany engaged in an exhaustive vetting process before agreeing to sell the land to TRI Pointe. The master developer limited the circulation of details about its offering to a dozen selected homebuilders, Thacher said. Douglas Bauer, TRI Pointe’s chief executive, said Thacher and WMS partner Christopher Meany traveled to Southern California and conducted extensive research including discussions with his senior staff and the Irvine Co., which also specializes in master-planned communities.

“We spent over a year cultivating a relationship with Wilson Meany,” Bauer said. “Chris and Janice did a lot of research talking to the Irvine Co. about how well we’ve done there. They did a ton of background checks and due diligence.”

The Amelia at Bay Meadows is the fourth Bay Area housing project that TRI Pointe has embraced. This month it is opening the Chantrea subdivision in San Jose’s Silver Creek district where it plans 38 detached luxury homes that it plans to sell for $1 million or more each. Its Ironhorse subdivision in Morgan Hill includes 69 homes that will be priced in the low $600,000 range. It plans a 2013 opening for the Avelino subdivision in Mountain View with 59 town homes and detached single-family homes that it expects to price from the upper $700,000s to the low $900,000s. The Bay Meadows town homes should be priced in the low- to mid-$700,000s, Bauer said.

The region’s job generation and improving economic prospects are translating to rapidly escalating residential land values, Bauer said. “Basically, in the last two years, land prices have doubled. They’ve gone from $2 million an acre to $4 million an acre,” he said. He attributed the rise to an inadequate supply of development sites and the willingness of homebuyers to step to the plate. “There are plenty of well-qualified buyers that love the high-density product and are willing to pay $700,000 or $800,000 for a town home,” he said.

TRI is backed by a $150 million equity commitment from Starwood Capital Group Global LP. It also has extensive Southern California holdings. In total, TRI owns more than 1,200 lots in 13 communities in Northern and Southern California. Its goal is to be developing 1,000 homes a year in the state, including 400 annually in Northern California. He’s now begun searching for sites in Texas, Arizona and Washington state, said Bauer, a former president and chief operating officer for William Lyon Homes.

“We view ourselves as the next generation home builder,” he said. “I want to be the next public home builder in the next five to seven years. That is really the platform that we started two years ago.”

Though predicting the future remains an imprecise exercise, WMS’ Thacher says she would not be surprised to see Bay Meadows largely developed in the next five years, assuming the economy stays strong. With the housing starts, retail could logically be expected to follow, and as the community takes form, that should prove enticing to office tenants. WMS does not intend to do speculative office development at Bay Meadows.

“You look at what is happening with the big employers, and one of their challenges is recruiting employees. Part of that is offering a good environment,” she said. “With our adjacency to Caltrain, and retail and the park and to the extent there is high-quality housing nearby, all of it would seem to make [the offices] more attractive.”