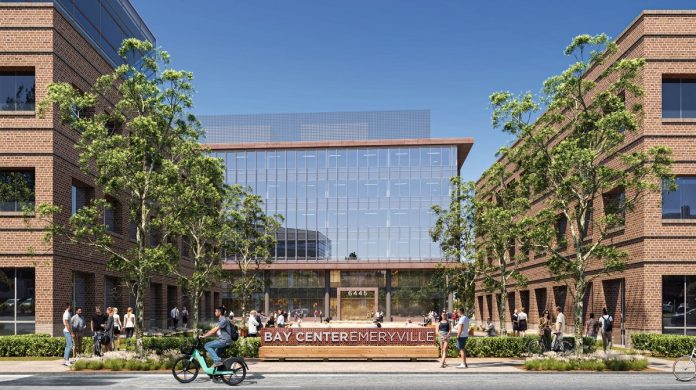 A revised proposal for a new 210,000 square foot life science building and a 596-space parking garage was met with general approval from the Emeryville Planning Commission during a study session last week – the project’s second study session this year. The project’s developer, Harvest Properties, is hoping to reposition Emeryville’s Bay Center into an innovative life science site. The architect is DGA Planning and the landscape architect is Studio Five Design.

Since the project’s last study session in March, Tom Wagner, partner at Harvest Properties, said his firm and the designers were able to revise the plans, taking into account the planning commission’s concerns, which were mostly related to site access for vehicles, the prevalence of surface parking and the parking garage screen. Wagner told the commission during the most recent meeting that the project design team had done its best to address all three while incorporating the project site’s three existing buildings, which would remain on site.

“Our goal is to expand the campus with a life science building that gives a nod to the existing architecture on the site yet is slightly more modern and efficient than the existing buildings,” Wagner said. “From our March 4 meeting, we’ve had an opportunity to further design the plans to better identify some of the public open space, further develop the parking garage, identify the public art and then address what we took away from the last meeting.”

The initial proposal was to construct a new, six-story tall building totaling 210,000 square feet of research and development space at 6475 Christie Ave. with a 505-slot parking garage, according to The Registry’s previous reporting. Under Emeryville code, the plans were also required to include about 10,500 square feet of open space. Currently, the 7.63-acre site contains three buildings: Building A is 121,762 square feet, Building B is 83,520 square feet while Building C is the largest at 123,286 square feet. Each of the existing buildings plus the new addition will be sited on individual plots.

The major revisions to the proposal that were presented during the study session involved the parking garage, the use of public space and included more details about the landscaping for the site. Most surface parking was eliminated in favor of increased open space, and the new parking structure was updated from a seven-story building to a six-story building but wider and with nearly 100 more parking stalls. All vehicular entries and exits are also restricted to 64th and 65th streets, which is a drop from three site access points to two. Public space would include multiple seating areas, a bike station and a dog run. Landscaping would entail the planting of native trees as well as native and adaptive grasses.

Plans for a public art display by Rob Ley were also presented. Ley is an artist based in Los Angeles who has completed public art displays across the country, according to his website. The display would be completed along the side of the parking garage and would entail more than 3,000 folded aluminum plates painted blue, green, gray and white. When finished, the art piece would be 47 feet tall and 275 feet long and would be meant to evoke the feeling of seeing a wave on the ocean.

During the meeting, comments from both commissioners and the public indicated that several believe the current revised plans are an improvement over the initial plans that were proposed. Commissioners asked questions related to the accessibility of the bike station and a bicycle circulation plan as well as encouraged making it more clear what areas of the site would be open to the public and which would not. But many were pleased with the decrease in surface parking and the new traffic flow.

“I agree that the site design and plan is a huge improvement over what was shown before,” said Commissioner Rodney Henmi. “The idea of the elimination of surface parking is really good. I actually support the accessible parking where it’s located. I think having it right next to the entry of that building is important, and I think a small amount of cars will have almost no impact on circulation.”