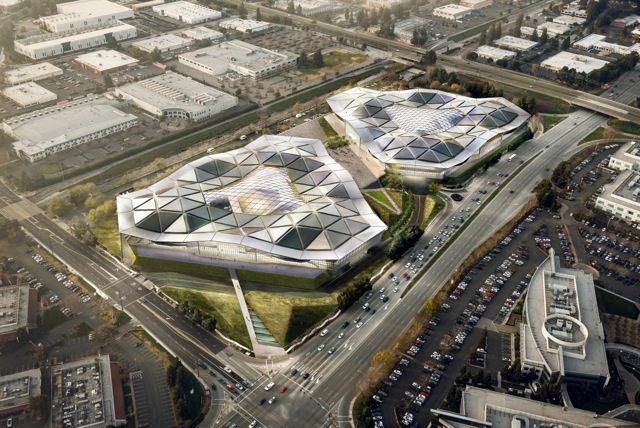 Southern California powerhouse Matt Construction Corp. has been selected as general contractor to build the first phase of the $300 million Nvidia Corp. campus in Santa Clara.

[contextly_sidebar id=”07a271ee2722d3f2cc3212cff22e6b5b”]The company displaces Webcor, which had been announced in February as the general contractor for the first 500,000 square feet of a one million square-foot development.

Nvidia proposes a two-building campus of matching triangles characterized most obviously by their massive expanse: 250,000 contiguous square feet on each of four floors. It is slated to accommodate 2,500 workers on 25 acres the company acquired in 2009.

The company hopes to start construction this fall on the first building; the second will follow as growth commands. The site is across the street from the company’s existing 2701 San Tomas Expressway headquarters where it owns and leases 19 buildings comprised of offices, laboratories and warehousing.

Jeff Birdwell, president of commercial development at Sares Regis Group of Northern California, the development manager for the project, said Matt “rose to the top” as the project team worked with Nvidia Corp. co-founder and Chief Executive Jen-Hsun Huang to refine the campus.

“As Nvidia’s vision became codified and the character of their building took more definitive shape, Matt rose to the top. They have delivered iconic, innovative projects in a fiscally responsible way,” Birdwell said.

The architecture, designed by Gensler, creates unique technical challenges atypical of the corporate campus. Bringing natural light to as much of the building’s exceptionally deep interior is among them. The Nvidia chief executive has posed questions to the development team about the rationale for making building roofs opaque, blocking out sun, sky and natural light, Birdwell said.

In a typical office building, most natural light comes in through the building’s windows and other edges. Window light can penetrate directly only about 15 feet and indirectly a few feet more. “When you start playing with these large floor plates, it becomes a different paradigm,” Birdwell said. “With these large floor plates, the roof becomes as important as the skin and the edges.”

Nvidia said Feb. 20 that it intended to build the Santa Clara campus blocks from where the computer graphics company started two decades ago. The company’s expertise has led it to touch everything from the gaming industry and Hollywood to car making, the Mars rover and medical devices. “We intend to extend our lead in visual computing and touch to every pixel of the billions of displays that now surround us,” the chief executive wrote in a Feb. 20 blog post on the Nvidia Web site to announce the new construction.

The company expects to fund $32 million in capital spending in its current fiscal year to finance the campus construction.

Matt’s qualifications matched those needed for the Nvidia project exactly because its experience transcends corporate real estate, and includes locations such as museums, where lighting is integral to the building’s core purpose, Birdwell said. Few people building corporate offices are thinking about light in that way.

Birdwell cited in particular the Los Angeles County Museum of Art. The LACMA Resnick Pavilion, where Matt Construction was general contractor, has, at 45,000 square feet, “the largest purpose-built, naturally lit, open-plan museum space in the world,” according to the Matt Web site. “Designed by Renzo Piano, it features a naturally lit open floor plan, concrete floor, and a saw-tooth roof with vertical glazing.” Gensler was the project architect.

Going with Matt, whose corporate headquarters is in Santa Fe Springs, Calif., southeast of downtown Los Angeles, also allows Nvidia to tap a larger construction talent pool, Birdwell said. While it is unpopular within the contracting profession to discuss it, there is concern in the industry at large and within the Nvidia team as well that the ranks of the Bay Area’s most talented construction professionals are worked thin. The region has seen a blossoming of new construction, primarily apartments and corporate headquarters and offices with a smattering of industrial.

The value of contracts for future construction in Silicon Valley, including Santa Clara and San Benito counties, rose more than 130 percent year-over-year in the first four months of 2013, to $1.44 billion, according to McGraw Hill Construction’s most recent tally. The value of like contracts is down 18 percent in the same year-on-year four-month comparison of the San Francisco-Oakland-Fremont metro area, but it remains nearly $1.2 billion—with two thirds of the year to accrue.

Birdwell said he is not at liberty to release the value of the construction contract with Matt.