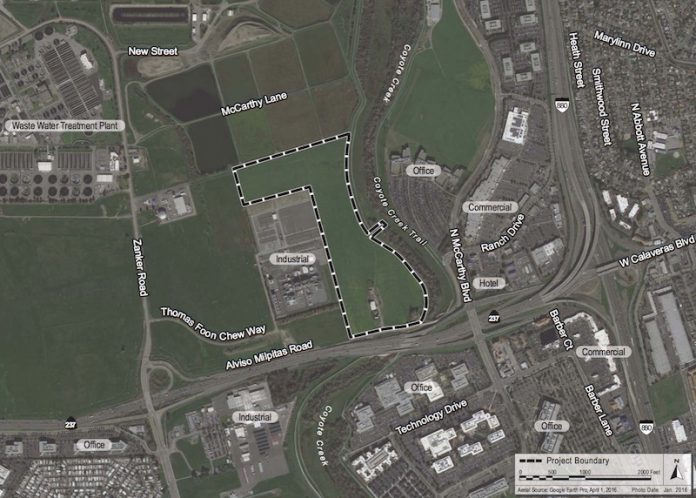 Landbanking in Silicon Valley is a thing again. In another transaction in San Jose, yet another technology giant is making a big bet and staking a claim in the self-proclaimed capital of Silicon Valley. Redmond-based Microsoft Corporation just acquired the Cilker Family 64.5-acre lot that sits on the corner of State Route 237 and Coyote Creek Trail. The company paid $73.2 million for the property, according to a report by the San Jose Mercury News. Microsoft had been listed as the billing applicant on the proposal to redevelop the project, therefore the ultimate outcome here is of little surprise.

The site today is mostly fallow farmland with some farming structures and three residences. The property’s owner, Cilker Orchards Management Group has submitted a development application to the City of San Jose to potentially construct light industrial and data center facilities on the site.

Cilker Orchards is a longstanding, family owned commercial real estate developer and property manager with deep roots in the local community. Cilker Orchards was originally founded in 1965 as an agricultural company and is the sole initiator of the present development proposal.

The project is located within the Alviso Master Plan area and is currently designated as Light Industrial under the General Plan and is zoned Agricultural Planned Development. A rezoning to Light Industrial is required for both development options.

The property is just south of the Bay and is surrounded by a mix of office, industrial and commercial uses in other directions, as well as some vacant parcels. Development was initially billed as speculative and no tenants were identified at the time the project was initially proposed to the city, however, Microsoft Corporation was listed as a billing applicant in planning documents.