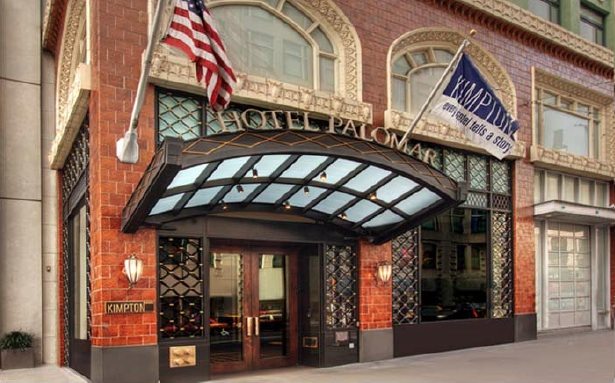 BETHESDA, MD, OCTOBER 25, 2012 – Pebblebrook Hotel Trust (NYSE: PEB) (the “Company”) today announced that it has acquired the Hotel Palomar San Francisco for $58.0 million. The 196-room, AAA fourdiamond, upper upscale, full-service boutique hotel is located in downtown San Francisco, California. The property will continue to be managed by Kimpton Hotels & Restaurants (“Kimpton”).!The transaction includes the assumption of a $27.2 million secured loan, with the balance of the purchase price funded by the Company with available cash.

“We’re extremely excited about the acquisition of the Hotel Palomar and the opportunity to further expand our presence in the highly desirable San Francisco market,” said Jon Bortz, Chairman, President and Chief Executive Officer of Pebblebrook Hotel Trust. “The hotel is attractively located at the nexus of three of San Francisco’s most dynamic neighborhoods: the South of Market district, the Financial District and Union Square. This ideal location is adjacent to the Westfield San Francisco Centre as well as the world famous Powell & Market cable car turntable, and just blocks from Moscone Convention Center and Union Square. In addition to the abundant and diverse collection of demand generators, the city’s location on the West Coast makes it a natural gateway to travelers from Asia. The strong leisure and business demand in this market, coupled with the extremely high barriers to entry, makes the Hotel Palomar San Francisco a very exciting addition to our portfolio.”

The 196-room Hotel Palomar San Francisco is conveniently located at the corner of Fourth and Market Streets in the heart of downtown San Francisco, and is on the same block as the Company’s recently acquired Hotel Milano. The location is ideal for business and leisure travelers alike, within walking distance of the Moscone Convention Center and Union Square, and proximate to the financial district and the rapidly growing South of Market (“SoMa”) office district. This hotel is adjacent to the Westfield San Francisco Shopping Centre, an iconic shopping destination that is home to Bloomingdale’s West Coast flagship store, the second largest Nordstrom in the United States, 170 world-class boutique shops and exceptional dining venues. In addition to the strong base of permanent demand generators, San Francisco will host the 34th America’s Cup, a world renowned sailing event that is projected to draw over 2.5 million spectators to the Bay Area in 2012 and 2013.

In 2011, the Hotel Palomar San Francisco operated at 81% occupancy, with an average daily rate (“ADR”) of $222 and room revenue per available room (“RevPAR”) of $178. During the next 12 months, the Company currently forecasts that the hotel will generate earnings before interest, taxes, depreciation and amortization (“EBITDA”) of $4.1 to $4.5 million and net operating income after capital reserves (“NOI”) of $3.4 to $3.8 million.

The Company will own a leasehold interest in the property through a long-term hotel lease with Jamestown Properties. There are currently 85 years remaining on the long-term lease, which expires in 2097. The $27.2 million secured loan that is being assumed in connection with the acquisition is a nonrecourse loan, with a fixed annual interest rate of 5.94%. The loan matures in September 2017.

“We’re excited to be growing our successful relationship with Kimpton Hotels & Restaurants,” continued Mr. Bortz. “The acquisition of the Hotel Palomar San Francisco marks our eighth Kimpton-managed hotel and their strong track record, market knowledge and extensive experience in operating high-quality boutique properties gives us immense confidence in the future of this hotel.”

The Company expects to incur approximately $1.0 million of costs related to the acquisition of the hotel that will be expensed as incurred.

The acquisition of the Hotel Palomar San Francisco brings the total number of properties in the Company’s portfolio to 25, comprising $2.0 billion of invested capital since the Company completed its initial public offering in December 2009.

About Kimpton Hotels & Restaurants
San Francisco-based Kimpton Hotels & Restaurants, a collection of boutique hotels and chef-driven restaurants in the US, is an acknowledged industry pioneer and was the first to bring the boutique hotel concept to America. In 1981 Bill Kimpton founded the company that today is well-known for making travelers feel welcomed and comfortable while away from home through authentic and unscripted customer care, stylish ambience and embodying a certain playfulness in its approach to programs and amenities. Adjacent to the hotels are locally-loved, top-rated, Kimpton restaurants. Kimpton leads the hospitality industry in ecological practices through its innovative EarthCare program that spans all hotels and restaurants. Market Metrix, a recognized authority and leader in feedback solutions, consistently ranks Kimpton above other hotel companies in luxury and upper upscale segments for customer satisfaction. Privately held Kimpton was recognized by Fortune Magazine as a Best Company to Work for in 2012. The company operates more than 50 hotels and more than 50 restaurants in 24 cities. For more information visit www.KimptonHotels.com or call 1-800-KIMPTON.