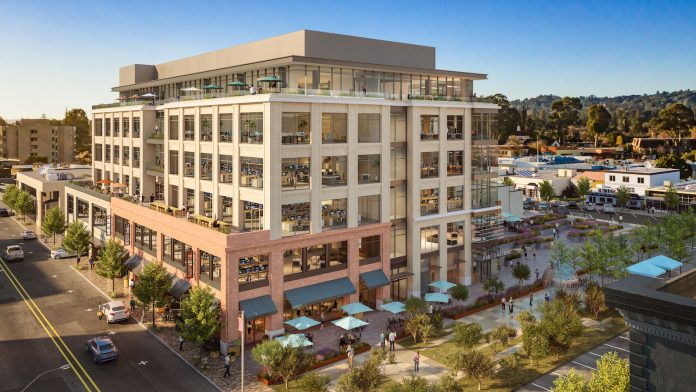 BURLINGAME, CA – SEPTEMBER 23, 2021 – Sares Regis Group of Northern  California (SRGNC) and Dostart Development Company (DDC) broke ground on approximately 185,000 developable square feet of office and retail space in the center of downtown Burlingame at the site of the long-vacant, 1.3-acre Burlingame  Post Office property at 220 Park Road. The project will be led by a joint venture of  SRGNC and DDC.

The building design will preserve the former Post Office lobby, converting it into an iconic ground floor retail space that will open onto the immediately adjacent  Burlingame Town Square, which will be constructed in coordination with the project. Additional new ground-floor retail space will also activate the pedestrian streetscape along Lorton Avenue. Each level of the office building will have generous private terraces delivering grand views of San Francisco to the North,  Hillsborough to the West, and the Bay to the East, while allowing for indoor/outdoor work opportunities and interaction with the adjacent public open space.

Both SRGNC and DDC have long histories of repositioning infill, transit-oriented projects in downtown areas throughout the Peninsula and Silicon Valley.  The team understands the importance of this historic site to the City and is committed to ensuring that it realizes its full potential for the community and its future tenants.

“The proposal for the development of this important downtown property promises a building that will contribute much to the fabric of downtown Burlingame while acknowledging the importance this legacy property has to the community,”  says City Mayor Ann O’Brien Keighran. “We trust that Sares Regis and Dostart Development have the vision and expertise to deliver a project that will improve our  downtown, contributing to the construction of a new Town Square that will serve as  a gathering place for our community for decades to come.”

Situated in the vibrant heart of downtown Burlingame with immediate access to public transit and amenities, the new office building will drive economic development at a time when retail uses depend on both day and evening traffic. The project will include the addition of 275 parking stalls that will be available for public parking during weekends and weekday evenings, further supporting downtown businesses. As a part of the project, $2M will be donated towards the future Town Square, to be located on the adjacent existing parking lot E. $3.5M will also be contributed towards affordable housing in the community.

The City has been working with the former owner and various potential developers of 220 Park Road for several years, spearheaded by a working group comprising council members Donna Colson and Michael Brownrigg.

“We’re excited to begin a new chapter for the City of Burlingame and its vibrant downtown center,” says David N.P. Hopkins, Chief Operating Officer of  Development at SRGNC. “Dostart Development has been a great partner, and the  City of Burlingame is behind our vision for a sustainable and community-focused  project.”

“Councilman Brownrigg and I have spent countless hours with the former post office owners and ultimately with Sares Regis and Dostart Development to help realize an important vision for the City of Burlingame, namely redevelopment of the historic post office and creation of a beautiful square in downtown  Burlingame—a vision that our residents spelled out in our 2010 Downtown Plan,”  says Councilwoman and former Mayor Donna Colson.

“We are thrilled to have broken ground on this one-of-a-kind project, which will bring new businesses and retail to the Burlingame community,” adds Mollie  Ricker, Partner of DDC.

The new office project will initially be marketed for lease to tenants as either a  single tenant or multi-tenant building, with a single floor of about 29,000 square feet being the minimum rentable space and 170,000 square feet for the entire building. Ben  Paul and Marc Pope of Cushman & Wakefield’s Burlingame office and Mike Moran and  Charlie Moran of CBRE are marketing the property for lease. The 17,000 square feet of retail space will be marketed by Steve Cutter and Chris Homs of Lockehouse Retail  Group.

Sares Regis Group of Northern California and its affiliates, Regis Homes Bay  Area and Regis Contractors Bay Area, are regional companies based in San Mateo,  California. As leading developers and managers of commercial and residential real estate in the western United States, the companies have more than 6.5 million square feet of commercial properties valued at over $7 billion and over 2,800  residential units under development. Since its inception, the company has acquired or developed 13.5 million square feet of commercial properties and 20,000  multifamily and residential housing units. For more information, please visit: www.SRGNC.com.

Dostart Development Company, LLC is one of the Silicon Valley’s premier commercial developers, with more than 25 years and nearly three million square feet of experience developing, redeveloping and investing in office space in  Silicon Valley and the San Francisco Peninsula. DDC is known for its local focus and expertise and for the high quality of its projects and tenants. DDC has also been a pioneer in Transit-Oriented Development and utilizing LEED standards for sustainable design. For more information, please visit: www.dostart.com.